Lateral inhibition: using amplitude discrimination to probe the balance between excitation and inhibition
Lateral inhibition is the brain's way of improving contrast between adjacent or near-adjacent cortical areas. In the 1960s, Nobel prize winner Georg Von Bekesy postulated the idea of lateral inhibition. The basic idea was that when you deliver a stimulus, brain activity will be correlated with the stimulus site, and the surrounding areas will be inhibited or turned off. Long story short, Von Bekesy’s predictions, which were based on sensory testing, turned out to be true. If you stimulate a single place on the skin repetitively, you will enhance a focused area of brain activity through lateral inhibition – the areas surrounding excited areas will be inhibited or suppressed. In this manner, the brain efficiently processes inputs. Much less energy is needed to turn things off than is needed to turn things on, and turning down the noise from areas surrounding the areas of interest increases the signal to noise ratio extremely rapidly.

Fast forward to more modern neuroscientific techniques, and we can actually observe changes in lateral inhibition. The image below is a set of images that depict a slice of brain (cortex) tissue stimulated at two sites (“x” marks the spot). The dark areas show where the cortex is activated. 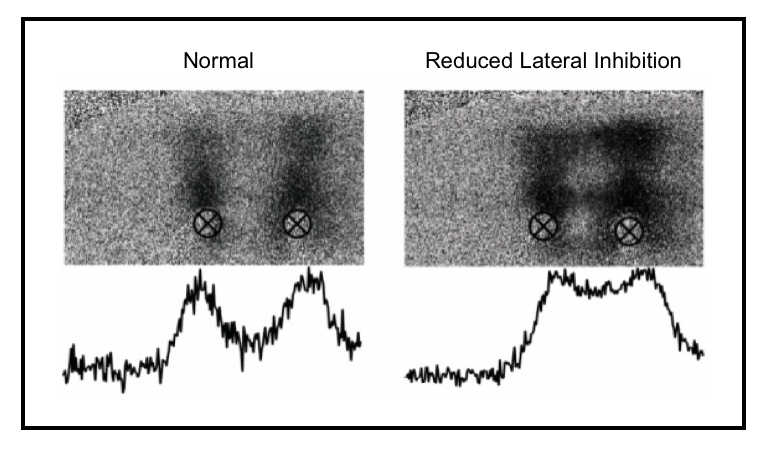 The difference between the conditions in the two images displayed above is that a drug has been administered on the right side that blocks inhibition (this is actually what is called a GABA antagonist; GABA is the predominant inhibitory neurotransmitter in the brain). This is done in order to mimic neurological disorders that are consistent with low or below normal GABA conditions. If the balance between excitation and inhibition is normal, then the brain can process inputs rapidly and fairly easily. If the balance is disrupted, then it becomes difficult to contrast-enhance these inputs.

Looking at the graphs below each of the cortex images, it is easy to see that the contrast between the two sites is lowered (or made worse) when the inhibition is lowered. Thus, you would predict that neurological conditions that have lower than normal GABA levels, GABA receptors that are not operating efficiently or some other condition that impacts GABA transmission/reception would have lower than normal contrast in information processing.

You might be wondering which populations would have lower than normal GABA. Low levels have been associated with the following things: 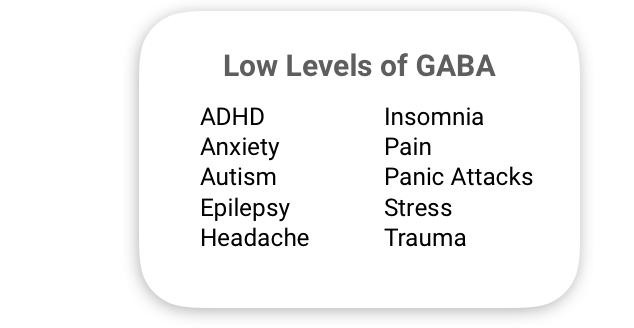 Too much GABA can cause problems as well. Too much, and you’ll probably go into a coma. Take a lot on a regular basis, like alcoholics do (alcohol is a GABA agonist) and you might go into alcohol withdrawal delirium when you try to quit drinking. In alcoholism, the withdrawal delirium tremens (DTs) result because the body quits making its own GABA. As a result of this, there is not enough inhibition when the alcoholic tries to “dry out” (to prevent the DTs, GABA agonists are often prescribed).

Some neurohacker’s claim that over-the-counter GABA supplements have a calming effect, but GABA does not cross the blood-brain barrier (unless it’s leaky, which is another topic).

How to measure lateral inhibition with Brain Gauge: Amplitude Discrimination
The easiest way to tell if lateral inhibition is intact (and/or if there is a good balance between excitation and inhibition in the brain) is to use the amplitude discrimination task. Two stimuli of different amplitudes are delivered to the finger tips. These two places on the skin project to two places in the brain that are side by side. When two stimuli are delivered by the Brain Gauge at the same time (simultaneously, or, as we refer to it, "ADsimult"), a subject will have a difficult time telling the stimuli apart if lateral inhibition is below norm (which could be due to impaired GABA). If they are not delivered at the same time but one after the other (sequentially, or, as we refer to it, "ADseq"), then, unless something else is malfunctioning, they should not have any trouble telling the two stimuli apart from each other. In both cases, the amplitude discrimination task is performed, and the subject has to determine which of two stimuli are larger. If there is a significant difference between the two metrics (i.e., AD simult >> ADseq) then we can tell that lateral inhibition is impaired, meaning that there is either too much excitation or not enough inhibition. 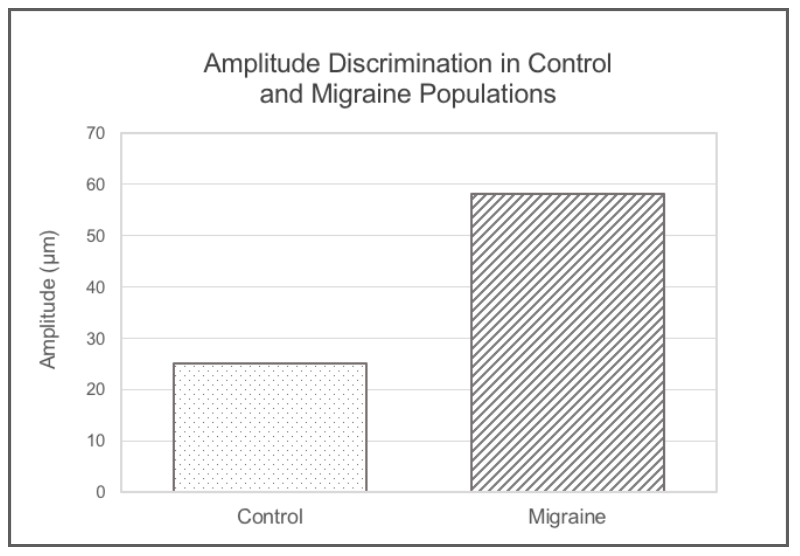 The graph above shows sample results from a headache and a concussion study.

Amplitude Discrimination (AD) data were collected from healthy controls and individuals with migraines. The average DLs or raw scores of ADsimult for the two groups is plotted at right (Note that smaller numbers indicate better performance). In this study, only ADsimult was collected from controls and individuals that had chronic headache conditions. Lower difference limens (DLs) on the AD tests indicate better or higher accuracy scores. Many studies (including our own) demonstrate that there are lower than normal GABA levels in this population, and some of the drug treatments that are used for headache sufferers are GABA agonists (one example is Topiramate).

Note that when doing a population study, the goal is simply to demonstrate differences between populations and doing only the simultaneous AD test is adequate. However, if you want to increase accuracy and sensitivity of the lateral inhibition measure, you need to compare the ADsimult score to the ADseq score. Subtle differences between individuals to perform the AD tasks can be taken into account if the both AD tests are administered. A recent concussion study that we performed tracked the results of over 200 student athletes post-concussion, and the lateral inhibition metric is plotted below. Note that with increased time post-concussion, the lateral inhibition metric (plotted as a z score) begins to approach the normative values, and this is consistent with the time course that has been observed in animal studies of concussion. 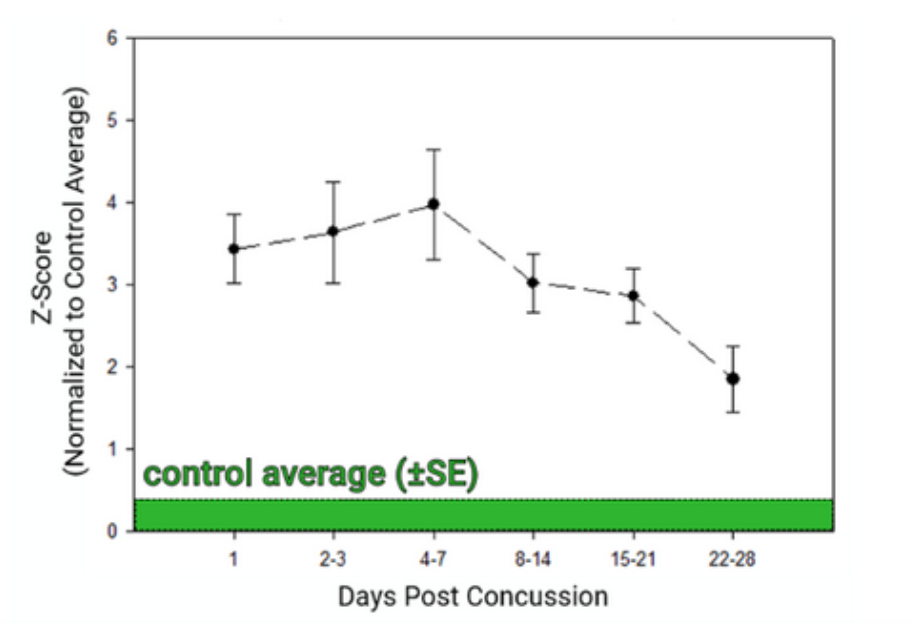 If you're interested in reading further on this topic, a good description of the metrics of lateral inhibition can be found here. You can read more about the headache study mentioned in this post here. To read further about the original idea of lateral inhibition, take a look at Von Bekesy’s book "Sensory Inhibition".