I’ve been in the research field for close to 40 years now (easily 40 if you count my years as an undergraduate biology major, when I was probably more interested in non-academic pursuits, but that is another story), and throughout that tenure, a question that has bothered people – as well as researchers – is why do people age at different rates? Why do some people age gracefully into their late 90s and others struggle through their 60s? As we began to do translational research (i.e., that brand of research where we apply our neurophysiological investigations to human subjects rather than animal subjects), one of the first questions that we wanted to look at was at the differences in information processing in the brains of different aged individuals. First thing we did was take a look at what others had done in our field – broadly defined as somatosensory testing – and found that sensory thresholds got worse with age. At that time, most somatosensory research put major emphasis on this feature that is predominantly influenced by skin sensitivity. But in our way of thinking, it really did not reflect what was going on in the brain, and that is what we were interested in. So, the first study that we did was to collect cortical metrics from individuals aged 18 through 65. The first test was to confirm what everyone else already knew (and people continue to do studies like this, but we’re really not sure why) which was that with age, sensory thresholds go up. This is a test that determines what the weakest tactile stimulus that you can detect.

The graph below shows the results from the threshold tests for different age groups. Note that with increasing age, thresholds go up (i.e., sensitivity goes down). This means that as subjects get older, the intensity of the stimulus has to be greater in order for it to be detected. And as mentioned before, it is largely reflective of changes in skin physiology where the detection and signal transduction is initiated. We’ll discuss the differences in dynamic and static threshold in a different post – that has been the topic of many subsequent papers, as the difference between those two types of detection thresholds is related to feed-forward inhibition. 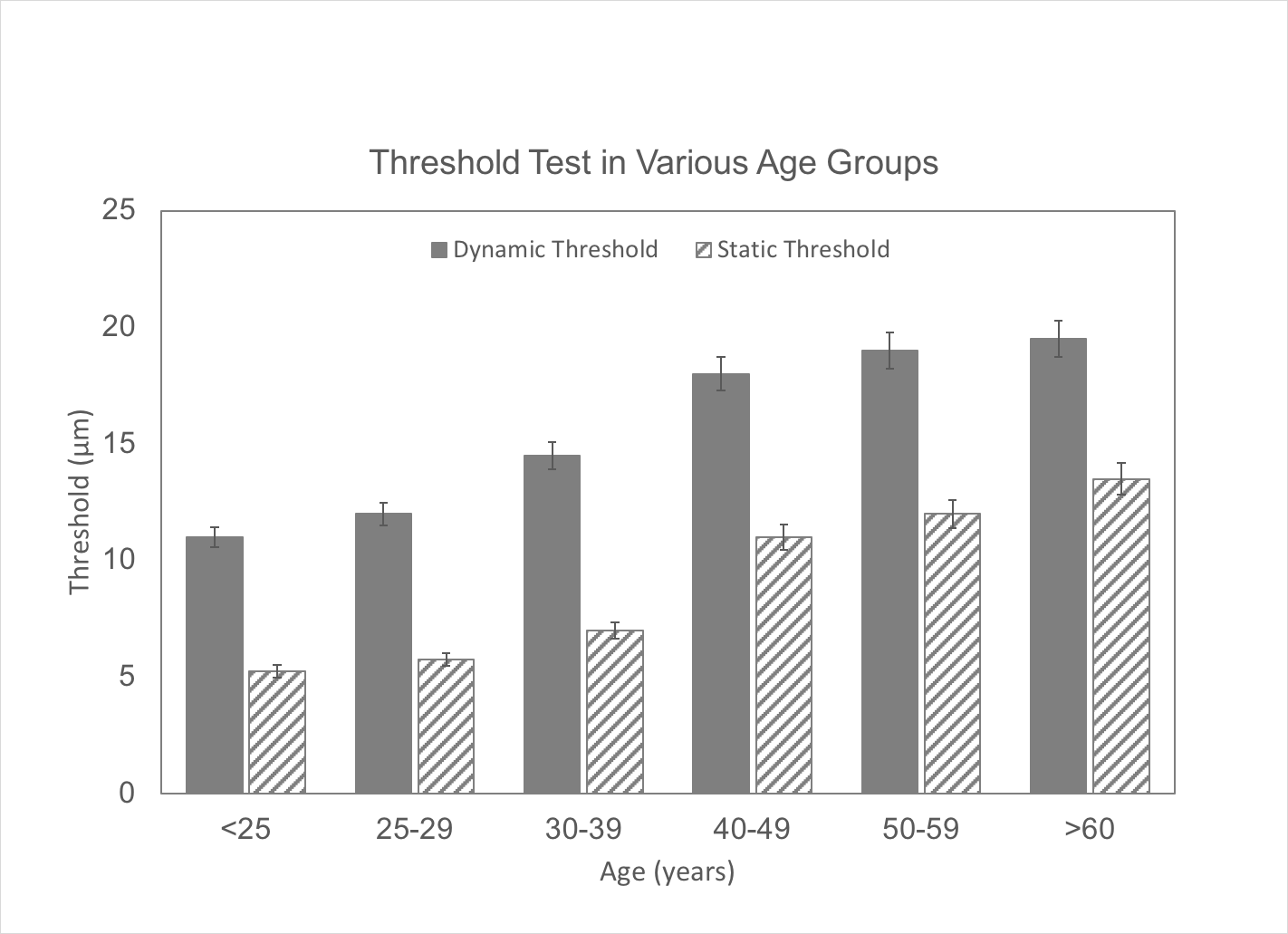 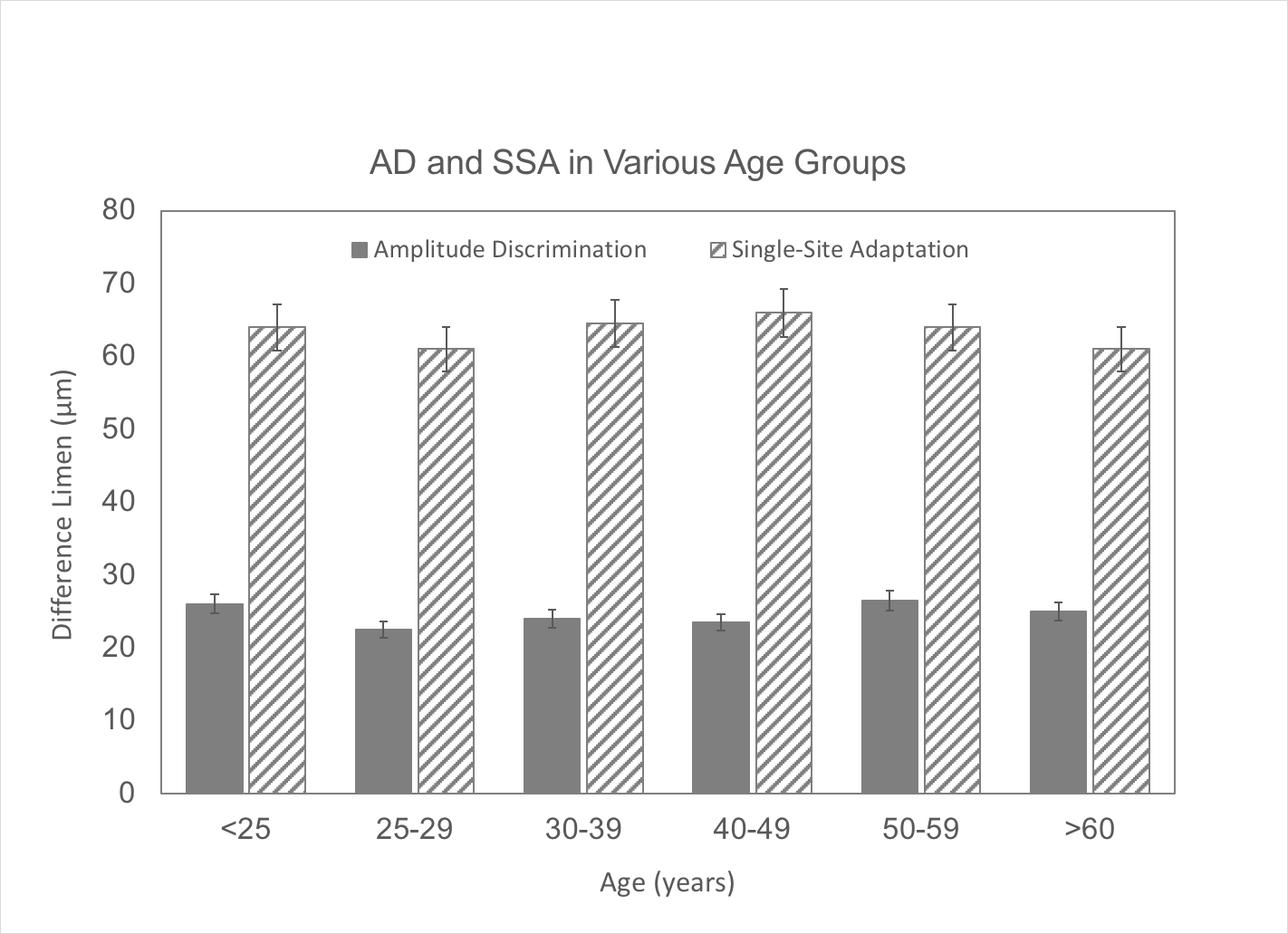 What does this mean? Basically, it’s good news for people that get older – as long you are healthy, your plasticity scores (which are reflective of your ability to learn new things) stay about the same. It also means that testing for detection thresholds, which used to be the norm, is really not that useful for studying aging (unless you want to measure some form of peripheral neuropathy or some other degenerative process going on in the periphery). As far as brain health is concerned, we should only be interested in measuring interactions that take place in the brain, not in the periphery. The tests that we designed for this (in this case, amplitude discrimination and single site adaptation) are “supra-threshold” testing methods – that is, the test stimuli are ~20-40 times as large as the stimuli used for threshold testing. This insures that we are delivering a strong signal to the cortex and that we can get a response that relates to the cortical interactions that are most important. The full publication on changes in cortical metrics with age can be found at Zhang et al, 2011.

The figure above shows the Brain Gauge results for 3 groups: controls, over 65 on no medications and over 65 on blood pressure medications. Note that the over 65 no med group is very similar to controls. However, with the group that is over 65 and on BP meds, amplitude discrimination is much higher (higher numbers are worse – this means the accuracy score will be lower) and the SSA score (higher numbers are better; difference between SSA and amp discrim correlates to plasticity).

Whether or not the impact on accuracy and plasticity was due to medications, or that was a coincidence is an area that obviously needs to be studied. Does being on beta blockers for extended periods of time lead to losses in brain plasticity? Or are older individuals that have lower brain plasticity for some other reason need beta blockers? If you dig deeply enough, you can find some old papers that declare that beta blockers do not cross the blood brain barrier, but were later disproven. My own opinion is that long term use of beta blockers has led to loss of brain plasticity, but the reader is left to draw their own conclusions.