When considering the health effects of “conventional” vs. “organic” food, the debate is usually centered around the consumer: Are there more nutrients in one or the other? Are pesticide/herbicide levels on conventional food significant enough to cause problems? Sometimes the discussion will veer towards which is more costly to the environment, or which is more efficient for feeding a growing world population. However the discussion rarely ventures to the subject of the health of the farmer growing the food, and thus applying the fertilizers, pesticides, and herbicides. But a recent article in Medical Hypotheses took an interesting look at how nitrogen based fertilizers may be effecting the cognitive health of farmers.

The table below shows the effect of a log-transormed measure of farm nitrogen fertilizers on per capita ethanol consumption in all Census region (1987 - 2006).

The authors propose a multifaceted explanation for the observed correlation, with both direct and indirect hypothesized causes. Most directly - exposure to N2O (even at very low levels) - can alter levels of Dopa, neurotransmitter that has been shown to cause an increase in alcohol consumption. Less directly, increased use of nitrogen fertilizer generally necessitates the use of more herbicides (such as glyphosate) to kill the nitrogen-loving weeds. In a previous paper, the authors showed a correlation between glyphosate use and severe ADHD - a condition often comorbid with alcoholism. Increased pesticide use is also more likely in areas of heavy nitrogen fertilizer use, and exposure to these chemicals has been linked to a range of neurodegenerative diseases. Heavy drinking can also increase the chances of having children with ADHD and autism spectrum disorders (Sundquist & Sundquist 2014). Moderate alcohol drinkers are also more likely to prefer inhaling higher levels of N2O than light drinkers (Zacny et al. 2008), again showing a correlation between the two substances and bringing us back full circle! 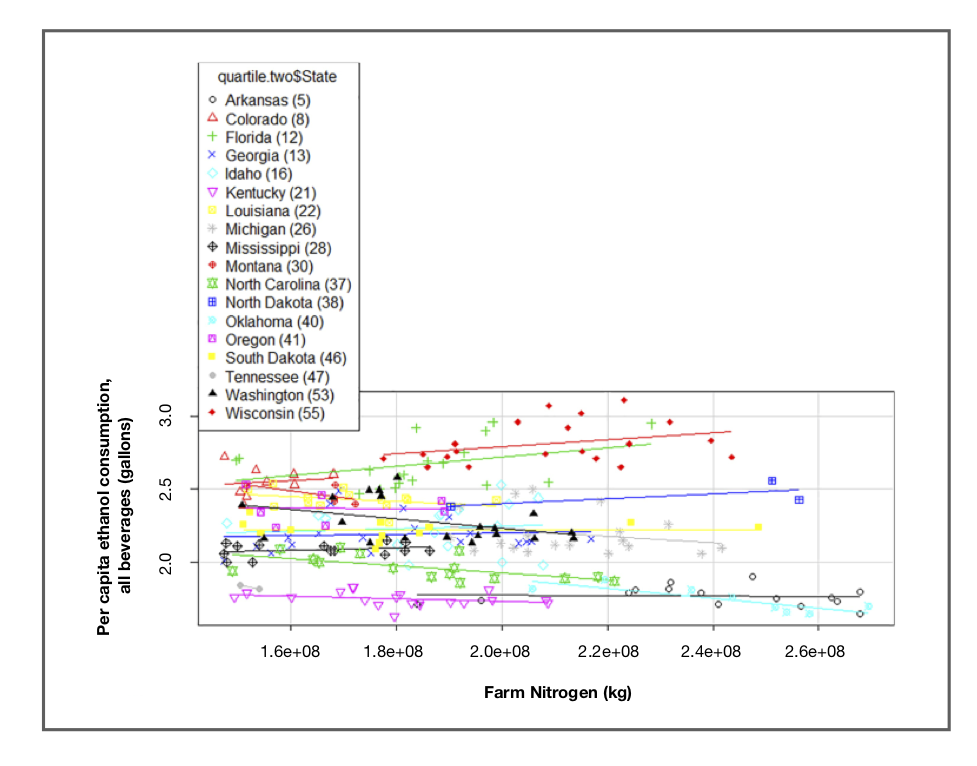 That may seem like a jumbled list of co-occuring conditions, but that’s how biology generally works. Especially in the field of medicine, doctors and researchers prefer simple cause-effect explanations for diseases, but it’s more common that a range of factors play a role, especially in the development of chronic diseases. In this example, it’s possible that there is a positive feedback loop between nitrogen fertilizer use and alcohol consumption. Regardless of why people are drinking more, we know that alcohol consumption affects cognition (see our previous blog post on drinking), an effect that is exacerbated when coupled with exposure to N2O, herbicides, and pesticides. This could inhibit farmers from thinking critically about their farming practices, preventing them from switching to more efficient and effective farming methods, and increasing the use of ferilizers as the soil is depleted from conventional farming methods.

This is a complex issue that encompasses a wide range of topics. We are not suggesting that all farmers who use nitrogen fertilizers have cognitive impairment, but we do think it’s important for farmers and their community members to be aware that these associations exist.

It's important to have the tools to take control of your own health. Science can’t always tell us exactly how a mix of factors affects our cognition, but with a tool like the Brain Gauge, you can quantify your individual brain health and track changes as you modify your lifestyle.