Exercise can give your brain an immediate boost – we conducted a simple study and report results.
Reaction time (RT) is one of the most common ways to measure brain activity. Simple reaction time - the time elapsed between a stimulus and corresponding response - has been used to assess cognitive function in both healthy and impaired individuals. Reaction time variability (RTvar) - a measure of the standard deviation of reaction time scores - can be used to quantify attention span, and tends to be higher in people with ADHD and other attention disorders.

We conducted a study which observed the effects of a single bout of exercise on reaction time in order to determine whether acute exercise could improve cognitive function.

In the study, 12 subjects aged 18-25 were asked to take a reaction time test on the Brain Gauge both before and after a 2 minutes exercise session (consisting of 30 jumping jacks and 30 pushups). The results from the study are displayed in the table below.

Both reaction time and reaction time variability significantly decreased post-exercise. As this was an extremely short period of exercise, it appears that the main effect was to get the heart rate up (note differences in average heart rate before each test) and make the subjects more alert.

Several other studies that monitored RT and RTvar introduced different conditions between the two measures. Introducing distractions (in the form of video games and cell phones) or some pharmacological insult (alcohol, cough syrup) significantly increased both metrics. This demonstrates that varying conditions or stimulation alone do not always yield improvements to reaction time.

It is interesting to note that even a very brief period of exercise has such a profound effect on brain function. This prompts a new question: What are the effects of a repeated or prolonged exercise session on reaction time?

Many studies have demonstrated that reaction time tends to increase with age. However, after collecting our own data on thousands of subjects across all age group, we have found that this is not necessarily the case. In fact, it appears that as people age, they tend to become generally less healthy for various reasons. Early stages of degenerative disorders, exposure to environmental toxins, chronic pain, and pharmacological insult (prescription medications, substance abuse, alcohol, etc.) all contribute to an general decrease in physical and cognitive health. Unfortunately, most studies simply do not exclude these impaired individuals. For example, a person with a significant drinking history, even if sober for 12 weeks (which would qualify them to participate in most studies), will have suffered long term damage that will affect their brain function.

One study reported the differences in simple reaction time (sRT) on subjects with significantly different physical activity (Sherwood and Selder, Medicine and Science in Sports, 1979). In the study, one group of subjects was classified “trained” and were physically active - running an average of 42 miles per week. The other group of subjects was classified as “untrained” or sedentary. The graph below is a plot of their reaction time results. Note that there is relatively little change in reaction time across the age groups for the trained subjects, but there is a significant change in the reaction time for the sedentary group. As subjects aged, it was lack of activity, and not age itself, which resulted in increased reaction times. This indicates that the cognitive decline that tends to emerge with age is a function of physical activity, and that people who exercise regularly can avoid substantial deficits to their brain function. 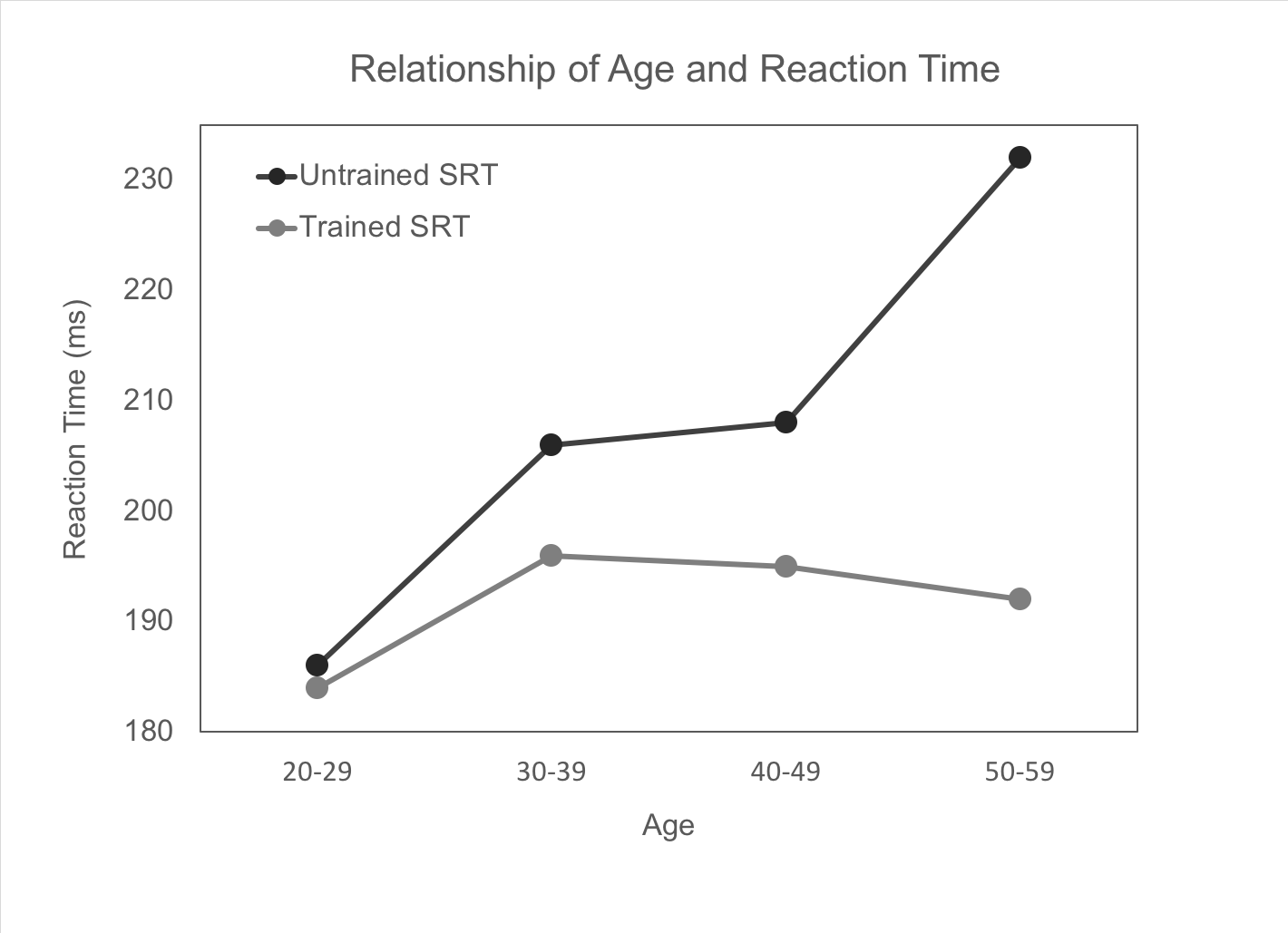