Probing brain function by vibrating the fingertips
One of our favorite quotes of the year is from someone who was considering purchase of a Brain Gauge for his practice. But then he consulted a lawyer, and the lawyer told him “you can’t prove that the Brain Gauge does anything other than test finger function.”

In the court of law, this is probably true. People have had enormous difficulty proving that anything means anything in that arena (including EEGs, MRIs, MEGs, etc.) and the Brain Gauge would be no exception. There is absolutely no way to prove that deficiencies in brain function that resulted from a car accident were caused by the car accident. All circumstantial.

The more important question is, why did we design the Brain Gauge to obtain measures of brain function by vibrating the finger tips? The simple answer to that question is that, from a neuroscience researcher’s perspective (which is where the design came from), the somatosensory system is an extremely high-fidelity system, and doing good experiments is all about being able to minimize the number of variables that do not remain constant (i.e., keep it simple!). By that we simply mean that if you deliver vibrations to two adjacent fingertips, you activate places in the brain that are adjacent. Modify the vibrations slightly and you modify what is felt at the fingertips. This is possible because the somatosensory system is somatotopic (move from one place on the skin to its nearest neighbor and you have moved to an adjacent place in the brain). From high school biology, most people have seen a picture of a homunculus: 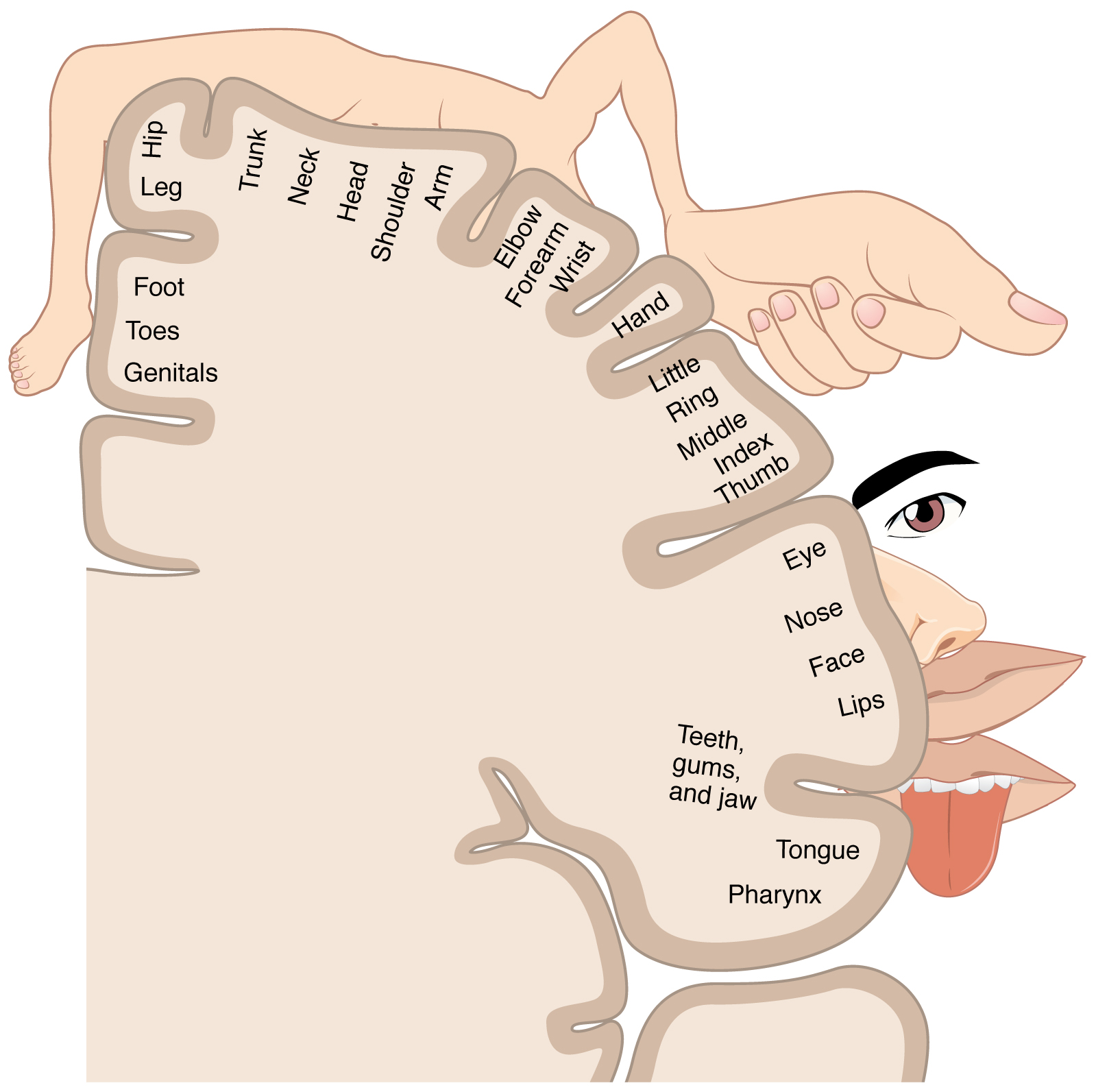 How does this compare with the visual system? Everybody likes to do experiments with vision because it is so easy to deliver the stimulus (change what’s on the computer monitor and you’ve changed the input to the visual system). And the visual system is retinotopic – it’s organized in the same topographic fashion as the somatosensory system. So obviously it should be easy to activate two adjacent places in the brain with a visual stimulus..….actually, to do that, you need to cover one eye and then deliver two precisely positioned stimuli to the retina, which is at the back of the eye – who wouldn’t want to have a couple of lasers shooting to the back of their eye?

Next, stimulating the fingertips activates a fairly localized area in the brain. You don’t get sensations to other parts of your body and consequently, the primary area of activation to the initial vibration is more or less localized to the parietal lobe (different tests direct the inputs to different parts of the brain for different types of computations, but other posts talk about that). If you want to focus your observations (i.e., measures) on the interactions between two places in the brain, then you want all the other areas to be relatively quiet. By now, you have probably guessed that this is not the case for visual system, and not only would it be pretty difficult to deliver that set of precision stimuli through the eyes, you would have to account for all the other environmental noise (lights, people walking nearby, etc.). In other words, you have a pretty good laboratory set up and walking around with you all the time.

Now what to do with that laboratory? It is essentially set up in the middle part of the brain (note where somatosensory cortex is located). 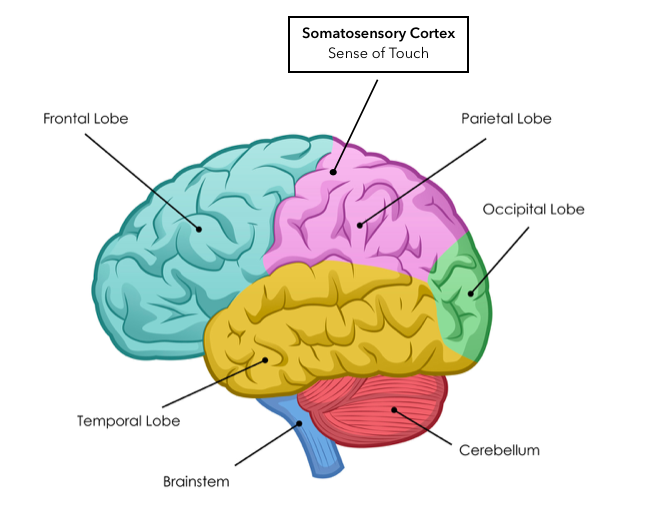 So now we can think of some activity that goes on in this region as being reflective of what the entire brain is doing, and this is referenced as systemic. The best way to think about a systemic change is to think about what happens if a drug were ingested. That drug would impact all parts of the brain roughly equally (there are different neurotransmitter distributions in different parts of the brain, but we’re going to ignore that for now) and it would impact any test the requires somatosensory cortex to be intact. A lot of neurological disorders or insults are systemic in nature and these include neurodevelopmental disorders (such as autism), neurodegenerative disorders (such as aging dementias), pharmacological insults (medications and substance abuse) and sometimes neurotrauma. What happens if only one part of the brain is damaged and somatosensory cortex is intact? The short answer is that the brain is a highly interconnected network, and many tasks require that connectivity to be intact. The longer answer is on posts on a couple of specific metrics (TOJ and Timing Perception). And the glaring omission from the above list is chronic pain (long answer on this is in the pain white paper here). Pain and the somatosensory system are highly inter-connected; you probably already realized that you have pain receptors in the skin (i.e., the somatosensory system), but you do not have pain receptors in the visual and auditory systems. Pain is an extremely important part of neurological health, and there is a direct interaction between chronic pain and the processing of mechanical tactile information that is used to derive some of the Brain Gauge scores.

One more way to think about this is that the Brain Gauge is used to send signals or inputs to different parts of the brain, and your brain processes those inputs to generate a perception of the stimulus pattern. The connectivity (which is both functional and anatomical between the areas of the brain that are activated by the vibrations in the fingers is critical in that processing and if a step in that process fails, then performance on the test will suffer. There is quite a bit of information known from decades of neuroscience experimentation about this connectivity and the Brain Gauge was designed to take advantage of it. To sum this up, in my opinion, saying that the Brain Gauge can only test finger function is a bit like saying that a test of reading comprehension only tests someone’s eyesight. There are quite a few processes that go on in the most-simple of experiments that engage brain activity, and while we are just scratching the surface of the potential of the Brain Gauge, we are pretty confident that we are not just testing finger function. A future post will describe our validation studies.