The following content has been written by Guest Contributor Carmela Wainwright.

Learning difficulties and long-term mental health issues are just some of the possible and glaring outcomes related to concussions. In fact, even mild head trauma can lead to the aforementioned issues. "Contrary to common assumptions, mild head injuries can cause long-term effects. These findings suggest that follow-up care after head injury, even for mild cases, is crucial, especially for patients showing risk factors for PTSD or depression," explains Dr. Murray B. Stein of The University of California San Diego. In general, doctors are begining to recognize evidence pointing to a real need to monitor the health of concussed individuals many months after sustaining head injuries. This post-concussive monitoring is crucial for concussion victims so that they can achieve the best possible recovery.

Exposure to concussion spans across a variety of sports arenas, but when talking about concussion, football is likely the sport that first comes to mind. Young football players are especially at risk of developing psychological problems through concussions. Even just a single season of playing football can stunt brain development in young athletes, particularly when it comes to the natural process of gray matter pruning. Just as the brain forms new neural connections and pathways through acquiring knowledge, it also undergoes regular pruning in order for unused connections to fall away, giving room for more growth and efficient development between the brain’s different parts. This is similar to how dead or unhealthy branches are pruned on trees in order to keep the entire plant healthy. And in the brain, Science Daily reveals that the decrease in gray matter pruning caused by concussions can directly affect the development of the frontal mode network, a part of the brain that’s involved in higher cognitive functions, including the ability to plan as well as control social behaviors.

Academic institutions are not the only ones concerned by the long-term psychological damage that can potentially be caused by concussions particularly to young athletes. The effects of concussions as well as the students’ ability to learn has an impact that goes well beyond the classroom and football field. In fact, in Maryville University’s graduate outlook for psychology students they note how there is a demand for professionals who understand the connection between “psychology and education.” The more studies reveal the connection between concussion and its impact on education and learning, the more there is a need for experts in the field. In fact, our own look at concussion testing in sports reveals not only the need for more experts, but also the need for more realistic methodologies for post-concussion tests and care.

Data we have obtained from close to 400 concussions across 12 NCAA schools supports the idea that both the Immediate Post-concussion Assessment and Cognitive Testing (ImPACT) as well as the Balance Error Scoring System (BESS) – both currently used in assessing concussion and tracking recovery – are not enough to ensure that student-athletes are fully recovered before returning to their sport. For example, in the first 0-2 days post-concussion (generally when the student-athlete is first evaluated by an athletic trainer), 68% of people scored as good or better than they did on their baseline test (when they were presumably un-concussed). More people (11 out of 118) did twice as good post-concussion (i.e. as score of 200% or better) than those who scored below 60% of their baseline score (8/118). Data can be visualized below: 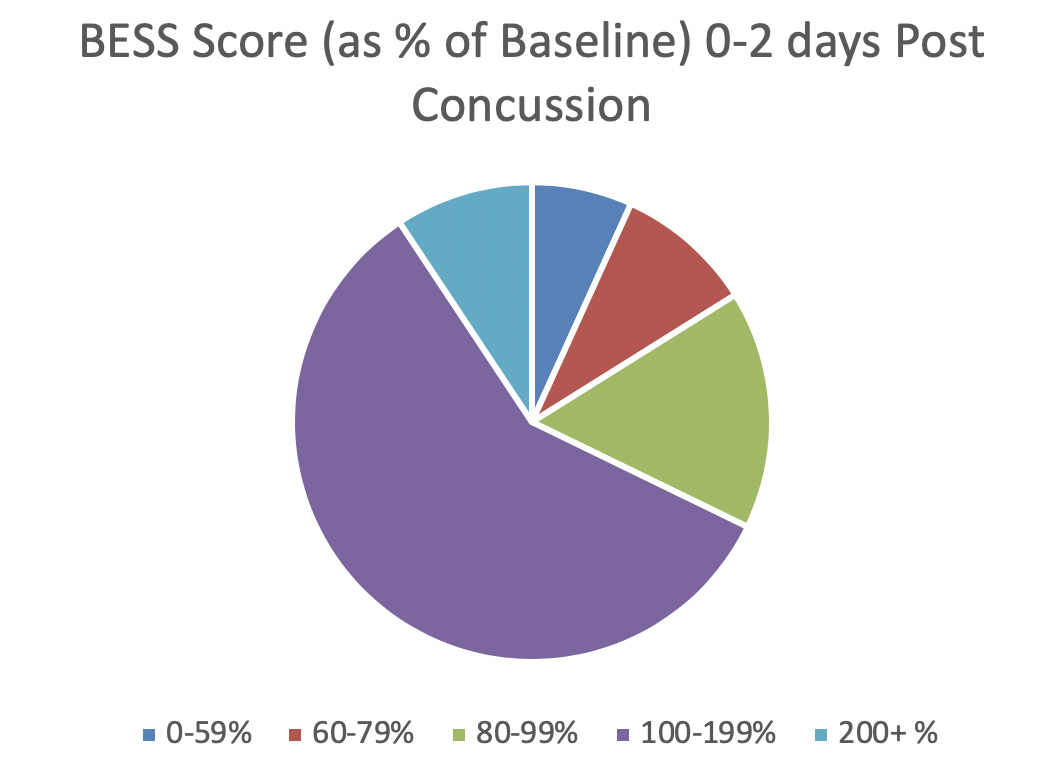 Part of the problem with this test is the reliance on a baseline score—of the 8 people who scored below 60% of their baseline, 4 had a baseline score of 0 or 1 errors out of a possible 60. In contrast, those that scored above 200% had baseline scores ranging from 6 to 47, with an average raw score of 18 errors!

ImPACT testing, based on our data, is better at detecting a concussion, but fails to accurately track to recovery. As shown in our previous post, athletes generally show a return to baseline total symptom score by 1 week post-concussion, and this is the marker that athletic trainers generally use to determine if an athlete is ready to return to play. Unfortunately, absence of symptoms does not mean full recovery from injury.

If we know that the current “gold-standard” of concussion testing relies on symptoms, and we know that symptoms are not a good marker of concussion, why is it so hard to set a new gold-standard based on objective measures, such as the Brain Gauge? A recent opinion article in JAMA Neurology sums up this topic quite nicely. In order to assess the effectiveness of a new method, you must compare it to the current gold-standard. But if the current gold-standard is flawed, and a new method indicates a concussion when the current method does not, you’re in a bit of a conundrum. Despite the large body of evidence showing that our current standards of concussion detection are flawed, as well as calls from researchers, politicians, athletic trainers, parents, doctors, and athletes for a better system to detect and track recovery from concussions, we still have a system in place that makes it difficult to implement a new method that is better than what has previously been determined to be a gold standard. We may be biased about the Brain Gauge, but it’s still an objective measure of brain health designed based on neurophysiological studies and scientifically proven to measure brain function.

While the academic community is rightly concerned about the post-concussion health and recovery of young athletes, they’re not the only ones who are at risk. Time Magazine recalls that there is a wide breadth of research that links concussions to the risk of developing long-term depression, whether in young players, college athletes, or retired NFL pros. Even more concerning, a recent meta-analysis published in JAMA Neurology concluded that there is a 2-fold increased risk of suicide among people who have been diagnosed with TBI/concussion compared to those who have not. One of the complications of detecting concussions is that the symptoms can be extremely vague, especially when the problem becomes chronic. While you may be able to tell at first that you are more tired or anxious than usual, or you have a slight headache, your can soon adjust to the new norm and forget that it really isn’t normal. These symptoms may become almost unperceivable, but the injury in the brain is still there. Given that lingering problems can double your chances of death by suicide, having a method to detect the problem and quantify whether treatment is working is literally an issue of life of death.

Considering all the risks related to depression and stunted cognitive development, both the medical and sporting communities need to work together to provide better post-concussive medical care and recovery to concussed athletes.