The Timing Perception measure (or Duration Discrimination) comes from the test that asks you “which stimulus lasted longer?”. This score is useful on its own, but you can gain even more insight into your brain health by comparing it to your Duration Discrimination with confound score. The difference between these two scores is based on a brain illusion - a mistake that your brain makes when comparing two sensations. But don't worry - if your brain is making this mistake, it means that it's healthy!

How the illusion is created
Check out the graph below, which shows how a single location in the brain reponds to a simple stimulus (like a finger tap). Time is plotted on the x-axis and absorbance is plotted on the y-axis. Absorbance reflects the activity levels of both neurons and neuroglia, non-neuronal cells of the central nervous system that provide support and protection for the brain's neurons. When the stimulus is stronger (the 400 micron plot), the glial and neural cells in your brain take longer to return to baseline activity levels. 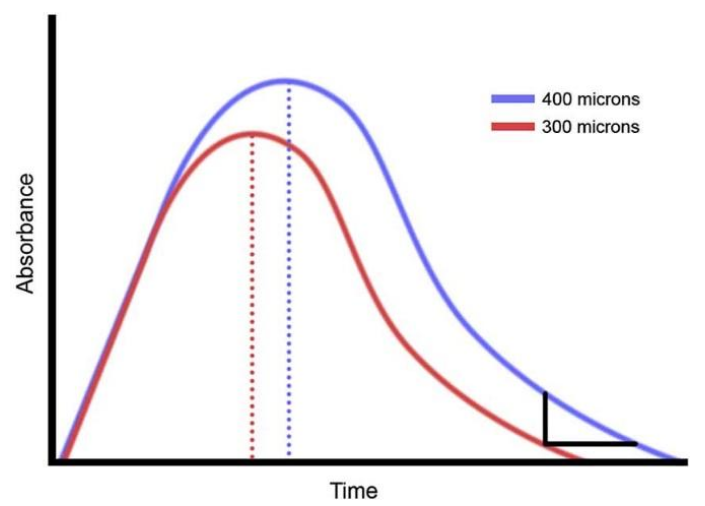 Now let’s see what happens in the same brain location if we use an extracellular electrode to measure the neural activity. This technique is not affected by the activation or inhibition of the glial cells.

The difference between these two graph allows us to design tests to measure impaired glial activity.

Applying the illusion to Brain Gauge tests
If we increase the strength of a Brain Gauge test stimulus by a tiny amount (not enough for a human to notice a difference), a healthy person's brain will perceive that the duration of that stimulus increased.

Therefore, when we increase the intensity on one of the stimuli during the Timing perception test, healthy controls tend to perform poorly. Healthy brains misinterpret the increased intensity as an increased duration. If this illusion disappears, and the patient has no problem identifying the durations of different stimuli regardless of their intensity - it means that neuron-glial interactions have been disrupted. This condition often emerges after brain injuries that cause neuroinflammation.

The intensity-duration illusion allows us to identify the presence of neuroinflammation in patients suffering from concussions and mTBI. We've also seens cases where the illusion was restored after certain treatments - quantifiable evidence of a healing brain.

Illusion confusion
Illusion-based neuroscience can be tricky. Currently, we only offer this test on request since it requires some clinical experience to interpret the results.

The intensity-duration illusion can also be absent even in patients suffering severe brain injuries. If timing perception is altered - maybe from a localized blow to the head - then patients might have trouble identifying duration differences at all.

In other conditions, such as chronic pain, the inflammation can be isolated; neuron-glial interactions are only disrupted in the brain hemisphere on the opposite the side of the pain site (pain in the left leg = inflammation in the right brain hemisphere). Patients suffering from localized chronic pain usually have wide variability in their scores on different hands.

To read our paper about the Duration Discrimination measure, click here.