Discussing the Temporal Order Judgement task
One of the cortical metrics that you get is called “TOJ” which stands for Temporal Order Judgement. This test delivers two taps, one to each of the two fingers positioned on the Brain Gauge, and queries “which came first?”. The test starts out easy (taps are initially 150 msec apart) and gets harder each time you get the question right (sort of like reading an eye chart – it gets more difficult the farther you progress). If you look at your TOJ raw score (on the bottom right hand side of the analysis page next to the label “TOJ”) you will most likely see a number in the range of 20-40. This is in milliseconds (msec) and is your raw score. Remember that the initial test (during training) was set at 150 msec, and the number that you see is what you tracked to. If your raw score was 30, that means that you started getting the TOJ query wrong around 30 msec. The final value is the average of the last several trials since most people track down and then oscillate around their actual best performance (this is called the difference limen). The lower the TOJ raw score, the better that you did. However this differs from the TOJ value that is presented on the bar graph or radar plot. That value is scaled to normative values – if you scored in the normative range, then you scored 100%. If you scored 0%, that means you were very far below the normative range. These scores do not go above 100% or below 0%, so if you are tracking yourself over a period of time (days, weeks, months) and your score is well above the norm or well below the norm, then it pays to note the raw score values. This is often the case for super-testers who do extremely well on this task: they might have a TOJ raw score of 30 msec (which would be 100% of the norm) that goes down to 15 msec after they have done something to improve their performance (nootropics, exercise, etc.). Significant neurological insult can make it very difficult for some people to score in the scaled TOJ graph range, but with recovery, we have seen many individuals progress from well out of range to normative values.

There have been lots of papers that used TOJ to measure differences between subjects with or without some condition. From these papers (a few of them are from research that we participated in) we can list some things that published research has demonstrated to have an impact on TOJ: 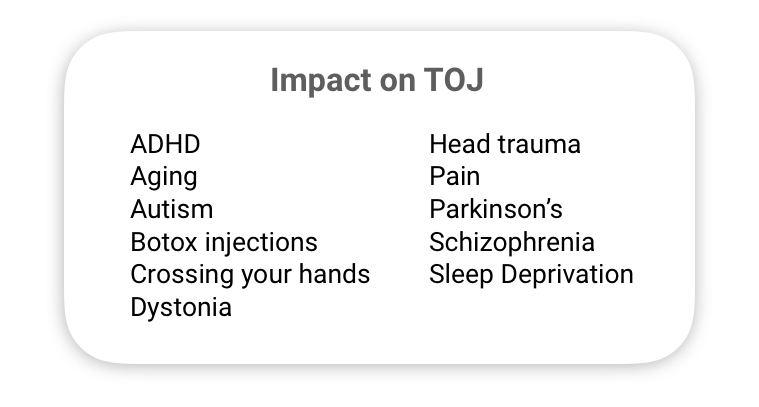 Note that if your TOJ scores are below normal, then it does not mean that you just had a botox injection to your forehead! This goes for everything else in the list – poor performance does not mean that you are in one of those categories. It just means that those populations do more poorly on TOJ than healthy control populations. And also note that just because it’s published, you might disagree with the publication. For example, stating that aging contributes to poor TOJ scores can be disputed – what really matters is whether or not the older cohort tested was healthy or not. Many studies do not exclude any neurological conditions when they do an aging study (this would be comparison of young adults to older adults). The point is, as people age, a larger portion of those people have more and more things that are neurologically non-optimal. For example, a much higher per centage of people in their 60s have chronic pain than do people in their 20s, and chronic pain significantly impacts tests such as TOJ. We have observed many healthy people in their 80s with above normative scores on all tests; it just depends on the overall neurological status.

How is TOJ and its meaning studied? There have been a wide range of studies that target identification of the network involved for TOJ. These include imaging studies of healthy controls performing the TOJ task, studies of individuals with known anatomical deficits and studies of neurological disorders (i.e., somewhat identifiable deficits). Taken together, it appears that parietal and temporal lobes are involved, and there is also evidence for frontal areas to be involved. From our own observations of concussed individuals, it appears that concussions that have impact to the front part of the head have the largest impact on TOJ while insults to the back of the head have much less impact (but these injuries tend to impact timing perception, which will be the topic of another report).