Can the Brain Gauge be used to decrease pain or improve brain function?

For many years, people have found modest success with treating different forms of chronic pain with different types of tactile stimulation (vibration, electrical stimuli, etc.). Results from those studies (and there were quite a few) are both divergent in terms of results obtained from tactile stimulation and inconclusive. In our own work, we demonstrated a reduced effect of high frequency tactile stimulation (this means we delivered 150 Hz vibration to the skin at the same time as a painful stimulus was delivered and it reduced the percept of pain). Here’s the graph from that study (stolen from the dissertation from a former grad student, Yongbiao Li, 2003), done on willing human participants: 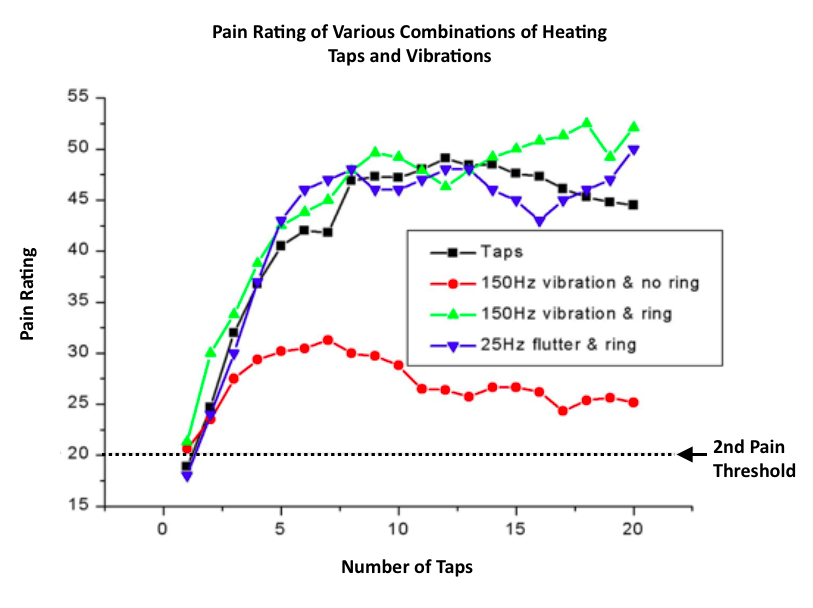 In that study, we delivered 4 different types of stimuli to the thenar eminence (that’s the big pad of muscles on your hand below your thumb). After stimulus delivery (which was a tap of 48 degrees C with or without some type of concurrent vibration), the subject was asked to give a pain rating (0 being lowest and 100 being absolutely intolerable). The taps were delivered 3 seconds apart and with windup (the technical term for the increase in pain that goes along with this type of tapping), the pain rating goes up for 3 conditions. However, for a fourth condition, the pain rating did not go up nearly as much. This condition was for high frequency (150 Hz with no ring surrounding the stimulator to suppress the spread of the vibration). Low (25 Hz) vs. high (150Hz) frequencies activate different mechanoreceptors in the skin and these project to different places in the cortex. Since this is an introduction to the tactile discrimination task, keep in mind that the high frequency stimulus – which suppressed the painful stimulus – projects to the upper cortical layers in areas 3b/1 (the painful stimuli activate adjacent cortical area 3a). How do the high frequencies suppress pain? It happens that we have written quite a bit about this, but a picture is worth many words. The images below are pictures of the part of the brain that processes tactile inputs. Note that dark areas indicate activity and light areas indicate inhibition (activity is actually turned off). The areas that are active in response to 25 Hz stimulation and noxious stimulation are in completely different areas. The high frequency response is initially in the same area as the 25 Hz area (top row), but with longer duration stimuli (bottom row), actually turns off the same area that is active in the noxious image. Thus, the prediction is that high frequency (such as 150 or 200 Hz) would have a counter effect at the cortical level on a noxious stimulus, while 25 Hz stimulus would not (which is what happened in our example above).

We do realize that what most people care about, in terms of pain, is how to get rid of it. Targeting area 3a, in this author’s opinion, is a pretty reasonable way to go, especially for intractable chronic pain. We’ll talk about the history of targeting area 3a in a future post (lesions in that area reduced pain until 1969 when some “prominent” neurosurgeons stated that a frontal lobotomy would be better - that did not catch on!). But the short version of this is that we think targeting area 3a in the cortex (which is deeply buried, unfortunately) with TMS, ultrasound, tDCS, PEMF, etc. is a promising way to go. If you are going to experiment on yourself, we do not recommend trying to surgically lesion that area.

You can read more about pain and the Brain Gauge here.