Some of my previous research had to do with the investigation of minicolumns – the smallest functional unit in the cortex – and how the organizational scheme created by minicolumnar structure impacted information processing in the cortex. There was a good bit of research on that particular topic in the autism field, and a scientist named Manuel Casanova (you can see his website here ) had discovered significant differences in the organization of minicolumns in individuals with autism. His studies utilized post-mortem histology, and he showed that there were 30% more minicolumns in individuals with autism than people without autism. A sample of his work is reproduced below: 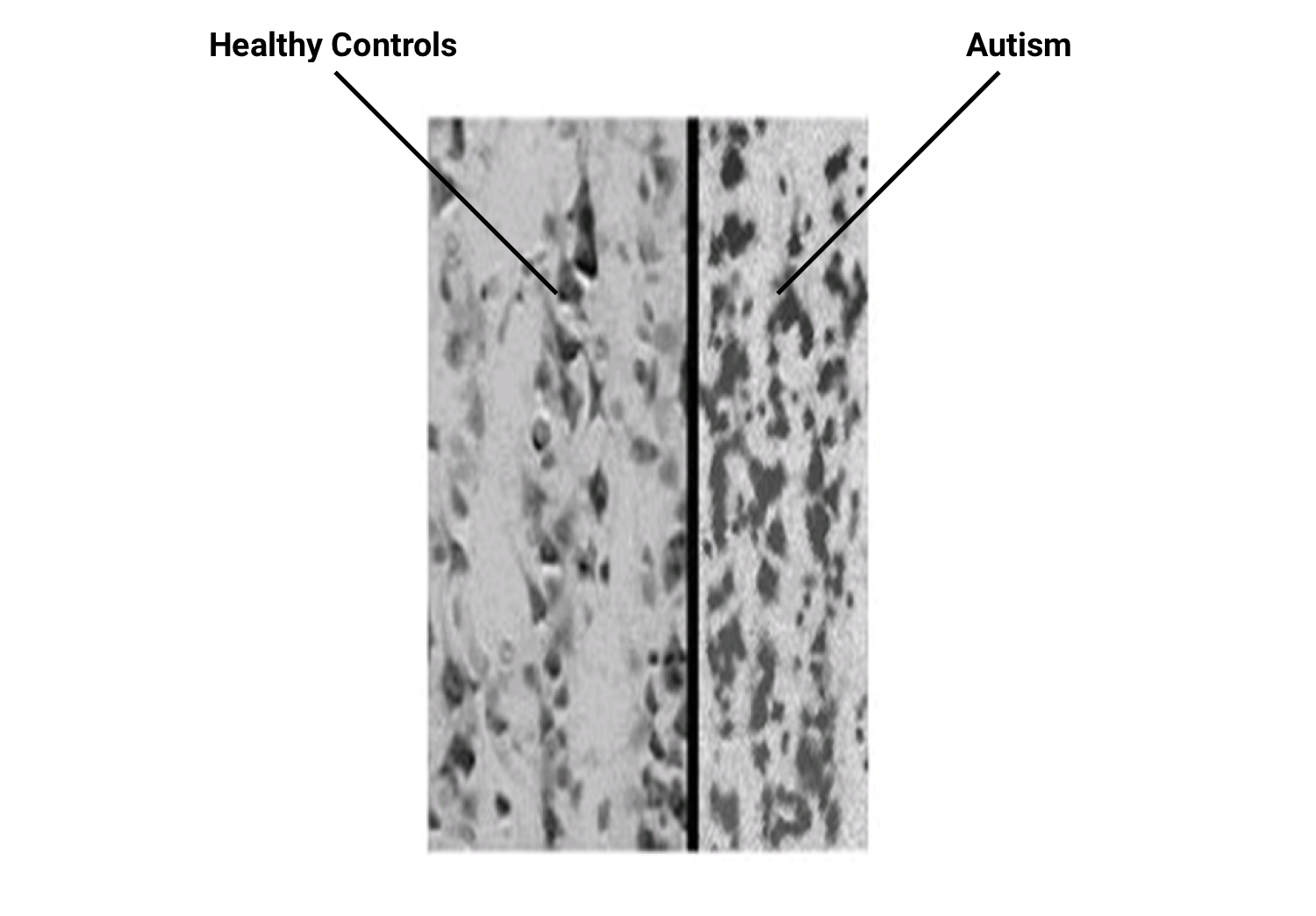 The image shows histological sections (stained for cell bodies) of controls on the left and autism on the right. Note the higher density of the vertical arrays of cells on the right side. This finding led us to design some sensory tasks to demonstrate that sensory percept would be altered in autism. To summarize, we found that the test results were consistent with the idea that (1) individuals with autism were functionally impacted by the higher density of minicolumns in a positive manner and (2) interactions between minicolumns were significantly altered in a negative or developmentally disabled manner. It was speculated that this increased density of minicolumns came at a cost – that is, because the cells were so tightly packed (and in a less organized manner) the connections between the minicolumns were disrupted. In particular, the inhibitory connections, or those mediated by GABA (the primary inhibitory neurotransmitter in the cortex), were impacted.

One thing that we found in our initial study was that plasticity of the individual with autism was significantly impacted and this was consistent with the idea that GABA deficits could play a significant role in the disorder.
In order to standardize the testing a bit better, we developed some new tasks that focused on the subject’s ability to adapt to a stimulus. Adaptation is very sensitive to GABA deficits and your ability to adapt to a stimulus is synonymous with plasticity (you can read more about that here).

We found some significant differences between our control subjects and our autism subjects. To summarize, this is what we found with adults with autism.

Since our initial study, many other researchers have adopted the Brain Gauge methods for studying autism and in particular, adolescents with autism. The plasticity deficit has been consistently found and reported in other studies and that measure has also been correlated with GABA deficits with MRS imaging (you can read that study here). What that correlation means is that there is less GABA in the individual with autism, and that the less there is, the lower their plasticity score was.

The feedforward inhibition metric in autism is also well below normal (more details on this in a later post), and this hints that there is not only an inhibitory deficit due to low GABA, but that it is probably a GABAb deficit (two types of GABA in the brain: GABAa and GABAb; another article will detail this, but if you want to read about it in the scientific paper you can do so here). There aren't any known methods for differentiating GABAa vs. GABAb in the living human cortex, although this information could be very significant for guiding treatment. This highlights the importance of the methods employed by the Brain Gauge and the potential to learn more with further research.

Want to read more?
We have been involved with more than 19 scientific journal publications in the field of austism and have made them available for further reading. Use the search bar on our publications page and type the key word "autism" to display all related publications.