The effects of caffeine on brain function and how to measure it.
Though media outlets often portray 'biohacking' as a hightech, modern trend, people have been searching for ways to improve their brain function for centuries.

Back in the 1400s, Arabian monks first noted the energizing and mood-enhancing effects of hot drinks made from the beans of the coffee tree. However, caffeine - the chemical responsible for coffee's stimulating effects - was not identified until 1819, when the German chemist Friedlieb Ferdinand Runge isolated it from coffee. Since this discovery, many papers have been published illustrating both the positive and negative effects of caffeine and coffee consumption. The effects are typically quantified by measuring each subject's reaction time - the interval between stimulus presentation and the subject's response - both before and after consuming caffeine. Reaction time in turn has been shown to be a very sensitive indicator for cognitive function and focus.

In a 1934 study, Ralph Cheney measured the reaction times of subjects across 3 different conditions: no caffeine, caffeinated coffee and caffeine in capsule form. He found that both conditions of caffeine improved reaction time, but these subject's results returned to non-caffeine levels after 24 hours. Several studies since then have likewise demonstrated improvements in reaction time after ingestion of moderate amounts of caffeine, but some of those studies also reported that high doses caffeine led to a degradation in performance. With such a range of positive and negative outcomes, a question naturally arises: at what doses does caffeine have no effect? 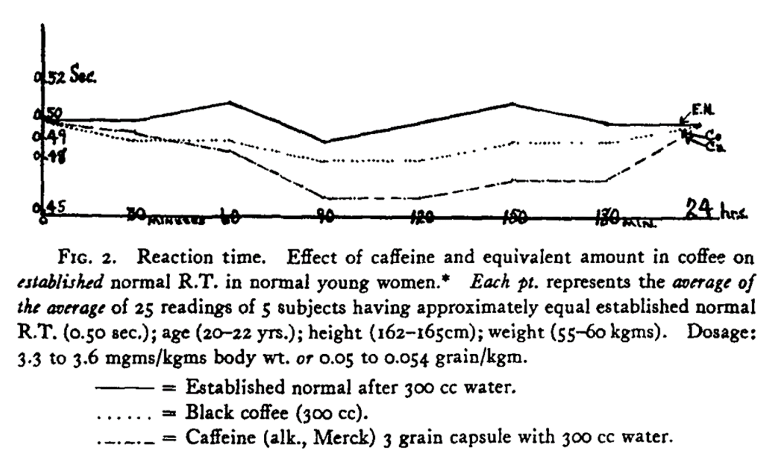 Note that in the Cheney paper (and in most papers prior to 1950) caffeine was given in relative doses - that is, the subjects received doses that were dependent on their body weight (measured of milligrams per kilogram). However, most recent studies employ a standard dose (e.g. 200mg), regardless of body weight. This kind of dosage is similar to the caffeine consumption recommendations given by media outlets and health organizations today.

The only way to figure out your optimal dose of caffeine is through personal experimentation. Calculate how much caffeine you consume from all sources each day, and looks for correlations between these measurement and your Brain Gauge scores.

In a future report, we'll take a closer look at the literature involving caffeine, coffee, and cognitive enhancement. We'll answer such questions as: