Getting a pet dog is often suggested to people who need extra motivation to exercise a little more. Having a dog will force you to go outside and go on walks that you might otherwise take, and that, in turn, can help improve your physical health.

But what about your mental health? Can pets have a significant effect on our mental well-being? Your first thought with that question may be along the lines of the companionship pets supply, maybe their role as a stress-reducer, particularly in those with mental health disorders, or even the indirect effects of improved mental health from extra exercise our dogs may force us into.

While those may have some truth to them, Yolken et al. (2019) explored how exposure to dogs and cats at a young age may actually have long-term effects on mental health and could influence the development of schizophrenia. 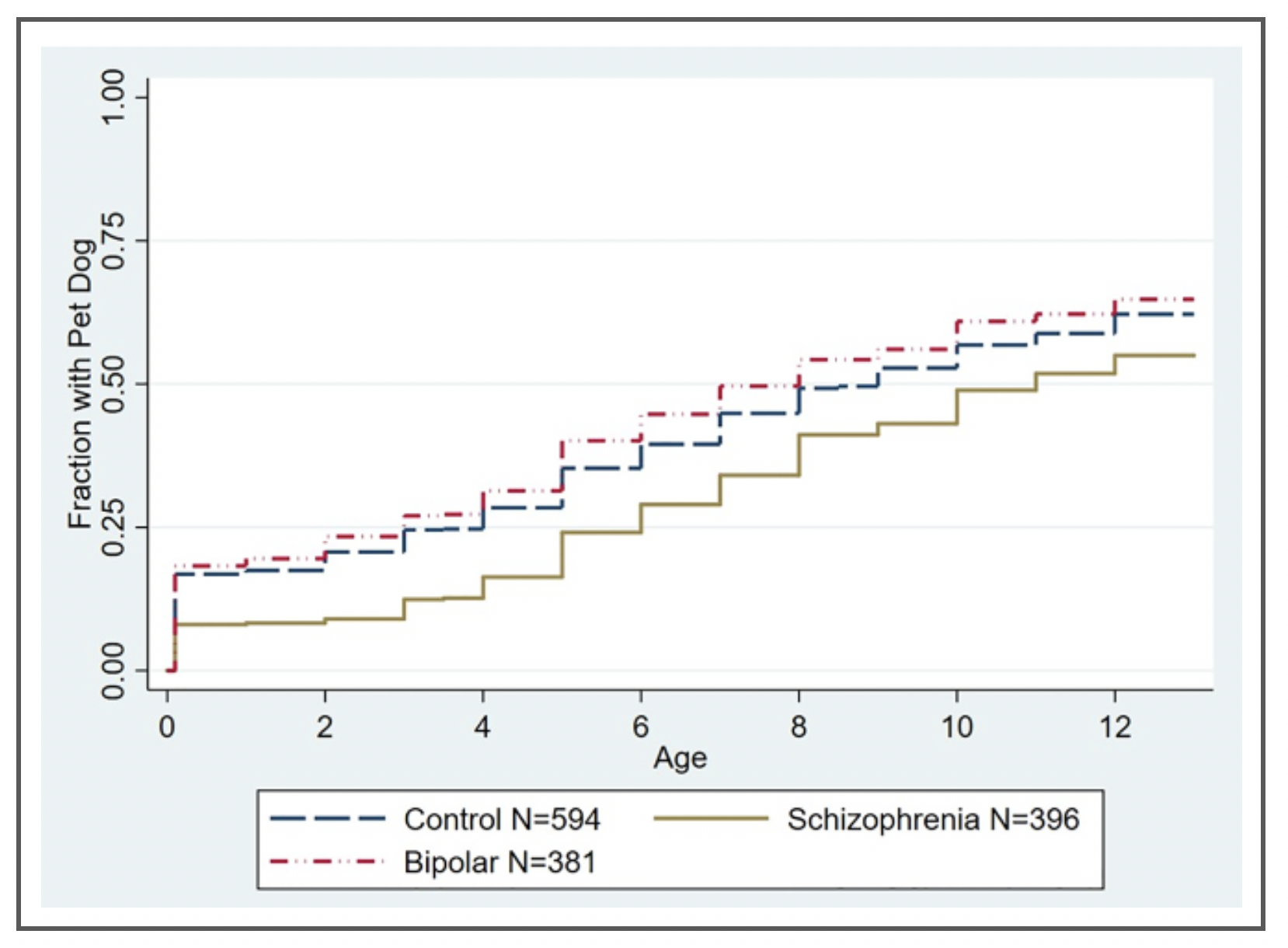 Yolken et al. (2919) Fig. 1: Accumulated proportion of study participants with a pet dog at or before the given age. Plot separates subjects by adult diagnosis of bipolar disorder (red dash), schizophrenia (gold), or control (blue dash). 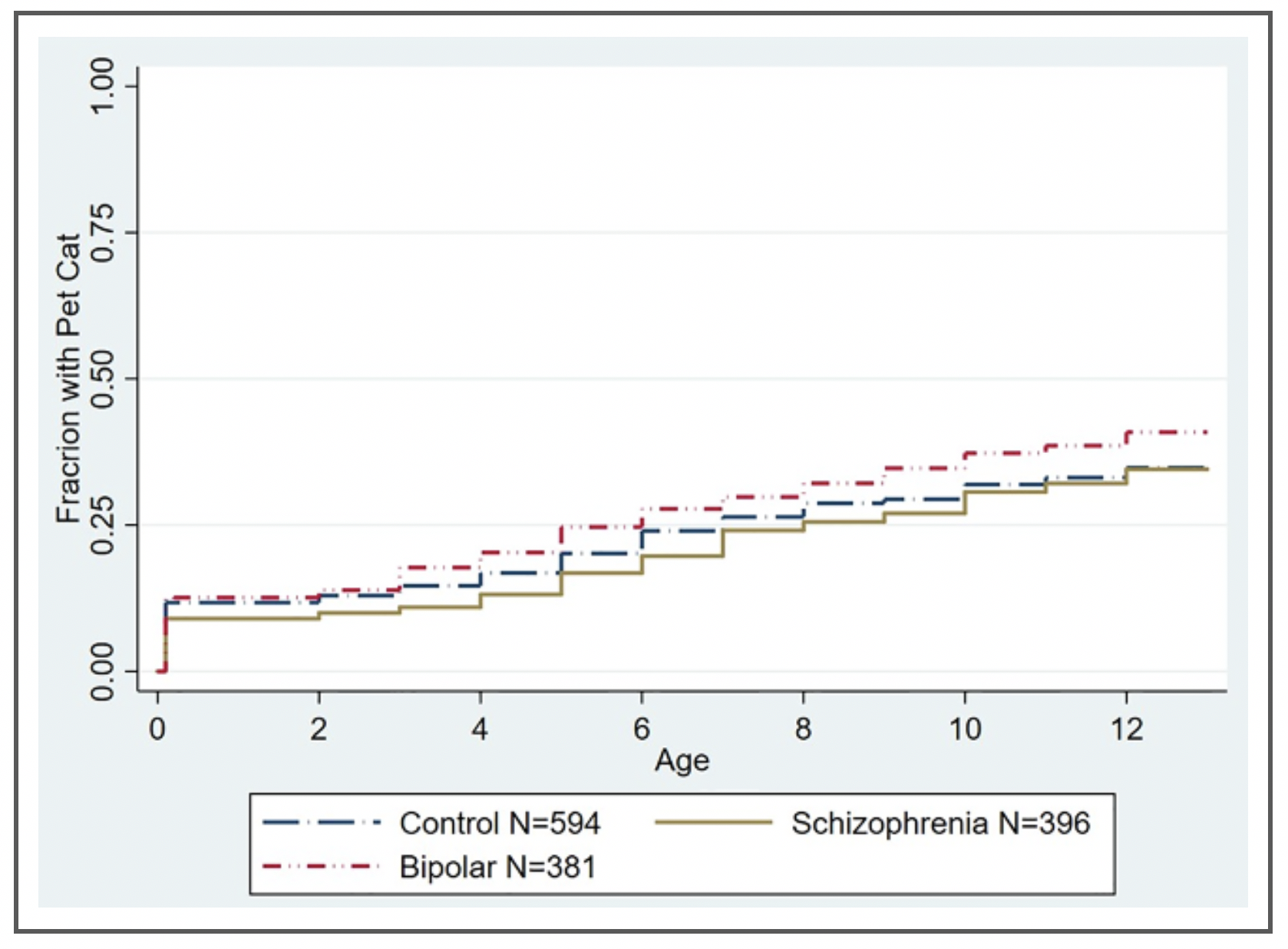 Yolken et al. (2919) Fig. 3: Accumulated proportion of study participants with a pet cat at or before the given age. Plot separates subjects by adult diagnosis of bipolar disorder (red dash), schizophrenia (gold), or control (blue dash).

The authors admit that this is a correlational study, and as noted in previous posts, correlation does not always mean causation. It is possible that the association between having a dog early in life and later development of schizophrenia is due to a secondary socioeconomical factor that makes it more likely to have a dog AND less likely to develop schizophrenia. However, there is reasonable plausibility that is not the case in this instance. Given the relatively large sample size and the accounting for basic socioeconomic variables, the authors are reasonably certain that this is a true causal association.

What might be the reason for dogs decreasing later development of schizophrenia, you may ask? Data presented in this paper cannot answer that question, but it does provide clues. As noted, the largest risk reduction occurs when exposure to a pet dog occurs before the age of 3, which is likely also associated with the mother having a pet dog while pregnant (although this part is only presumed and was not asked by the authors). The “protective” effect of the dog decreases as the age that the dog enters the household increases. Therefore, this points the researchers to hypothesize that the immune system may be playing a role.

The authors cite previous studies showing a reduced risk of immune-mediated conditions, such as asthma and food allergies, in kids who grew up with a pet dog (Bufford et al. 2008; Azad et al. 2013; Fall et al. 2015; Jhun et al. 2016; Severance et al. 2016). The “hygiene hypothesis” states that exposure to a more diverse array of microbes during early childhood development actually helps the body to develop a robust immune system that is less susceptible to environmental triggers later in life.

The mechanism by which the immune system effects psychological health is complex and poorly understood. One potential pathway is through the “attenuation of the stress response and subsequent cortisol release and cytokine generation in response to antigenic stimuli” (Yolken et al. 2019). Alternatively (or possibly concurrently), having a dog around may change the composition of the pet owner’s gut microbiome. We know that a significant portion of our neurotransmitters are actually produced by microbes in our guts, and the presence/absence/imbalance of these neurotransmitters can effect our psychological state, so this could likely be a contributor (more about the gut-brain connection can be found in our previous post here.)

There are still many unanswered questions brought up by this study, such as why do cats not offer this same protective effect? And why is there no effect on bipolar disorder from early childhood exposure to dogs? Assuming that the dog/schizophrenia association is true and due to an immune/microbiome trigger, we are lead to conclude that there is still a lot that we don’t know or understand about the trillions of microscopic beings all around us and the profound impact that they can have on our lives.

Regardless of what the mechanism behind the association, or even if it is simply a correlation without causation, why not find a four-legged canine friend at your local shelter? At the very least, it may get you outside a moving more often, and we know that is good for your brain as well!