It's Halloween, which means that in just a few hours parents across the country will have their hands full with children toting plastic pumpkins, grocery bags and pillowcases full of sugary treats.

For many parents, this is the scariest part about Halloween. Children who consume too much sugar are at risk for obesity, diabetes, and cavities. Binging on their Halloween haul can also lead to a harrowing sugar-crash hangover, and upon waking up for school the next day they might be even more terrifying than the night before.

Rationing your child's candy stash and general sugar intake is a good way to promote his or her long-term health. However, both you and your sugar-fiend offspring will be happy to hear that some sweets can actually be good for you.

Eating moderate amounts of dark chocolate has been linked to dozens of positive health outcomes. Chocolate is now touted as a "superfood" by many doctors and dieticians, thanks to its ability to reduce inflammation and promote better cardiovascular health. There's even evidence that antioxidants in cacao beans - which are ground up and combined with milk and sugar to make chocolate - can inhibit the growth of cancer cells.

More recently, researchers have investigated chocolate's effects on the nervous system. Preliminary studies found that a moderate intake of chocolate can protect neurons and glial cells (non-conducting nervous system that support and protect neurons) from aging-related damage. Further research suggested that the flavonoids in cacao beans were absorbed by the hippocampus, a region of the brain responsible for spatial navigation and consolidating experiences into long-term memory. Alzheimer's patients typically exhibit damage to the hippocampus in the earliest stages of the disease. Flavonoids can increase blood flow to regions of the brain, protecting neurons from harmful free-radicals and even promoting new neural connections.

If you've ever felt energized or relaxed after treating yourself to some R&R (Reeses and Rolos, that is), you're not alone. A 2013 review of the chocoliterature found that chocolate had a positive effect on mood in 5 out of 8 studies. Research now suggests that polyphenols - a broad class of compounds that includes flavonoids - are responsible for many of the sweet health benefits of chocolate. Subjects who are given high-polyphenol chocolate show fewer symptoms of depression and anxiety, and feel more calm and content, than control subjects who consume chocolate containing no polyphenols.

The brain health effects of chocolate can even be detected after a single fun-sized dose. A single high-polyphenol cocoa drink improved scores on memory quizzes and cognitive tests in healthy adults.

But parents, don’t confiscate your childs entire Halloween loot in the name of better health just yet. The mood- and brain-boosting effects of indulging in a chocolate bar (or three) can be seen in children as well. And with Brain Gauge, you can quantify these effects to find the sugary dose that keeps your child happy without turning them into a chocoholic.

In the example below, a 10-year old boy completed a standard Brain Gauge testing session to establish baseline scores. He was then given an Endangered Species Fair Trade chocolate bar, one of his personal favorites. Twenty minutes later (19 and a half minutes after he had finished the treat) he completed another Brain Gauge test. 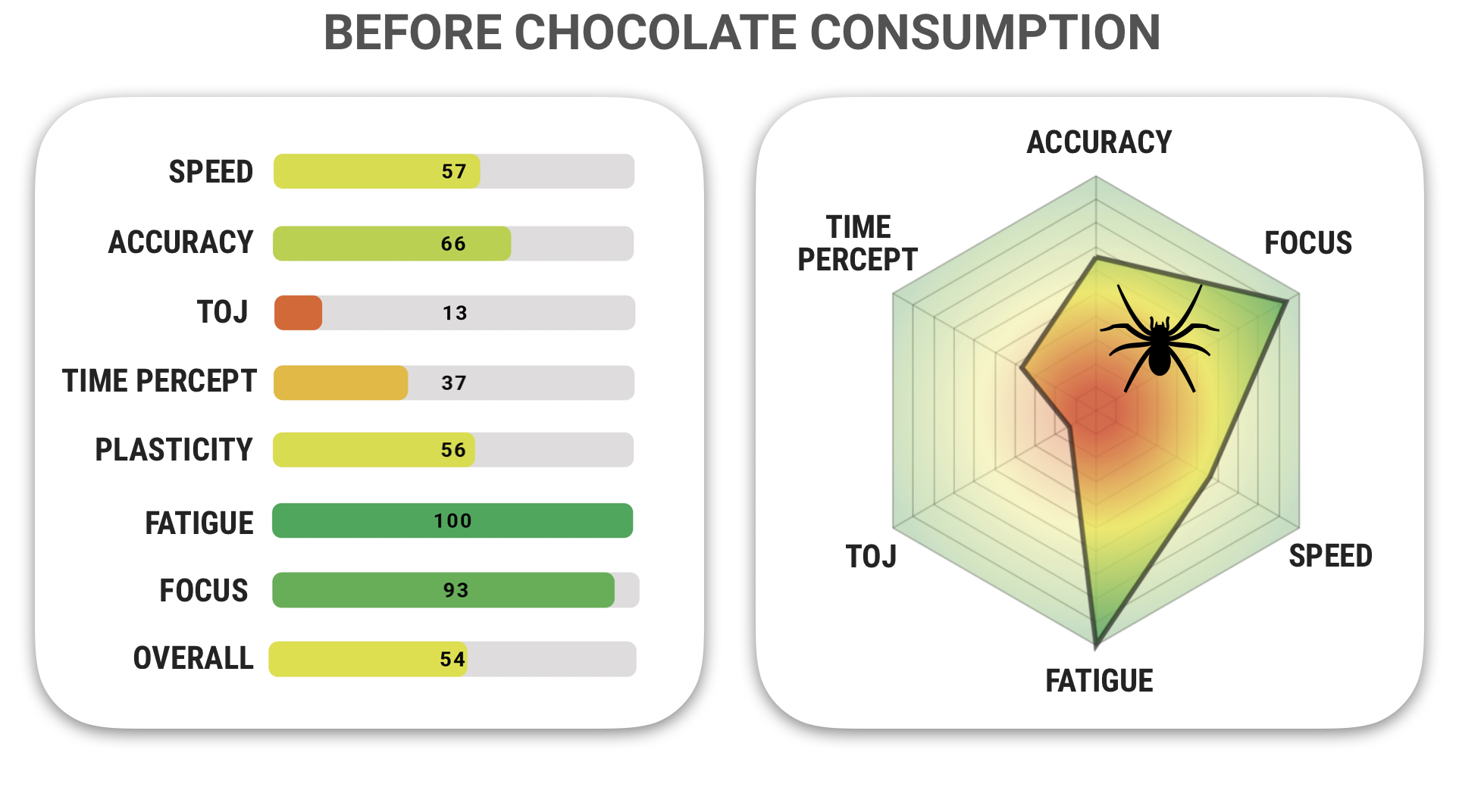 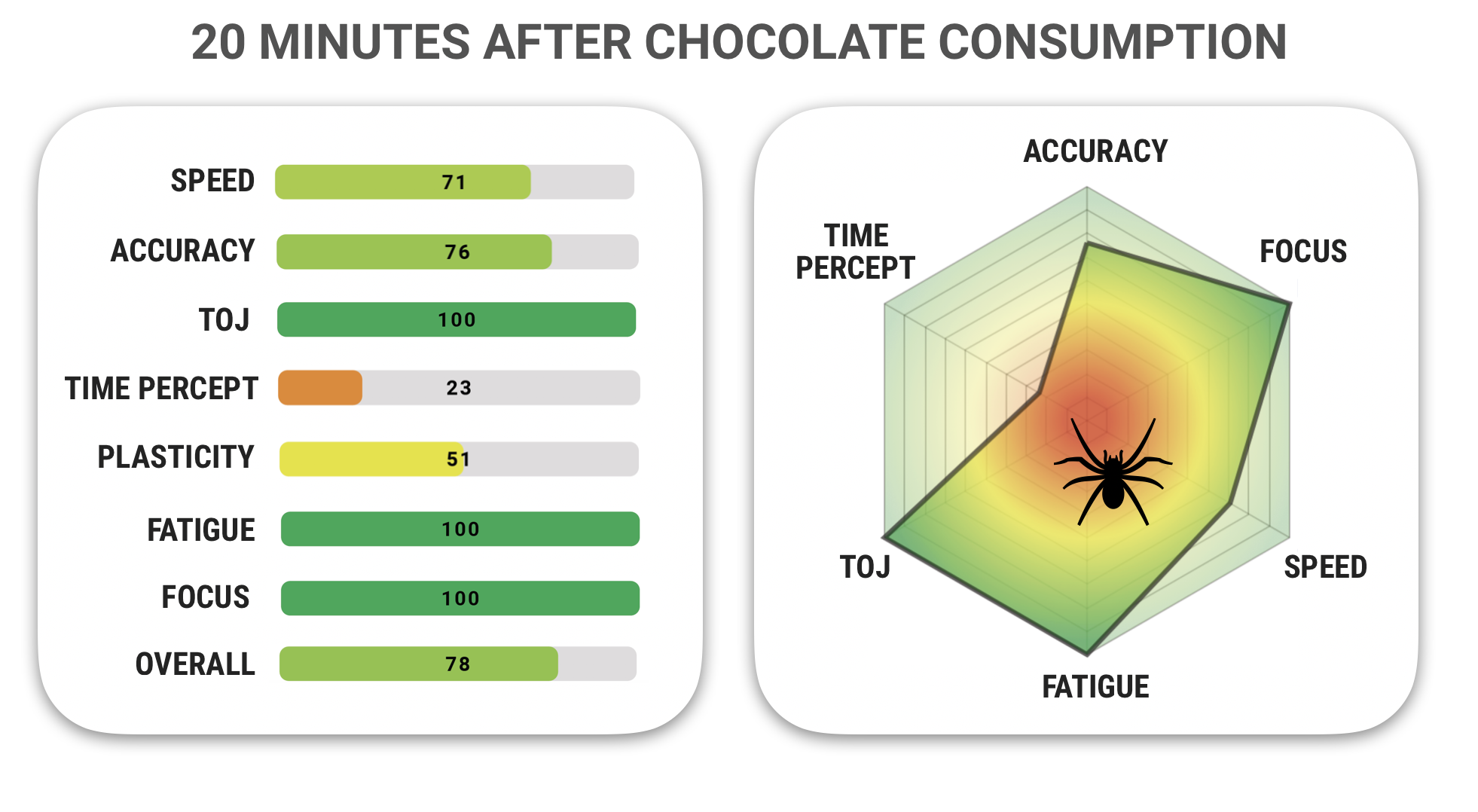 Nearly all of his metrics from the second test showed significant improvements in brain function, particularly the Temporal Order Judgement (TOJ) and Speed scores. Speed scores have been shown to improve after acute doses of caffeine, which is present in chocolate at levels that are safe for children. Increases in TOJ scores suggest better behavioral control, which can reflect flavonoid-induced improvements in mood.

Finally, and subjectively, the boy seemed much happier after his snack.

Many people are surprised by the cognitive effects of chocolate. You can use Brain Gauge to discover other unlikely foods and supplements that can improve your brain health. Subscribe to better brain health today, before that Halloween candy is all gone!