In a previous report, we discussed how an illusory conditioning stimulus could be context dependent and that frequently delivering repetitive stimuli has the effect of suppressing the percept of a stimulus. Repeat a stimulus many times (the conditioning stimuli that are delivered by the Brain Gauge are typically sinusoidal at a frequency that delivers many repeats to the same place on the finger tip) and the effect is that stimuli feel much smaller. Are there other illusions? The obvious answer is yes, since we’re writing this report. The illusion in the figure below appears to have multiple triangles drawn. However, if you inspect it carefully, there are actually no triangles in the image. This is a good example of the brain literally “connecting the dots” in order to make a coherent pattern that makes sense. This is a property of the neural network – cortical assemblies coordinate their activity and optimize connections so that we can navigate the environment in the most efficient manner. Computational neural networks have been built to detect sparse information embedded in very noisy fields using some of the principles that have been learned from evaluating the brain’s neural network (but this will be the subject of another report). 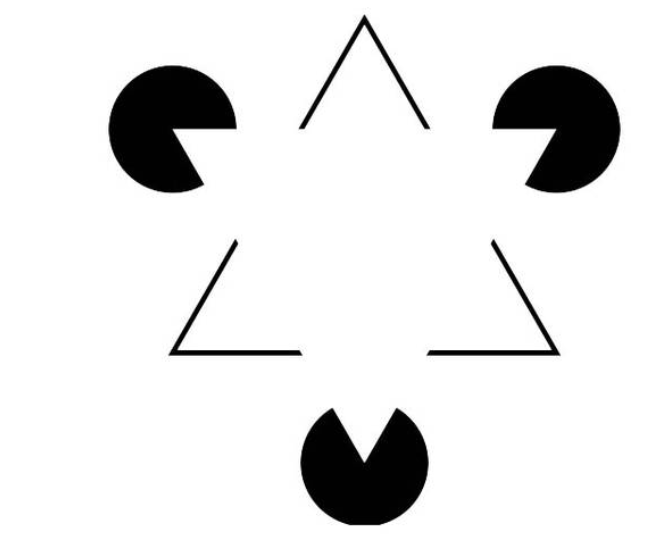 So how could we evaluate an illusion that connects the dots with a well-controlled tactile stimulus, such as the Brain Gauge is capable of delivering? Perhaps the best way to explain this is to go through the logic that I went through when designing the original experiment.

First, the fingers have independent sensation. You can tell when one finger is tapped and identify it from its neighbor. Tap two fingers, one after the other, and you can reliably tell which finger was tapped first, as long as there is a sufficient separation in the timing of the taps. But what happens when you use your fingers together? Anytime you grab and object, you don’t consciously think about coordinating the movements of the fingers – it is done automatically. In similar fashion, when we observed responses to repetitive sinusoidal stimuli (this was a couple of decades ago) in the brain, we discovered that groups or assemblies of cortical neurons would start working together and synchronize (or coordinate) their response activity. Stimulate two places on the skin together (or two fingers at the same time) and within about 130 milliseconds, activity of the two cortical regions that are associated with those two fingers becomes unified. That coordinated activity (that only occurs under normal healthy conditions) would predict that if we delivered conditioning stimuli that are identical (i.e., two repetitive sinusoids to two fingertips) then it would make the two fingers perceive a unified or coordinated response. This is how we set up the connectivity test the first time that we did it – we delivered two identical conditioning stimuli (which we now call illusory conditioning) to two fingers and then performed the temporal order judgement (TOJ) task. TOJ is the test where you are queried as to which of two taps came first. The timing between taps is varied and you get a score that reflects the shortest interval that you were able to reliably perceive the order of the taps. Comparison of the TOJc (TOJ with conditioning stimulation) and TOJ showed that TOJc was significantly more difficult (i.e., got a worse score) than TOJ.

You might think that a robust finding like that would be easy to publish and for reviewers to accept, but we knew that would not be the case. So we went ahead and did a couple of other experimental conditions that demonstrated that this phenomenon of TOJc >> TOJ only occurred with conditioning stimuli that were identical (synchronized and periodic). Randomly delivered (aperiodic) stimuli of even greater magnitude did not have any impact and resulted in TOJc = TOJ. Delivery of TOJ and TOJc to fingers on opposite hands resulted in TOJc=TOJ, so that demonstrated that the cortical regions needed to be in close proximity (we later did experiments to demonstrate that cortical distance between finger representations could be correlated to the impact that conditioning has on TOJc). This idea was still met with a bit of resistance with a grumpy reviewer (the idea ran counter to some long-held beliefs about how the cortex was organized), but the editor thought it was pretty compelling evidence and published it anyway. We subsequently did other experiments that demonstrated the underlying neurophysiological evidence as well as published findings that demonstrated that in populations that have disrupted cortical connectivity, TOJc==TOJ. These populations, in general, have lower than normal global functional connectivity which is a measure obtained with fMRI (fMRI does not have the capability to examine local functional connectivity, which is what the Brain Gauge does with TOJc/TOJ comparison). We believe that global functional connectivity is dependent on local functional connectivity (a belief widely held by many other researchers but still debated). 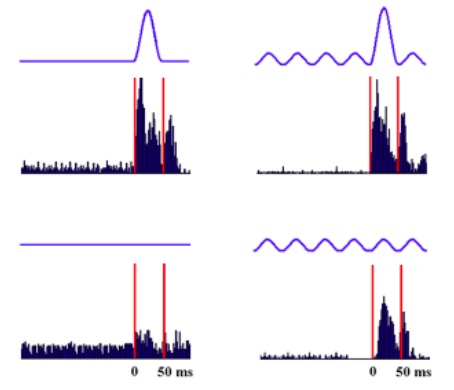 What happens when 2 finger tips are conditioned and a tap is delivered to one of them? The figure above shows the neurophysiological response to finger tips receiving a tap in the absence (2 left panels) and presence (2 right panels) of conditioning stimuli. The top left panel shows a signficant cortical response to a tap on one finger (D2) while the bottom left panel shows very little response at the adjacent finger (D3) cortical site. However, with a conditioning stimulus delivered to both fingers (right hand panels) both places in the brain that correspond to the adjacent finger tips respond to the single tap, and this demonstrates the coordinated response of the cortex to the simple tap.

Let’s demonstrate changing the connectivity score with a published intervention on human subjects. Aimee Nelson and colleagues did an elegant experiment demonstrating that disruption of cortical circuitry resulted in the TOJc score actually improving. Subjects took the TOJc test (all had scores that reflected TOJc>>TOJ) before getting a dose of theta-burst TMS over the somatosensory cortex, and then tested until the effects of the TMS wore off. While the TMS burst was effective, TOJc was approximately equal to TOJ (unless they received sham TMS, which was ineffective at changing it). That study demonstrated the sensitivity of the metric.

The TOJ connectivity score is currently only recommended with the Brain Gauge Pro because the sensors in the Pro model provide feedback to the user that they are pressing the probe tips down too hard (this happens with about 10% of all users). If the probe tips are actively pressed down, then there is no guarantee that the two conditioning stimuli will be equal and the result will be an inaccurate connectivity score.

Scientific publications are available for further reading on the following topics: