Brain Gauge methods are sensitive enough to detect changes in plasticity with a small dose of cough syrup.
Ever take cough syrup and feel a bit strange? And then maybe wonder how it was impacting your brain? It probably did a good job suppressing your cough, but some medications do change the way you think.

At the time, we had spent considerable effort examining the role of NMDA receptors in information processing and had come to the conclusion that they play a very important role in processing sensory inputs. They also play a very important role in higher cognitive processing, but it is easier to study the impact that they have on basic circuitry than it is to acquire measures of cognition and extrapolate the mechanism.

An important role of the NMDA receptor is that it helps improve contrast of a signal, and in particular the adaptive response, that is presented to the cortex. Because it is voltage gated, its activity becomes much more pronounced with repeated stimuli that it adapts to.

In the study, subjects were tested before they ingested either 60 mg DXM (a double dose of cough syrup) or a placebo that looked identical to the drug. In the figure below, note that at T0 the data for controls and DXM subjects were close to identical (T0 is before drug ingestion). One hour after drug ingestion (T1), there is a slight difference on the amplitude discrimination score (this translates to “accuracy” on Brain Gauge scores) between the two groups but a significant difference on the post-conditioning scores (translates to “plasticity” on Brain Gauge scores). In the graphs below, lower numbers indicate better performance for Block 1 trials but higher numbers indicate worse scores on Block 2 trials. A relatively small dose of DXM caused subjects to not respond to a conditioning stimulus (in this experiment, the conditioning stimulus was designed to make task performance worse in healthy controls). 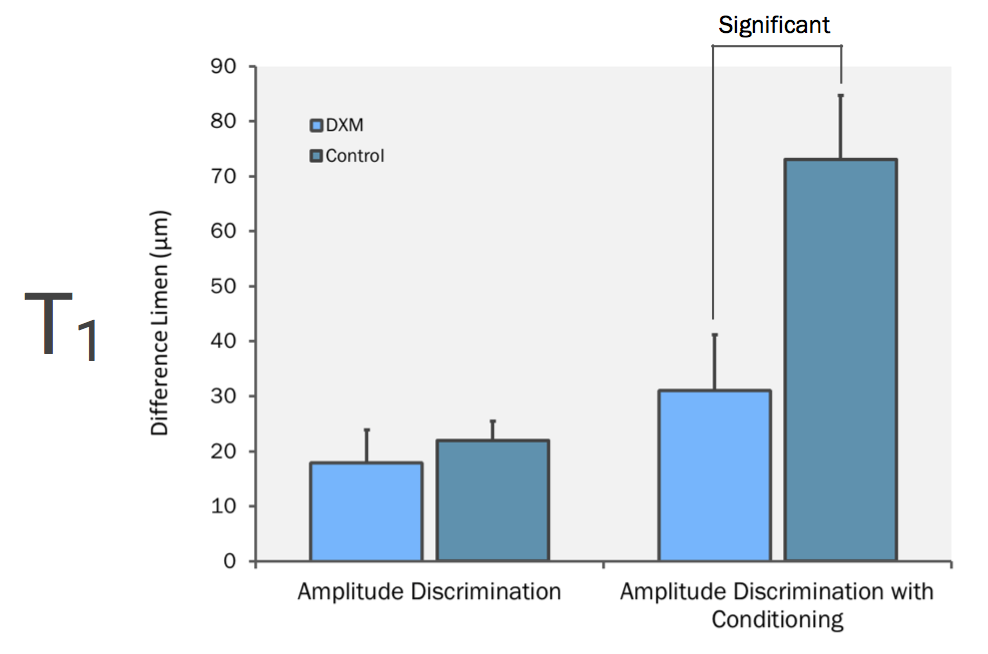 The take away message from this study is that this type of testing is far more sensitive to pharmacological insult than many modern medical imaging methods (in many cases, much more powerful sedatives are given to patients to calm them enough to lie still in a scanner). And if you think about it, you might want to see how medications impact your Brain Gauge scores, particularly if you take them for an extended period of time (but that is the topic of another blog).

One additional note on this study – we get a lot of people asking about reliability of the Brain Gauge measures. Notice that the control data in the graph was collected across 3 time points: before, 1 hour after and 2 hours after drug or placebo ingestion. The data for the controls was stable and did not change although the data for the group that ingested the drug did change. Obviously, there was not a significant effect of taking the test several times. This is one of several publications in which a treatment or test was administered to both a test group versus a control group, and future reports will describe the significance of those studies.

The obvious downside of a very sensitive test is that it is, in fact, sensitive to alterations in brain function. Testing yourself frequently is a bit like weighing yourself multiple times in one day – your scores will change depending on temporary conditions. There are many measures that rarely demonstrate a change but are regarded as reliable for that very reason (for example, CT scans never show a change with concussion – only with moderate TBI). It’s really up to the individual to determine what level of sensitivity that they want to focus on.