More evidence that we are what we eat

A recent study out of Ohio State University has found what holistic health practitioners—and really, most people—have known for a long time: what we eat can have an immediate impact on our brain function.

Before and 5 hours after each meal, participants were given a computerized visual reaction time test to assess cognitive function and concentration. Results were calculated as CPT (Continuous Performance Test), which takes into account reaction time, variability and errors and is reported on a scale from 0-100, with higher scores indicating poorer performance. Difference in post-meal testing can be seen below: 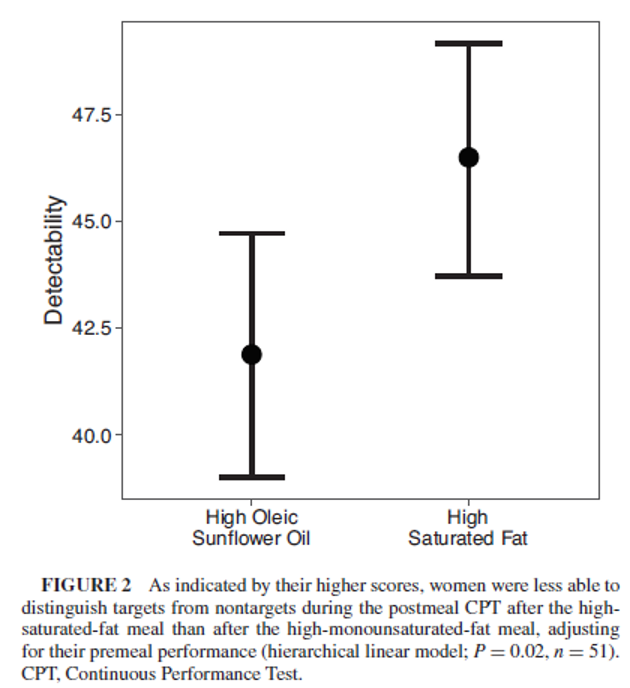 Overall, participants scored slightly worse following the saturated fat meal compared to the unsaturated fat meal. However, there are two important things to note: 1) both groups performed better than a general average score of 50, and 2) there is overlap in error bars on the graph above, indicating that some caution should be taken when interpreting the data. That being said, there is definitely an interesting trend that could be further studied.

Another thing to note about the study, and really any nutrition-based study, is that it is based on a population average response and does not necessarily reflect how each individual responded, or how each individual in the general population would respond to each of these meals. It also doesn’t follow up to show how long the cognitive effects of the meal last, or if the effects of consuming saturated fats change if vegetables are consumed as part of the meal (as they always should be!).

Good thing there’s a way to see your brain’s individual response to what goes in your mouth! The study described above could be re-created in your own kitchen to determine how your brain reacts to saturated fats (or any foods, really). By using your Brain Gauge and looking at the Reaction Time Variability score (or simply the “Focus” score), you can get essentially the same quantitative measurement used in this study. You could also continue testing past the 5 hour mark used in the study to see how long the effects last, or if consumption of other foods (like vegetables, which were not present in the study meal) mitigates the negative effects that the study suggests comes from a high saturated fat meal. There are lots of variables to explore and you can tailor your study to how you normally eat to determine if that is optimal for your personal brain health.

Interestingly, the study also analyzed the effect of the two meals on people with a leaky gut—as measured by a positive test for the presence of endotoxemia markers in their blood. In those that had this marker, performance on the concentration test were below normal regardless of the type of fat in the meal they had just consumed. In the context of your own personal testing, this means that low Focus scores could (but don’t necessarily) suggest a leaky gut. It also means that if you already suspect that you have a leaky gut and are taking steps to resolve that issue, your Brain Gauge could be a good tool to help monitor your progress and keep you on track towards your health goals!