As we’ve noted in previous posts, maintaining or returning to a healthy cognitive state takes a system-level approach and cannot be boiled down to a single silver bullet. However, there are several individual pieces that can have significant effects.

According to a recently published article in the Journal of Alzheimer’s Disease, it appears that adding mushrooms to your diet can have a significant effect on maintaining a healthy brain into old age. A Singapore-based research team investigated this topic in 663 adults above the age of 60 living in Singapore between 2011 and 2017. Participants were questioned about their frequency of mushroom consumption, with a serving size defined as ¾ cups of cooked mushrooms. Subjects were also given the Singapore modified Mini-Mental State Examination (SM-MMSE) to diagnose mild cognitive impairment (MCI). The authors concluded that people who ate more than two servings of mushrooms per week were 57% less likely to be diagnosed with MCI compared to those who did not consume any mushrooms. The protective effects of mushrooms also appeared to be dose-dependent—the more mushrooms a person ate on average/week, the less likely they were to have a diagnosis of MCI.

Given that this is simply an observational study where study participants self-report data, there is lots of room for confounding factors. However, the authors took note of this, and even accounting for education, smoking status, alcohol consumption, physical activity, social involvement, hypertension, diabetes, heart diseases, and stroke in their model, they still found a significant association between mushroom consumption and normal cognitive function.

While the exact mechanism of protection is not known, the authors hypothesize that some of the unique compounds found in mushrooms have effects that range from antioxidants/anti-inflammatories, promoting the synthesis of nerves, and having neuroprotective effects. One such compound, ergothioneine, is known to be an antioxidant and have cytoprotective effects and it was found in significantly higher levels in the blood of study participants without MCI compared to those with MCI.

A similar observational study was conducted in Japan with similar results—overall, there was a negative correlation between the frequency of mushroom consumption and likelihood of developing dementia/MCI. Interestingly, the authors here found a gender effect—there appeared to be more of a protective effect of mushrooms on women than on men. However, the authors note that this finding could have been due to study design, so guys, that’s no reason not to increase your mushroom consumption! Another significant correlation noted by the authors was that people who ate more mushrooms also had healthier lifestyles (spent more time walking, ate more vegetables and fish, didn’t smoke, lower rate of psychological issues). It’s unlikely that eating mushrooms makes you walk more, but it is possible that walking more helps reduce your chance of dementia, and it’s known that eating more vegetables is correlated with reduced chance of dementia. Point being that lifestyle/environmental factors are difficult to tease apart, and while a large study such as this one may find interesting correlations, it’s really up to you to figure out which combinations of factors work best for your unique situation.

While correlational studies can give a good jumping off point for factors to look into, a placebo-controlled double-blind study is generally regarded as the golden standard for determining cause and effect relationships. On the topic of mushrooms and cognitive function, we found one such study in the literature. Another Japanese research group showed that adding Yamabushitake mushroom (Lion’s Mane) in pill form to the diet of people who had already been diagnosed with MCI significantly improved cognitive function after 8 weeks of use, with additional benefits continuing for up to 16 weeks when the trial ended. Interestingly, these effects were reversed when tested again 4 weeks after eliminating the mushroom pills from their diet (see graph below). Thus, it appears that in order to gain maximum benefits from mushrooms, they need to be consumed regularly and integrated into one’s normal eating habits. 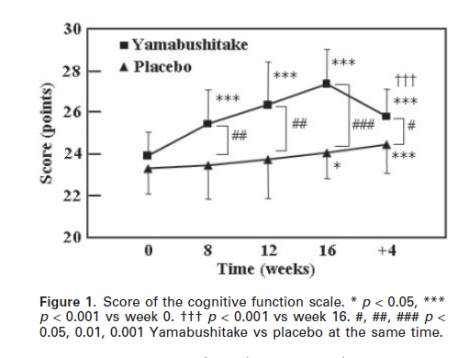 Once again, the main take-away here should be that mushrooms may hold a powerful potential to help reduce the chances of developing dementia, or even to reverse the process once it’s started (or as Dr. Bredesen would say, they could be one patch in a roof full of holes). No one has the exact same history, lifestyle, and environmental exposures that you have, and given that all of these factors likely interact in synergistic ways, even placebo-controlled studies can’t tell you exactly how you will respond or which variety of mushroom is optimal for you. It can give you a good starting point and incentive for experimentation, but as usual with treatments that have very low risk involved, we encourage you to use your Brain Gauge to find what combination works best for you!