It’s not uncommon for us to hear in the news about the negative effects that obesity can have on the peripheral parts of our body—things like diabetes, heart disease, asthma, high blood pressure, and some cancers are all linked to being overweight or obese. But did you know that it can have effects on your mental health as well? 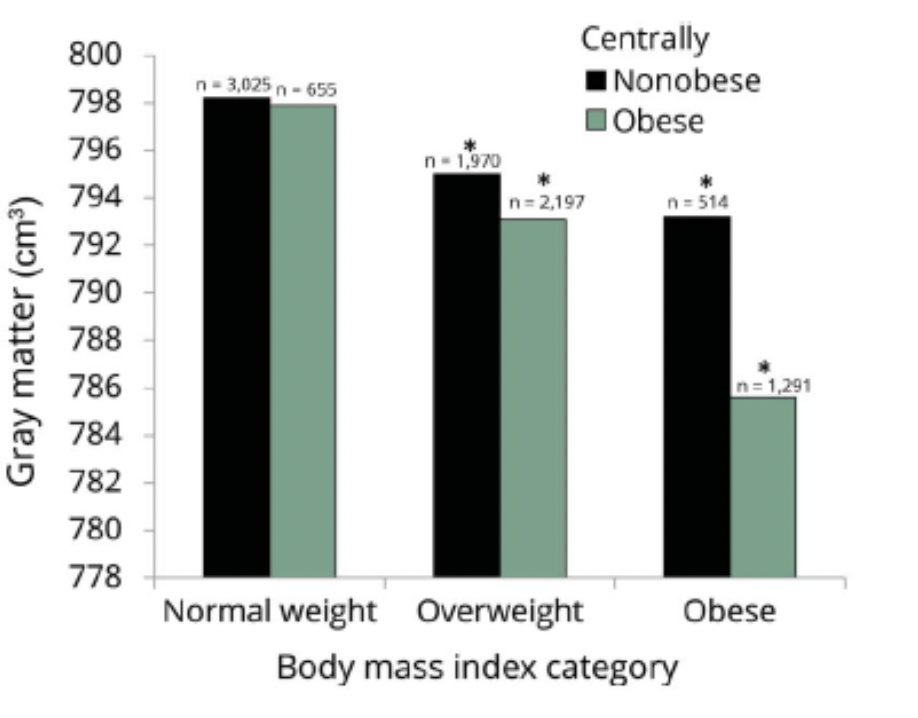 The authors also looked at the association between obesity measures and age, as shown below. As people aged, there was a significant decrease in gray matter volume regardless of BMI, but even within each age group, a higher BMI was associated with lower gray matter volume. Thus, when you have a higher BMI, you are essentially adding years onto the age of your brain. 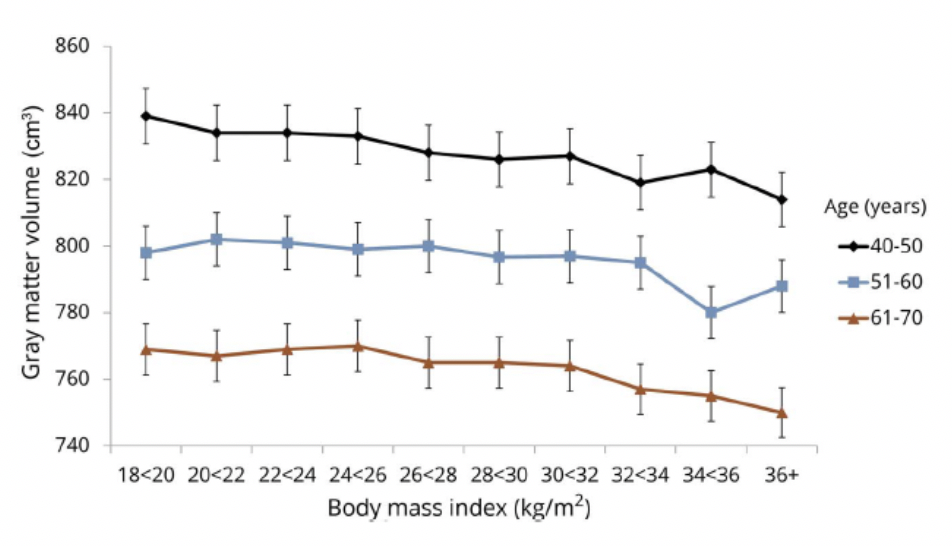 It is important to note that both of these studies are correlational studies, not causation. Thus, we cannot conclusively say that obesity causes you to lose gray matter volume. It could be the other way around. Or it could some other associated factor that is the culprit. It’s not really plausible to set up a causation study where you take normal weight people, randomly assign them to groups to either become obese or stay normal weight, and then see if gray matter volume changes as a result, so we’ll have to stick with the data that we have to make conclusions. Given that there are so many other health risks associated with being overweight or obese, the studies described here should just add some extra motivation to get you moving more and eating right if you fall into one of those categories.

Another limitation with the study is that it provides no clues as to if the loss of gray matter volume is reversible—assuming that obesity does cause your brain to shrink, does losing weight and getting healthy reverse the damage done to your brain? We don’t have an answer to that, but it would be an interesting study to do with your Brain Gauge! Maybe you need a little more motivation than just the number on your bathroom scale—you could use your Brain Gauge to track trends in your brain health as you shed pounds. As we’ve noted in other blogs, there is strong evidence that improving your diet and exercise habits do have positive impacts on your brain health, so it is a safe bet that you’ll see improvements in brain health as your body health improves. The correlations and associations between body fat, brain health, exercise, diet, and a number of other related factors may be complex, but the great thing is that understanding exactly what’s causing what doesn’t really matter when there is so much to gain and only fat to lose!