Use of the Brain Gauge with the knowledge of a tuning curve will help you optimize brain performance.
Whether it's at work or on the field, humans are constantly looking for ways to get better. But our bodies, just like any machine, needed to be tuned in very specific ways in order to for us to achieve optimal performance. For example, if you want to run a fast marathon, you'll need to put in a lot of long runs and a lot of calories in the months leading up to the event. As you approach race day, you'll want to be well rested, fed, and hydrated. Runners even call their last runs before a big race "tune-up" workouts. Without adequate preparation, you'll never be able to achieve your true athletic potential.

However, training for a marathon is nothing like training for a shorter race - such as, say, the 100 meter dash. Though both events involve running, they tax the body in very different ways. Usain Bolt once claimed he had never run more than a mile, but clearly his lack of aerobic fitness hasn't held him back in shorter races.

These lessons from athletic training can also be applied to mental performance. In order to optimize your brain function for a specific task, you need to train it and tune it in a specific way.

But with so many biohacks and nootropics out there, each causing subtle and often imperceptible changes, how do you know when your brain is optimally tuned?

As it turns out, scientists have discovered that the brain can be tuned for performance by subjecting it to a few very specific conditions. We can identify when your brain is performing at its best under each condition by using a tuning curve. The figure below is a good example of a tuning curve which plots reaction time versus arousal (figure modified from Kosinski, 2018). The plot shows that reaction time tends to be very poor (remember high/slow reaction times are worse than low/fast reaction times) when you are in a low state of arousal. For example, your reaction time first thing in the morning (low arousal) will be much slower than later on in the day, or after a few cups of coffee (high arousal). However, high doses of caffeine, which can induce hyperarousal, may cause your reaction time to get worse. 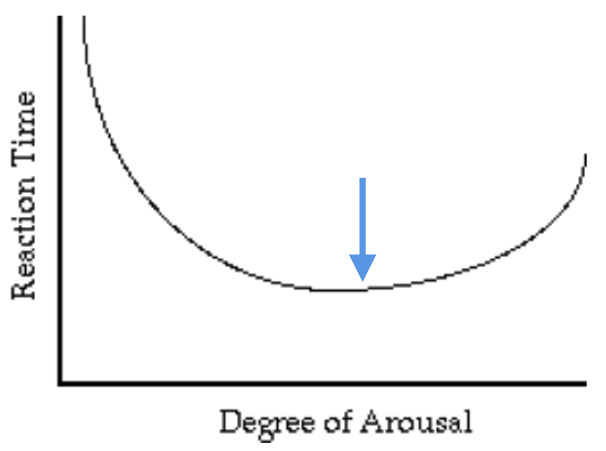 In order to tune your brain for optimal performance with caffeine or other nootropics, it's important to find the right balance between too much and too little. One of the most commonly used nootropics that is Ritalin, a drug used to treat ADHD (attention deficit hyper-activity disorder). While it has been demonstrated that low doses of Ritalin can be beneficial, high doses (and sometimes chronic use) can be detrimental to cognitive function. As with caffeine, there appears to be a tuning curve associated with the amount and duration of taking this drug.

The best way to monitor the efficacy of caffeine, Ritalin, and other nootropics is through quantitative cognitive assessment tool, such as our very own Brain Gauge. Sometimes too much of a good thing can lead to negative consequences, and in order to optimize your brain performance you need to identify and track your personal tuning curves. You can use a Brain Gauge to find out what keeps your brain properly tuned, and to figure out the best ways to optimize your life.