Traumatic Brain Injury (TBI) has been featured prominently in the news for the past few years. Public awareness of brain injuries has led to a growing number of people asking us about treatments for TBI, and in particular, mTBI. For those of you unfamiliar with the nomenclature, mTBI stands for “mild” TBI and this is often used synonymously with concussion. Moderate and severe TBI are much worse conditions of brain trauma, and the dividing line between mild and moderate is (usually) how long someone was in a coma post-traumatic injury and/or whether or not anything could be seen on an imaging scan (if nothing shows up with imaging, then it is defined as mild). The second piece of commonly used nomenclature that you need to be informed of is the difference between acute and chronic mTBI. Acute mTBI is what most people are familiar with – this is what usually happens when someone bangs their head and, particularly if they are in some type of sports organization, they are forced to go through a 7 to 21 day recovery period before they can return to play. A significant per cent of people that get acute concussion end up becoming chronic. That is, their symptoms do not resolve (i.e., they don’t get better or they get better at a lot slower trajectory than most) and they actually end up with chronic mTBI. This condition can last months or even years. For example, take a look at the post where we wrote about the concussed individuals 16 months post-concussion here.

While we do not recommend any particular treatment, nor do we claim to know what the best protocol is for recovery, we have worked with many clinicians and clinical researchers who are either investigating new ways to treat mTBI or have found significant success with a particular method for mTBI treatment. Samples of a couple of these can be found here and here.

The bottom line on acute versus chronic mTBI is that recovery from acute concussion typically looks something like the data presented below. Note that the individual’s scores get better from Day 1 to Day 14.

The individual with chronic mTBI does not get better for a long period of time (if ever), and some of these individuals will seek help from a clinician. The scores below show the progress of patients that presented with chronic mTBI before and after some form of treatment. The data was obtained from 4 different patients treated by 4 different clinicians, and they all show positive outcomes in their Brain Gauge scores, which parallels the qualitive patient reports that their symptoms were reduced or eliminated. 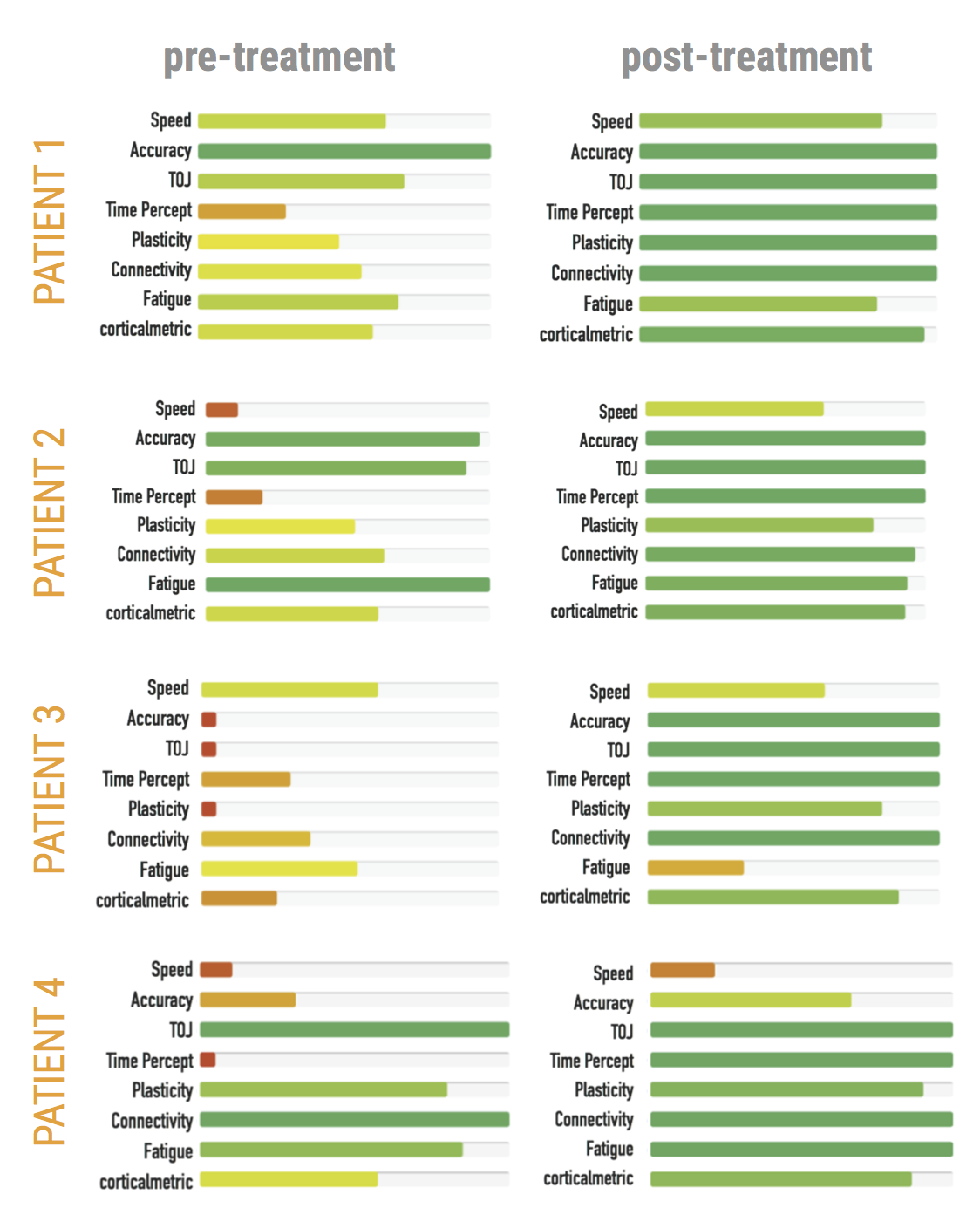 What is noteworthy about the data from those 4 patients is that even though all were treated differently by 4 different clinicians, there was one common element in those treatments. In each case, the patient had some form of PEMF treatment administered to them. This is what is called anecdotal data – but it was an important enough observation that led us to follow it up with a pilot study to observe the impact of PEMF treatment on TBI. So we followed this up with a study that was a bit more controlled. In order to determine if PEMF treatment was effective, patients with chronic TBI were recruited and tested before any treatment was administered. Brain Gauge assessments were made throughout the course of the treatment and some of the results are below. 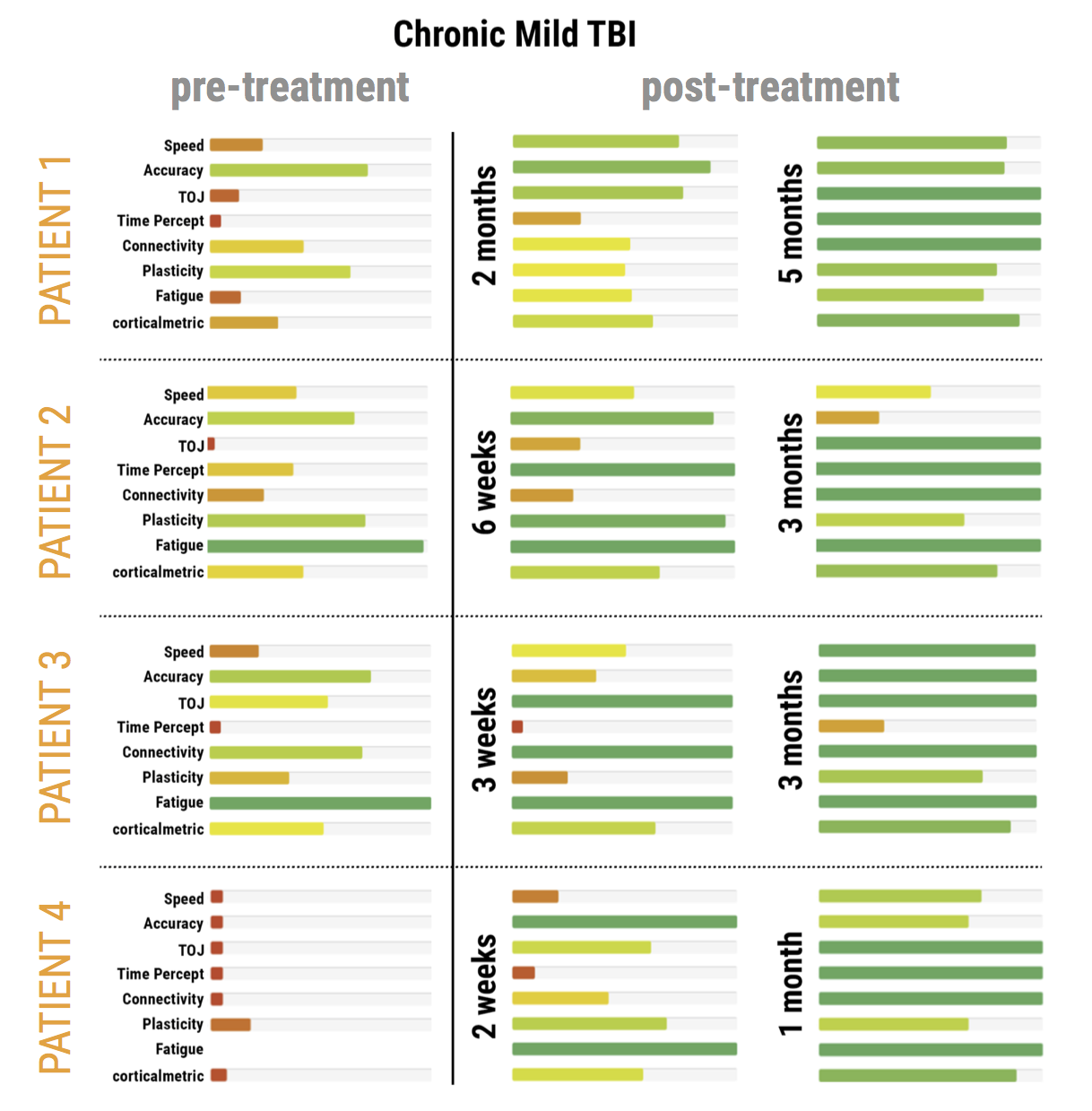 Note that these were patients with chronic mTBI – their symptoms had persisted for months, and for many cases, years. Based on both their Brain Gauge scores and other outcome measures, all improved with treatment, even though they did not all improve at the same rate. This is not surprising since it is difficult (if not impossible) to identically match all individuals recruited into a study.
If you look carefully at the results, you will notice that some measures appear to improve before other measures. This is because the coil position was changed. For example, note that on the middle column, the indication for Timing Perception lags many of the other measures. Later in the treatment progression, the coil position was shifted from one orientation (coils on left and right side of head) to a rostral-to-caudal orientation (coils on front and back of head). The back of the head coil was positioned over the cerebellum, which plays an important role in timing perception, and after the coil was placed there, the timing perception metric noticeably improved. Thus, treatments in the study were guided by the data from the Brain Gauge, and this led to a much better outcome than if the coils had not been re-positioned.

The full results of the study can be read here.

Information about the PEMF systems used in the study can be found here.