A car can be a very useful tool to get you from Point A to Point B, but if you don’t know how to drive a car, it doesn’t do you much good. Even the most powerful tool isn’t very useful if you don’t know how to use it. Since there’s not a comparable technology to the Brain Gauge on the market today, we understand when people aren’t sure of the best methods for using a Brain Gauge to track their brain health. That’s why one of the goals of this blog is to guide people in using their Brain Gauge for practical applications so that you can take control of and become an expert on your own brain health and take steps to remain mentally fit even into old age.

A recent publication in Neuropsychopharmacology provides a good example of a situation in which a Brain Gauge could be used to help prevent the development of severe cognitive disorders. Curtin et al. (2018) found a strong link between Attention-Deficit/Hyperactivity Disorder (ADHD) and the development of Parkinson’s Disease (PD) or other basal ganglia and cerebellum (BG&C) disorders (such as secondary parkinsonism and essential tremor), with an even higher risk associated with those who take dopaminergic stimulant pharmaceuticals such as amphetamine (AMPH) and methylphenidate (METH).

The same trend is also true with early onset BG&C disorders (diagnosis before age 50). People diagnosed with ADHD had a staggering 2.4-fold increased risk of developing a BG&C disorder (including PD) before age 50, but even more disturbingly, if those ADHD patients also took prescribed AMPH and/or METH, they had an 8.6-fold increased risk of early onset BG&C disorders! These data can be visualized in the graph below from Curtin et al. (2018): 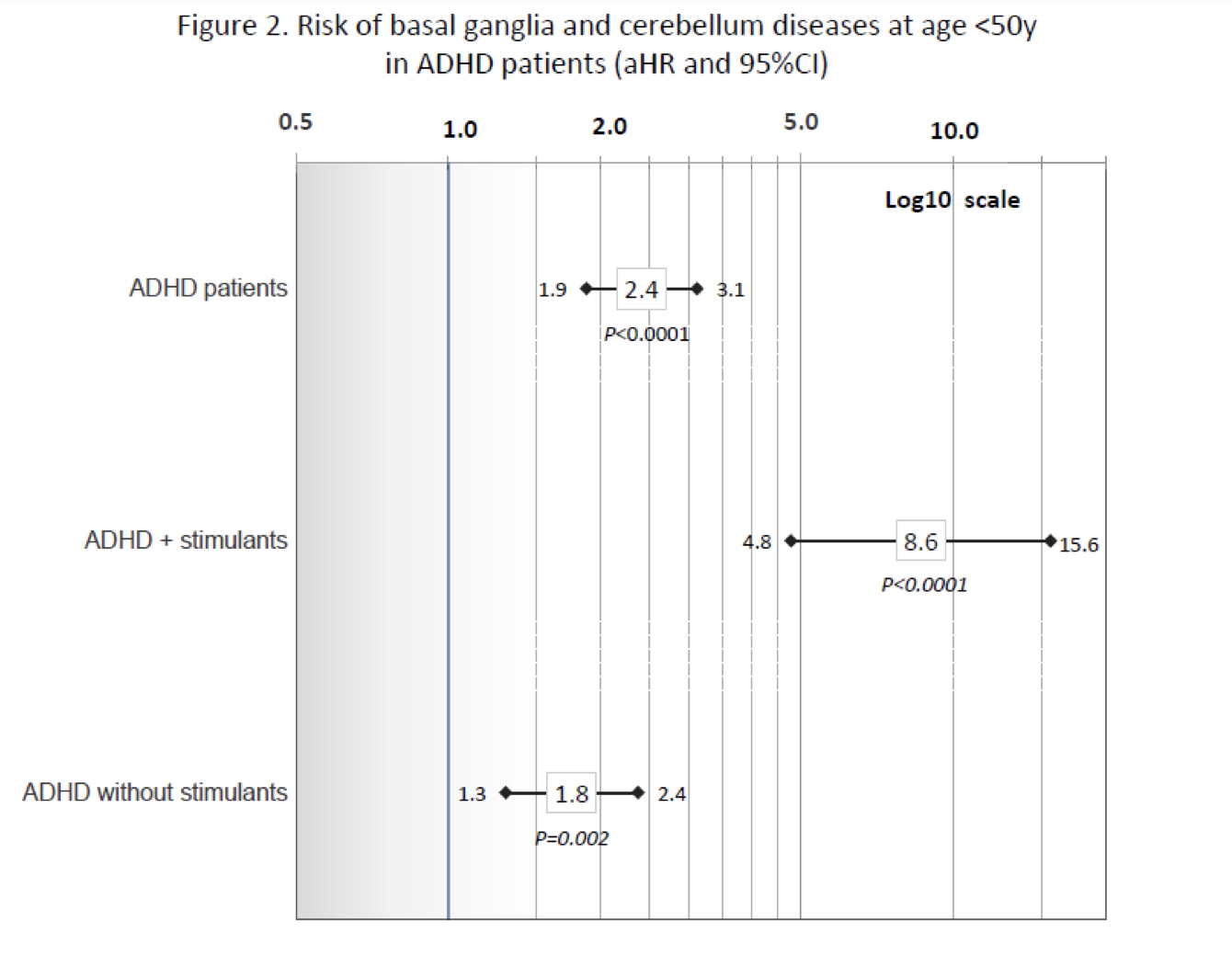 Curtin et al. (2018) Figure 2. Risk of earlier-onset basal ganglia and cerebellum diseases (diagnosis age of 21-49y) in ADHD patients vs. non-ADHD subjects overall and for: ADHD plus (+) stimulants; and, ADHD without known stimulants. Adjusted hazard ratios and 95% confidence intervals (controlling for sex, age, race/ethnicity, psychotic conditions, tobacco use, and an interaction of psychotic conditions and ADHD) are shown on a log10 scale. Corrected P values are presented (significance level ≤0.005). 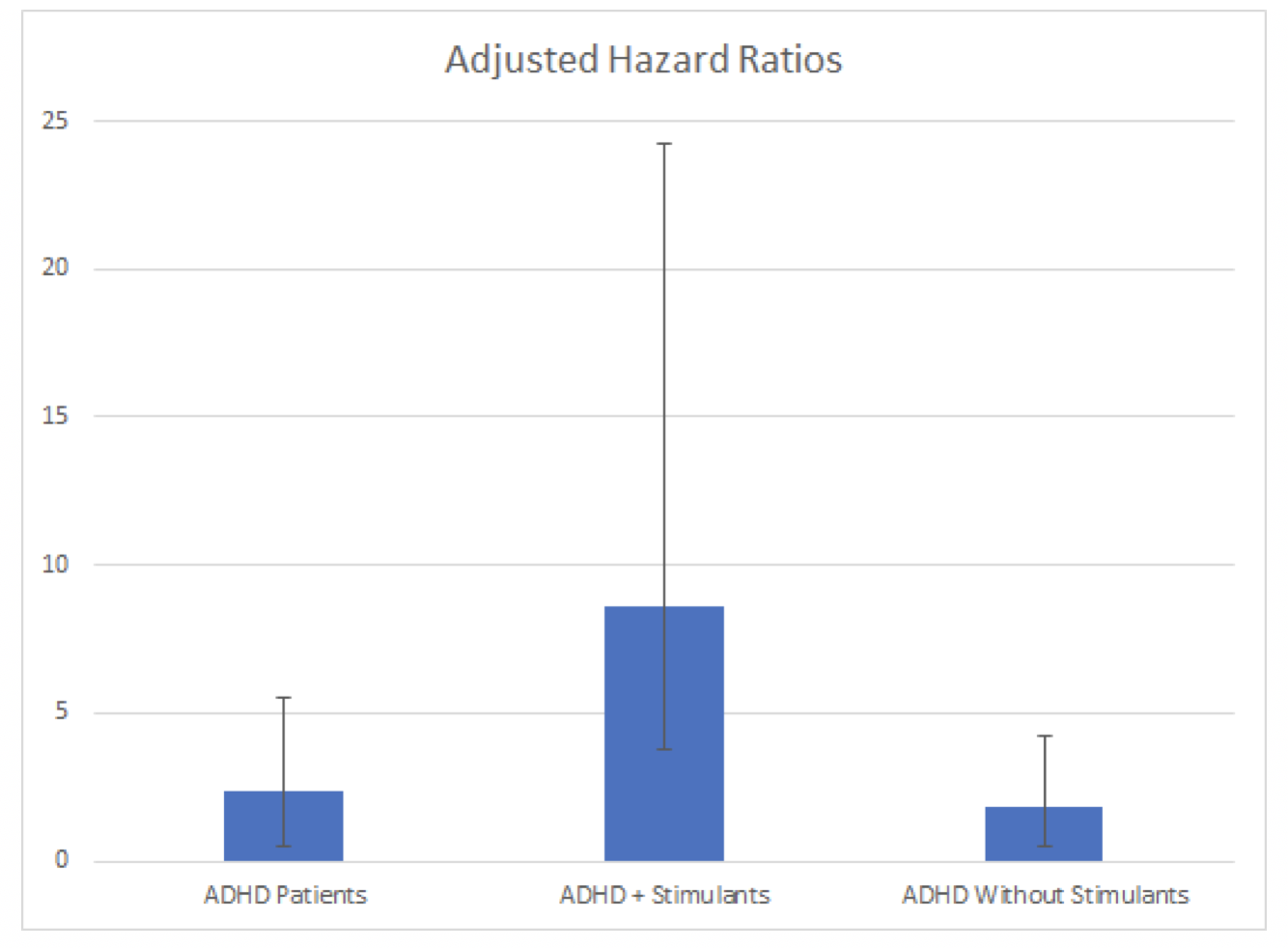 The authors are careful to note that this is only an observational study, so the use of AMPH/METH and the development of PD may or may not be causative—it is possible that people with more severe cases of ADHD are more likely to treat symptoms with drugs, and it is the severity of ADHD, not the drugs themselves, that make one more likely to develop PD or related diseases. They also note that there is no known genetic link between ADHD and PD/BG&C diseases, so the increased risk shown above likely has some level of environmental influence—be that from prescribed drugs or other factors like environmental toxins or lifestyle choices that influence the development of both disorders.

Regardless, the results of the study indicate that close monitoring of ADHD patients should occur, particularly when the patient is taking drugs to control symptoms. This is especially important given that the average time to diagnosis of BG&C disease after ADHD diagnosis in the above study was only 6.6 years!

Diagnosis of PD and similar diseases are based on functional changes—things like development of a tremor, slowed movement, and altered speech—and once these functional changes are apparent, your brain has already undergone significant changes. Progressive degenerative diseases do not occur overnight, but rather changes in your brain happen slowly over time until they become significant enough to manifest as physical symptoms. It is likely that neurophysiological changes begin years (maybe even up to a decade) before a clinical diagnosis can currently be made. Our friends at Cognitune came up with a list of 12 alternatives to Adderall (a commonly prescribed ADHD medication), and with the help of Brain Gauge, you might be able to test out some of these substitutions and see how they affect your brain!

For a more in-depth look at changes in Brain Gauge scores due to ADHD and Parkinson’s Disease, check out these peer-reviewed publications: