Although it is has been considered difficult to treat (and sometimes diagnose), it appears that one underlying symptom in PTSD is neuroinflammation.

It is estimated that approximately 8% of Americans will develop Post Traumatic Stress Disorder (PTSD) at some point in their life, but nearly 70% of the same population will experience a traumatic situation. So why do some people develop PTSD while others do not? As is the case with TBI/concussion, ethics prevents controlled studies of the development of PTSD, but there are other ways to tease apart what might be going on.

Two recent reviews (Speer et al. 2018 and Michopoulos et al. 2017) explored the connection between systemic inflammation and the development of PTSD, showing strong evidence linking the two. While there are some inconsistencies in the literature on the subject, there is still a strong case to be made for a likely link to systemic, low-grade inflammation. As addressed in the table below from Michopoulos et al. 2017, numerous studies have found an association between the presence of pro-inflammatory markers and PTSD, but other studies have found either the opposite or no correlation, indicating that it’s not a simple, straightforward answer. Furthermore, while correlation was upheld with 4 of 6 markers in a meta-analysis by Passos et al. (2015), correlation does not always mean causation--perhaps chronic PTSD led to the development of an inflammatory response due to factors such as medications, alcohol use, poor diet, lack of exercise, or poor sleep patterns, or inflammation directly caused by the trauma led to the development of PTSD, or inflammation present prior to the trauma set the stage for PTSD to develop post trauma, or perhaps any combination of those. 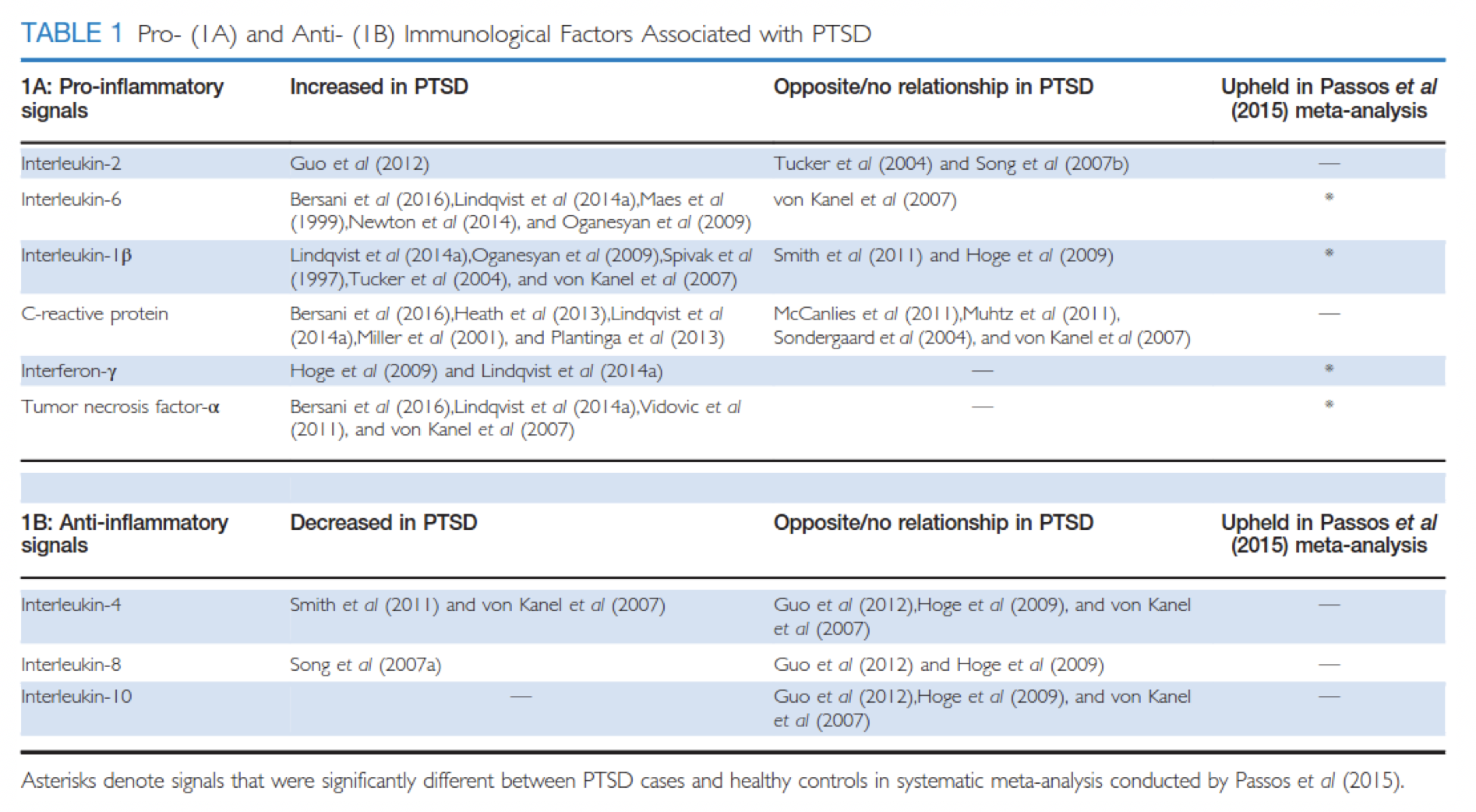 Speer et al. (2018) lays out the connection between PTSD and chronic disease such as diabetes, cardiovascular disease, and autoimmune diseases, which are also correlated with chronic inflammation. Those with PTSD are, in fact, at greater risk for developing such chronic diseases than the general population (Britvić et al. 2015). Other comorbidities include major depression, substance/alcohol abuse, Parkinson’s Disease, and suicide, which can also be downstream effects of chronic inflammation. So regardless of where the inflammation is coming from, it’s important to understand the further risks associated with it, as well as the importance of working to reverse the imbalances leading to chronic inflammation.

Modern, conventional medicine likes to find one-to-one cause and effect links to explain diseases and disorders, but sometimes reality is more complicated. Preexisting inflammation and trauma-induced inflammation could both be the culprit in turning on the switch to PTSD. Regardless, the treatment would be the same—namely lifestyle changes to help reduce systemic inflammation. Things like exercise, healthy diet, protecting sleep, reducing stress, and avoiding inflammatory substances like alcohol and drugs are all great ways to reduce inflammation. Since everyone is different, it can be helpful to have a tool such as a Brain Gauge to help track progress and determine which lifestyle change(s) are most helpful to you. In fact, a PTSD study using the Brain Gauge was recently completed (we will report the complete results of that in a later post), and a wide range of treatments/therapies were used, but the important facet of that study was that patients demonstrated significant improvement over the 3 month time period that they were in the program. This improvement was reflected in their Brain Gauge scores, and the data from one of those patients is shown below. Clearly, the patient benefitted greatly from the program, and from our perspective, this kind of data is pretty easy to read and understand. As an aside, we think that this kind of data is much easier to obtain and interpret than the type reported in the Table above. Patients benefit from seeing the Brain Gauge scores – it improves compliance because they can see the incremental changes in performance that are long term. Self-perception is not the best measure for evaluating small daily changes (e.g., the boiling frog syndrome – you can read about that here), and patients could become frustrated if positive results are not immediately perceptible. We’ll examine the full study that was conducted in another post. 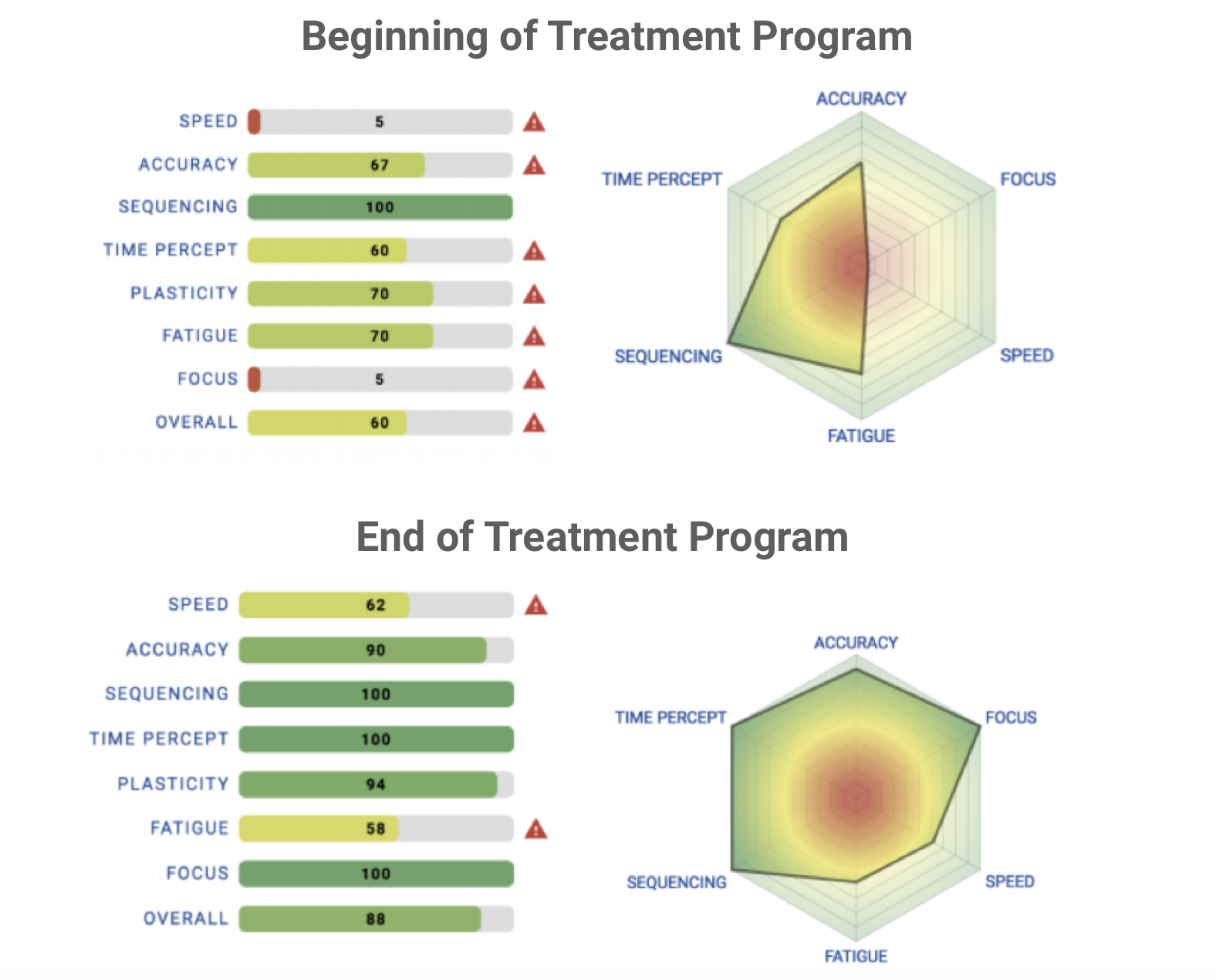