Everyone has some experience with stress. It could be acute stress from cramming for a test (or two) in high school, getting the jitters before a big race or game, or experiencing a traumatic event; or it could be a chronic dose of stress from your job, from the lack of having a job, taking care of a sick loved one, or being chronically sick yourself. Stress can come in all shapes and sizes, but do all of these scenarios affect our brains the same way? What exactly is going on in our brains when we get stressed out?

You may be the type of person who says, “I work better under pressure!” or on the other hand, maybe stress causes you to become fully dysfunctional. Besides individual variation, evidence suggests that there are significant differences in our neurological response to both acute vs. chronic as well as mild vs. severe stress (and of course there is a full continuum between the extremes as well as endless combinations of the two along each scale). It has been suggested that you can think of these continuums as an inverted U graph, as shown below. At low/mild/acute levels of stress as well as at high/severe/chronic levels, cognitive function declines. However, moderate levels of stress (particularly those associated with acute stress) can actually increase cognitive function. 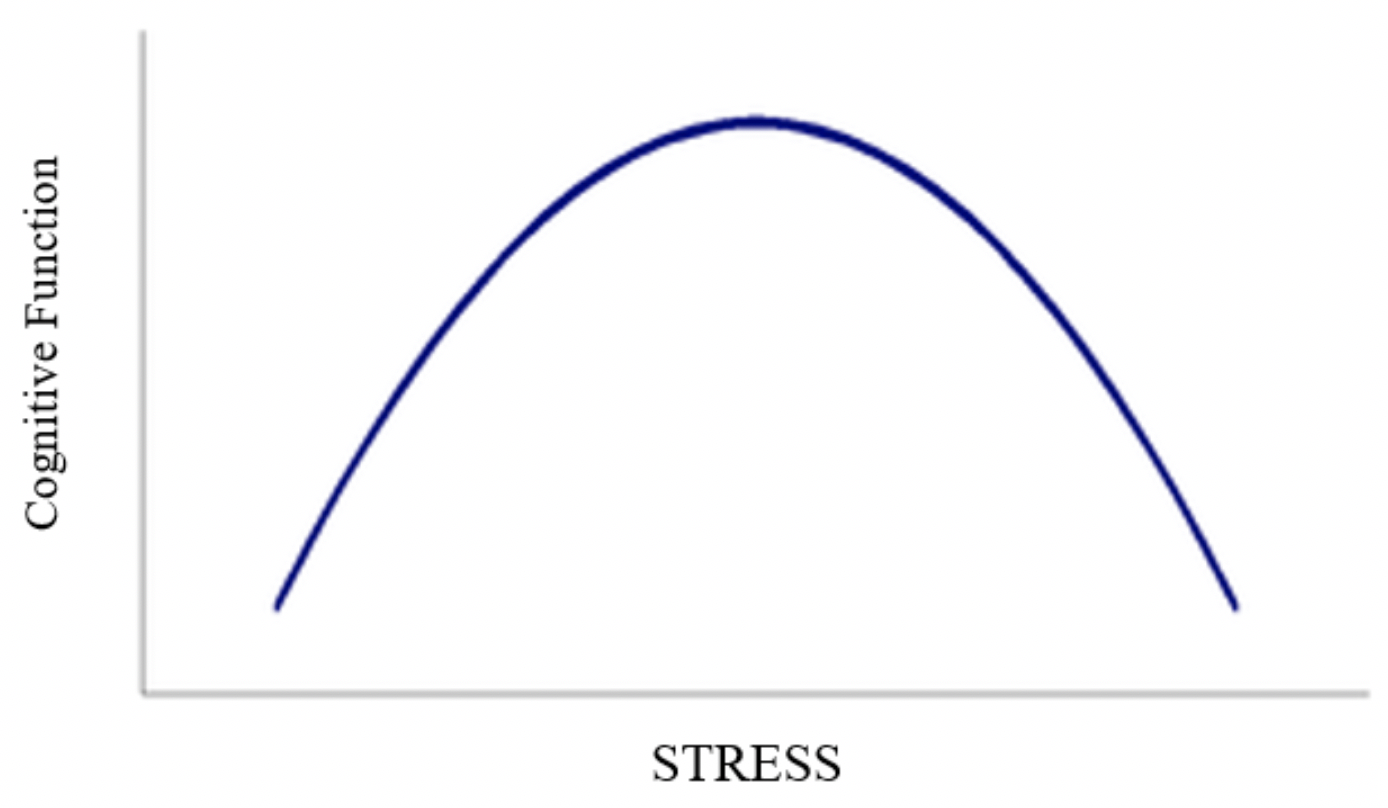 The same could be said about how the rest of your body responds to stress too—a few pre-race jitters might be helpful to get you going in your race, but if you’re stressed to the point of having a panic attack, you probably won’t perform as well.

Getting back to your brain, how do different levels of stress cause such drastic differences? While there’s not a completely clear picture painted by the current primary literature, there is strong evidence that the prefrontal cortex (PFC) and the hormone cortisol play a large role in all stress responses. Because response to stress varies so much depending on the level, duration, and individual variation, the best way to summarize the brain’s response to stress is probably to highlight a few studies conducted in a range of situations:

To start, Yuen et al. (2009) found an improvement in working memory of rats as a result of acute moderate stress. Stress in this case was induced by forced swimming for 20 minutes, being placed in a small restraint box for 2 hours, or being placed on a high platform for 20 minutes. Electrophysical recordings, radioimmunoassays, biochemical measurements, and behavioral tests were performed on stressed and unstressed control rats to compare the effects of an acute stress event on a variety of brain functions. Receptor blockers were also used in order to help determine which pathways were important in the acute stress response. Major findings of the study were:

Taken together, the study suggests that cramming for your test the night before may have had some positive effects—the moderate amounts of stress for a relatively short time increased your cortisol levels and improved synaptic transmission of glutamate in your prefrontal cortex, which is linked to improved memory and cognitive function (although skipping sleep to cram could negate that effect).

On the other side of the coin, chronic stress can have detrimental effects on the same pathways, as demonstrated by the same research group. In this study, rats were repeatedly exposed to some combination of acute stressors (similar to the previous study), but this time, stressors were repeated daily for 5-7 days. This regime of stress is meant to mimic more of a chronic dose of stress in the animals. Again, a mix of measures were used to assess changes induced by stress: behavioral measures (temporal order recognition, or TOR – note that this is related to the Brain Gauge TOJ measure), electrophysical recordings, biochemical measurements, immunoprecipitation, immunocytochemical stainings, and quantitative RT-PCR, plus the use of receptor blockers.

Major findings of this study were:

Thus, we see here that the same stress that caused an increase in glutamate transmission in the first study caused a decrease in the same glutamate transmission pathways when the stress was prolonged. This illustrates the above Inverted U graph—shorter term stress takes you up to the peak of the graph, but spending more time in a state of elevated cortisol/corticosterone levels shoots you back down the other side of the curve.

We’ve seen that acute vs. chronic stress has different effects in rats, but for those of you who aren’t a rat, you may be wondering if the effect is the same for humans. Controlled human studies are a bit harder to conduct (or at least get approval for), but there are some situations where studies can look at populations already experiencing stress. An interesting functional study that we found was conducted by Mani et al. (2013) on 464 Indian sugarcane farmers pre- and post-harvest. Here, each farmer is able to serve as their own control to assess cognitive function early in the season when input costs are high and income is low, thereby putting the farmer in a state of chronic stress. Post-harvest/post-payment testing of the same farmers catches the farmers at a point where input costs are low, income is high, and the farmers are presumably much less stressed. Testing in this case was done using a modified Stroop test to measure attention and processing speed, as well as the Raven’s test to measure “fluid intelligence, the capacity to think logically and solve problems in novel situations, independent of acquired knowledge.” The authors found significant improvements in both tests in the post-payment testing session than earlier in the season, as shown below:

Heart rate and blood pressure were also measured in the two testing sessions as a physiological measure of stress, and both of those showed significant improvements post-payment as well. However, the authors conclude that “stress cannot fully explain the impairment in cognitive function” seen by the farmers in the study. They suggest that the poverty experienced by farmers in the earlier part of the season causes a loss of attention as they are chronically mentally engaged in their financial situation, which, arguably, is a part of stress. Regardless of how you look at it and define “stress,” there was a significant improvement in cognitive function when the farmers were not worried about money and they were able to focus on the task at hand.

We could go on and on with examples from the literature, but as mentioned in previous posts, if you’re interested in improving your own personal cognitive function, it’s best for you to monitor your own personal responses to stress. Because there are so many factors that go into defining one’s personal Inverted U graph (type of stress, length of time, level of stress, your age, etc.), you can’t rely on general population averages to determine how your own brain will respond to your own personal situations. Using a Brain Gauge is an excellent way to monitor that continuum for yourself and see what level of stress optimizes your cognitive function. That’s not to say that scientific studies aren’t important—from the studies above, we learned that stress affects your prefrontal cortex and cortisol levels and it can affect your focus/attention. Thus, when using your Brain Gauge, we predict that stress will affect your TOJ score (frontal lobe pathway), and it can also affect your Reaction Time and Reaction Time Variability (focus). . In a future post, we’ll be presenting data from a study that demonstrates a method for reducing stress and shows improvements in the above mentioned Brain Gauge scores. But for now, as you alter your lifestyle to reduce unwanted stress in your life, focus on these tests to determine what factors in your life stress you the most and try to optimize your brain function.