"Marijuana", "pot", and "weed" are among a few of the street names used to refer to cannabis, a popular pyschoactive drug that is starting to become legalized for recreational use around the nation. While your parents might have warned you back in the day that "Sitting around smoking pot will turn your brain into mush!", there has never been any scientific data to prove any harmful or lasting neurological impact from cannabis use.

In fact, today, you might encounter someone who argues for the healing and medicinal powers of cannabis. It has been said to lessen tremors in Parkinson’s Disease, treat glaucoma, mitigate multiple sclerosis , and manage nausea and faciliate weight gain for cancer patients and those suffering from Chron's disease.

While the medicinal applications of cannabis seem more than promising, it is rare to find a drug with zero side-effects. Whether listening to the radio or watching late-night television, you are more than likely to come across an advertisement for a drug which, without fail, always ends in a long list of potential side effects. Last week, a news-breaking study revealed that chronic marijuana use, especially of higher-potency strains, is linked to a higher incidence of psychosis (psychosis is defined as "a mental disorder characterized by a disconnection from reality"). Mom and Dad, I guess you were right. The study tracked cannabis patients with first-episode psychosis across mulitple sites in Europe and South America between 2010 and 2015 and found that daily cannabis use is associated with higher odds of developing psychotic disorder compared to control data obtained from "never users" of cannaboids. Additionally, regular use of more potent strains of cannabis (potency of Δ9-tetrahydrocannabinol (THC) greater than 10%) had an increased risk of deveoping psychosis five-fold, and regular use of less potent strains (less than 10%) increased the risk three-fold. Yikes!

What about short term effects? What about effects on those who aren't chronic users? In a previous post about a topic called "the self-perception dilemma" we explained that while the majority of marijuana-users believe there is no permanent effect on brain function, testing with Brain Gauge revealed a lasting neurological impact of THC. Reaction Time data collected with the Brain Gauge from groups of non, occasional, and heavy users (all while in a sober state) showed a 25% faster reaction time in the non-user population over the occasional and heavy user populations. 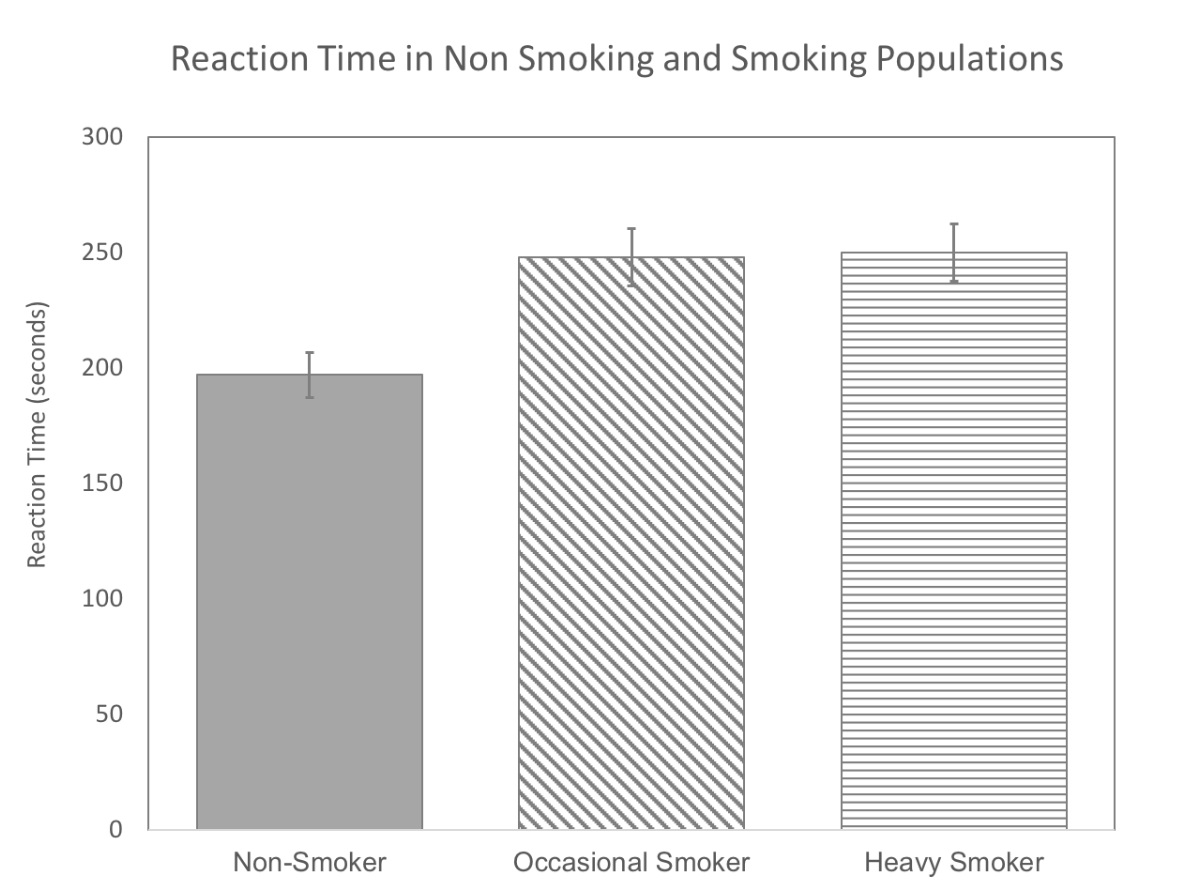 As you can see, the difference in reaction times between these groups was significant, even for those categorized as occasional users. This suggests that usage of THC, even in circumstances that may not be deemed "chronic", has a lasting and significant impact on brain health. It influences the efficacy of the synaptic connection as well as the integration of this sensory stimulus into a motor output.

Even with these hard facts, it is hard to ignore all of the previously mentioned medicinal uses of cannabis. Perhaps it is an issue of other active ingredients in marijuana coming to play. The Lancet study spoke of the effects of THC, but there are other active ingredients in cannabis that could be the source of the benefits associated with marijuana use. Cannabidiol (CBD for short) is a non-psychoactive compound found in the cannabis flower. It has been described as "safe" and "nonaddictive" and has many of the medicinal properties of THC without "getting high." Last summer, the FDA approved CBD as a treatment for two pediatric seizure disorders and announced that future CBD-containing drugs would be classified as Schedule V (in the same category with Robitussin cough syrup). German researchers have even found that CBD increased adult neurogenesis, or growth of new brain cells.

Due to a lack of CBD studies, it is difficult to know what to expect in terms of day-to-day neurological changes from CBD use. Even the Lancet study did not include CBD in its evaluation of cannabis use, but with the Brain Gauge, you can easily monitor changes (from things like CBD usage) at home. As with other supplements and medicines, testing yourself is the best way to learn how to find the best dose for YOU so that you can give you and your brain the optimum results.