If you could take a test that predicts you are headed for a degenerative state, would you take it?

Over the past couple of years, I have had several interesting discussions with clinicians using the Brain Gauge revolving around the fact that some patients score poorly and don’t like their scores. These people generally fall into one of three groups:

Now a disclaimer: everything that is in this post is an opinion, and we do not make any claims that Brain Gauge scores can predict the onset of Alzheimer’s. It’s just my opinion that it is the trend we are seeing.

One thing that prompted me to write this was from a recent discussion I had with one of those clinicians about a particular patient. That patient had a history of Alzheimer’s in their family and looking at their scores, I concluded that the patient was probably headed towards a similar fate. That individual’s scores, to be blunt, were terrible, but the clinician could not convince him that anything was wrong. 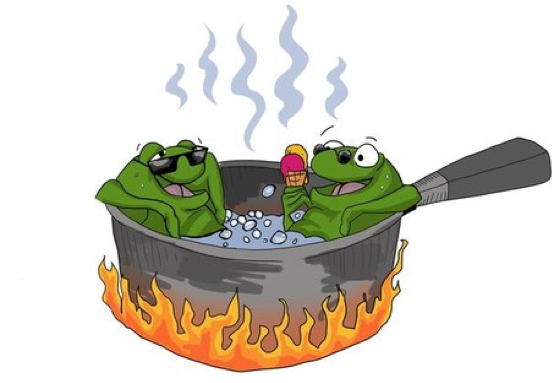 Classic boiling frog syndrome – that we already wrote a bit about here – because the individual did not notice anything prominently different from the day before in terms of how he felt, there was no reason to do anything. My father was convinced he was fine the day I took the car keys from him (and he was also convinced that he had a helicopter ride to catch from the assisted living facility parking lot the next day). Self-perception works if you break a leg – but it does not work if your brain is slowly degrading. But back to the case: the individual’s scores were not just bad overall, the relationship between 2 of the scores indicated that feed-forward inhibition was extremely poor, and it appeared to me to be a pre-diabetic state (which the clinician confirmed). There is a strong relationship between diabetes and Alzheimer’s (you can read more about that here), and I was surprised again about the cavalier attitude of someone that could potentially avoid early onset of that disorder.

Ok, so we have covered category #1, the people that don’t seem to care about avoiding Alzheimer’s or some type of degenerative disorder. What about categories #2 and #3? The people that would like to do something about avoiding a degenerative disorder if they could? First, let’s take a look at some important scores on the Brain Gauge. Typically, the Brain Gauge battery includes the tests sequential amplitude discrimination (Seq AD) and simultaneous amplitude discrimination (Simult AD). These tests are used to compute the accuracy metric (full description of that here), and typically, if there is a problem with lateral inhibition. In most conditions, there is very little difference between Seq AD in healthy individuals and individuals with some type of insult (concussion, migraine, developmental disorder, etc.). However, one thing that we noticed in conditions that are consistent with pre-degenerative states is that Seq AD is extremely poor in relation to Simult AD. Consider the data below (this displayed as you might see it to the right of the plots of your Brain Gauge scores) and remember that for raw data, lower numbers are better.

“RT” stands for reaction time, and the upper end of the normative range is around 220 msec.

RTvar stands for reaction time variability, and the upper end of the normative range is around 22 msec.

Seq AD stands for sequential amplitude discrimination. 40 microns is the upper end of the normative range.

The important relationship to consider, in this case, is the Seq to Simult AD ratio. A factor of 6 is way too high – this is indicative of very poor long-range feed-forward inhibition (and most likely insulin related). I’ll go into more detail about what feed-forward inhibition is in another post, but for now, what we do know is that this is a metric that predicts onset of degenerative conditions – well in advance – and it significantly impacts the plasticity score. The plasticity score is the one that appears on the graph displays. Low values for plasticity (which result from high Seq AD values) are not good.

So this subject decided not to intervene – after all, they felt fine. What is the proper intervention? We’ll be discussing that in future posts, but if you want to research it on your own, consider starting with the Bredesen protocol. Or any other diet/lifestyle change that is consistent with reducing the onset of diabetes.

For the past several years, I was under the impression that it would be difficult to conduct a study that would predict what individuals would be afflicted by degenerative disorders several years before initial onset. After all, if someone were given the information that a change in lifestyle would keep them from going down that path, wouldn’t they intervene and modify their behavior? Some would, but there are a surprising number of people that would not. I’ve gotten feedback from quite a few clinicians who tell me that many of their patients are simply not interested in turning things around. One quote that I heard at a recent meeting repeated was “If I have to give up processed sugar, then life is not worth living.” So my new conclusion is that finding subjects for these studies is possible, provided we can follow up on them 3-5 years down the road and see how not preventing onset of a degenerative disorder is. My initial assumption that virtually everyone would do what it takes to avoid Alzheimer’s, or some other age-related dementia, was incorrect. And there are plenty of people that are pro-active about their brain health to get subjects for the other side of the equation. We will keep you posted as we learn more!