Or maybe a better question is – Did anyone ever successfully treat it?

One of the unique things about the somatosensory system that separates it from the other sensory modalities is that there are pain receptors in the skin that project to the somatosensory cortex. All of the painful stimuli we encounter is modulated through the sense of touch. This has been well known for decades, if not centuries, and this concept did not escape medical practitioners - the idea ofremoving this part of the brain to eliminate pain surfaced in the mid 1900s.

Intractable pain – the type of intense pain that never goes away – is difficult to treat. In most cases, the patient is left with only pharmacological treatment options, which are not always a good solution. The opiate crisis is well documented: three times the amount of opioids were prescribed in 2015 as there were in 1999 and the number of deaths from opioid overdose has risen exponentially.

So how was pain dealt with surgically in the mid-1900s? Basically, the procedure consisted of opening the scull, re-creating the pain by touching the area of somatosensory cortex that was responsible for the pain, and then ablating or removing that section of brain. This method started to be routinely performed by neurosurgeons from 1950-1969, and there was significant evidence that this procedure did, in fact, reduce pain. In many cases, patients were completely relieved of pain and in many others, the patients could get by with taking aspirin rather than opiates. It appeared that these neurosurgeons were onto something. It was also evident that the entire area of somatosensory cortex did not have to be removed, and the surgical procedure was refined as the years went on.

So what happened? Why did this not become standard practice? The technique came to a screeching halt when a couple of “prominent” neurosurgeons of the day published a report in 1969 that the method did not work. In actuality, it didn’t work for them because of bad scientific practice and a very sloppy study on their part. Since they were well established, their paper – which, besides incorrectly stating that the method did not work – suggested that neurosurgeons perform frontal lobotomies to reduce pain. This procedure was not a great solution, and it was not adopted universally as a sound practice. Obviously the lobotomy would reduce patient complaints about pain, but it comes at a great price. Moral of the story is that just because someone with a big voice speaks does not mean that you should listen. What you should do is evaluate the data and determine what it teaches you.

The surgical studies that demonstrated success in pain reduction actually complemented some post WWI and WWII studies of lesions of different parts of the somatosensory cortex (the lesions were caused by bullet wounds) that led to some individuals not having pain. The area of the brain that appeared responsible for loss of pain in soldiers corresponded to the area of the brain that the successful neurosurgeons had been removing. The region that was identified as being sensitive to pain is called somatosensory cortical area 3a, and recent studies have further refined the area that is pain promoting as a subregion of 3a (anterior portion; labelled 3c in the figure below). 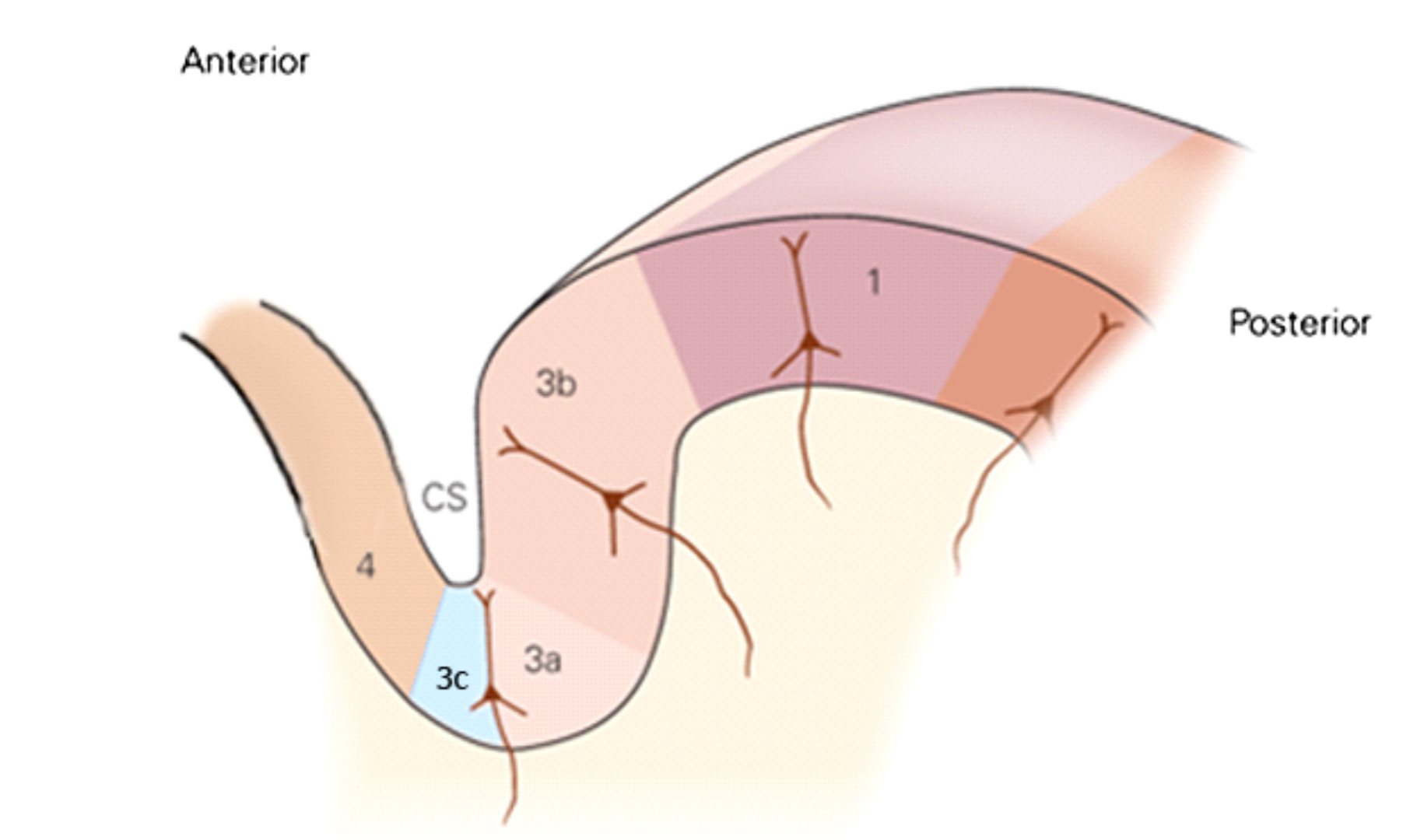 In this figure, there are several labels of different cortical areas. Area 4 is the motor cortex, area 3a/3c is in somatosensory cortex (area 3c is where the C fibers project to; C fibers are the non-myelinated nerves that are activated in the skin), area 3b/1 is the part of somatosensory cortex that interprets mechanical inputs (such as the discriminative tasks delivered by the Brain Gauge). Ablating the area 3c results in a reduction or elimination of pain.

How helpful is this information if you are not going to ablate the area surgically? First, this could be the target area for reducing pain with a number of methods – there are numerous research efforts targeting delivery of signals to the brain. These efforts include the use of TMS, PEMF, ultrasound and tDCS to modulate brain signals at specific locations. Currently, none of these methods have high enough resolution to isolate the target area. However, it turns out that all of these cortical areas are highly interconnected. 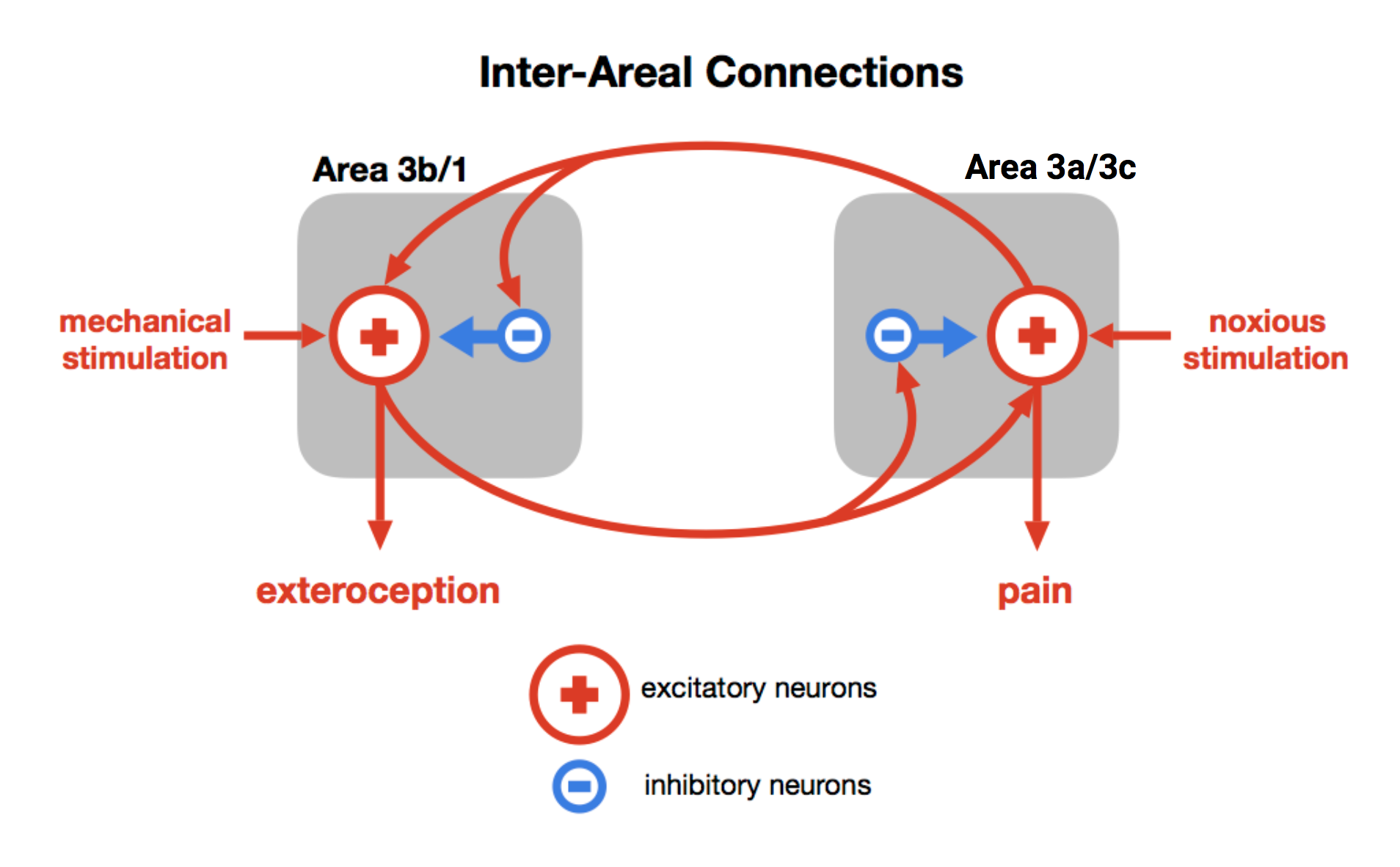 Here’s an oversimplified summary of some of those connections:
The different inputs – the mechanical and pain receptors project to different areas, and the activity generated by these different areas inhibits the opposite area. In other words, pain suppresses the response to mechanical stimuli and mechanical stimuli suppress the response to pain stimuli. Ever touch something really hot? You probably remember rubbing or sqeezing the area to lessen the pain. In other words, mechanical input to areas 3b/1 work to suppress the activity of area 3a/3c.

The figure below highlights the areas that we regard as pain promoting (red – if this area is active, it's likely that pain is experienced) and pain suppressing (activate these areas and their activity will work to suppress the activity in the pain promoting region).

Note that the pain suppressing areas include both motor and sensory cortex, so that movement as well as stimulation will promote suppression of pain.

The above description is a bit oversimplified, but the takeaway message is as follows:
(1) pain receptors in the skin project to an area in the brain,
(2) this area in the brain plays a prominent role in pain perception (remove it and pain is reduced or eliminated), and
(3) activity in the cortical areas surrounding this pain promoting region will try to suppress activity in the pain promoting region

If acute pain persists for a significant amount of time, the pain becomes chronic and the activity in the pain promoting region can become hyper-active. It then becomes difficult for the pain-supressing regions of the brain to suppress this perception of pain (a future post will describe acute vs. chronic pain differences in more detail). This is when an intervention is needed at the central level, in the brain – not just the nerves that are projecting from where pain is perceived to be. The pain promoting region is difficult to target because it is buried deep in the central sulcus (labeled CS in the picture above). This is the region that researchers need to aim their interventions at, and it's the same region that neurosurgeons were ablating in the mid-1900s.

What happens when pain suppressing regions become significantly reduced in terms of activity? This is the case with amputations – there is less input to the pain suppressing regions and the pain promoting region is left unchecked, something that is believed to contribute to phantom limb pain. That topic, and other topics in pain research, will be discussed in more detail later, as we have a number of ongoing studies in both acute and chronic pain.

Acknowledgements: A thanks to Dr. Tim Challener whose dissertation defense last week covered much of the material presented in this article. We will providing a link to his publications and dissertation when they become available.