There are a lot of factors to consider when evaluating population brain health, and there is a relationship between speed of concussion recovery and baseline brain health at the population level.

As noted in several previous posts, exercise and keeping an active lifestyle are an important part of maintaining good brain health. And yet, many sports put you at risk for developing a concussion. We hear about football on the news all the time, but athletes in other sports - like soccer, basketball, volleyball, cycling, and even swimming (apparently quite a few people run head-first into the wall or another person’s head) - are not immune to the dangers of head injury. So how do you balance the benefits of exercise with the risk of developing (or exacerbating) a concussion?

Concussions are generally regarded as a biomechanical injury: you get hit in the head too hard and your brain gets damaged. That seems fairly straightforward. But the biochemical changes that ensue are really the source of the main problems, including the development of Post-Concussion Syndrome (PCS) and/or CTE (chronic traumatic encephalopathy) later in life. Just like when you sprain your ankle, it may be the force of the twist that hurts at first, but a few days later, it’s the swelling and inflammation that continue to give you problems.

You can take steps to decrease your chances of the initial biomechanical injury (like wearing a helmet, or avoiding sports and activities where hitting your head is more likely), but you can also take preventative steps against developing more severe biochemical problems if you do get hit on the head. In a 2014 paper, Morley and Seneff 2014 extensively outline their hypothesis of “Diminished Brain Resilience Syndrome," or DBRS. The researches proposed that unhealthy brains are more easily damaged and have a harder time recovering after injury. The standard American diet and lifestyle have infamously sparked an epidemic of unhealthy bodies (obesity, diabetes, high cholesterol, etc), but they've also made our brains less healthy. However, unless you are using a Brain Gauge, assessing brain health is not as easy as stepping on a scale or putting on a blood pressure cuff, so we don’t necessarily know when our brain isn’t working at its maximum potential.

Morley and Seneff argue that the ongoing concussion epidemic is not fueled by more people getting hit in the head, but rather a result of a greater percentage of those hits in the head causing long-term problems. If your brain is healthy, it should be able to absorb the shock of a moderate impact and quickly heal itself from any damage, without causing any chronic symptoms. According to the DBRS hypothesis, this decline in brain resilience is due to micronutrient-poor diets, excessive Omega-6 fatty acid consumption (polyunsaturated lipids found in soybean and other vegetable oils), exposure to environmental neurotoxins (lead, mercury), insufficient natural sunlight exposure, and poor gut microbiome health.

In support of this argument, a review of current youth sports participation in the US shows a dramatic decrease in the top 5 concussion-generating team sports (football, basketball, baseball, ice hockey, soccer), while at the same time, concussion rates among kids have been on the rise (see figure below from Bakhos et al. 2010; SRC=Sports Related Concussion). The decrease in physical health of that age group is not disputed (more obesity, diabetes, chronic diseases, etc), but we have had no way to quantify cognitive health to document population trends prior to the Brain Gauge. Thus, we cannot prove that there has been a general decline in brain health in recent years, but it is a likely hypothesis. That decline in health may be too small to note significant declines in function, but enough to make the brain less resistant and resilient to impact, which would explain the increase in number of concussions even as fewer kids are playing sports in which concussions are more likely. 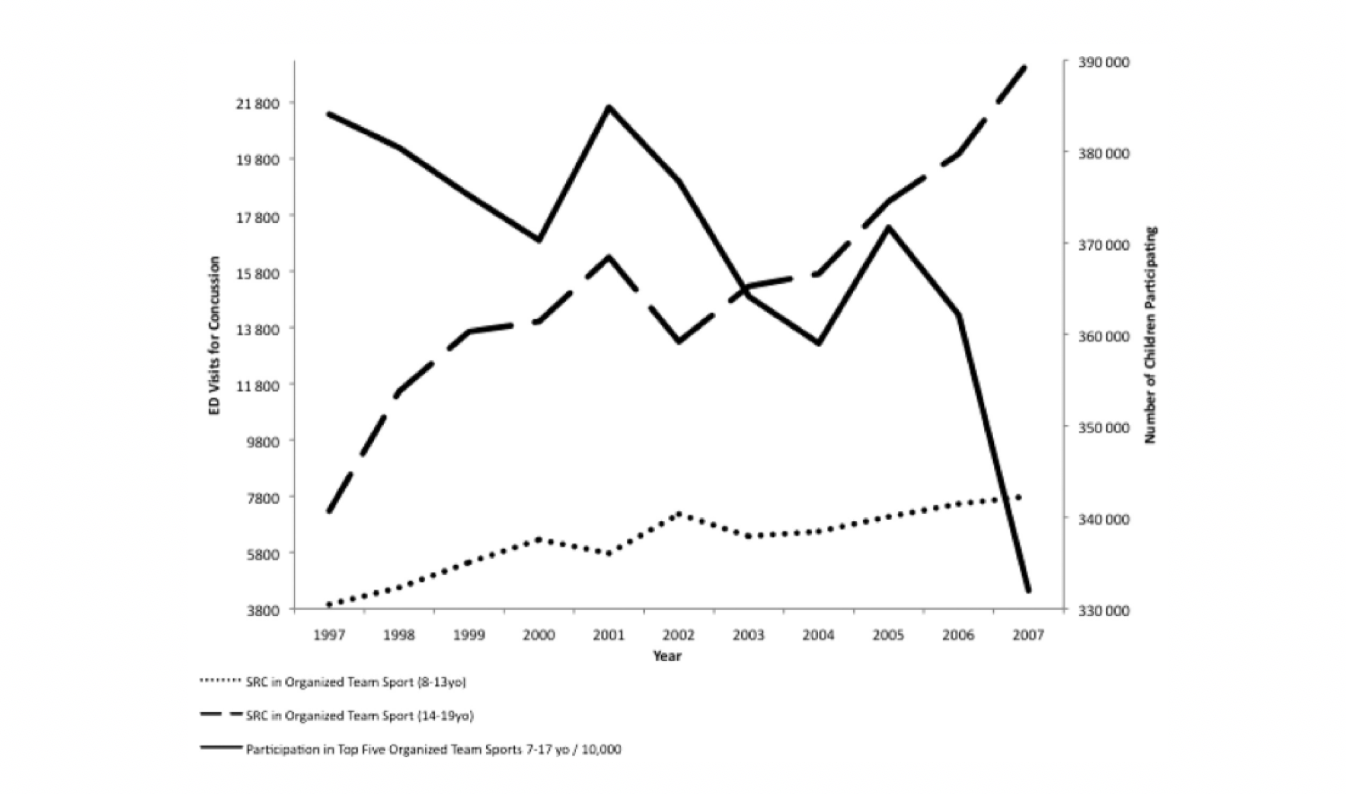 Why would brain health be declining at a population level? As noted above, a combination of our changing food supply, environmental toxins, and lifestyle (sedentary with little sun exposure) all contribute to this decline (we’ll focus on the first of those for the purposes of this article as it is likely the main culprit, but see Morley & Seneff 2014 for details on the other two).

In a previous post, we touched on how the same crops grown under different conditions can yield food with dramatically different nutrient profiles. That article dealt with two different organic methods, and the differences can be even more dramatic when compared to conventionally grown crops (which make up the bulk of most Americans' diets). One of the major differences between conventional and organic is the use of glyphosate as a weed killer on/around most conventional crops, especially with the use of “Roundup-Ready” varieties of corn and soy (there’s a lot to unwrap with that topic, so we’ll over-simplify things for the purpose of this article). Glyphosate is a chelator, which means it binds up metals, making them unavailable to plants growing in that soil. Thus, crops grown in soil where glyphosate is present have significantly lower concentrations of minerals such as magnesium, zinc, and cobalt, so it’s no surprise that the average American is also deficient in those minerals. Furthermore, glyphosate kills the microbes living in the soil, and it’s the microbes that assist plants in accessing the nutrients they need to thrive, making the plants less healthy and the people who eat the plants less healthy as well. Sufficient supplies of essential elements are, well, essential for a properly functioning brain and body. Furthermore, pesticide residue on food can interfere with the consumer directly, notably by keeping microglia turned on, resulting in increased neuroinflammation.

Besides a recent decline in the nutrient content of our food, our processed food diet, exposure to glyphosate, and germophobic mindset has left our gut microbiome vastly altered. New research is constantly coming out on the amazing amounts of influence that our gut has on our brain, but we’ll go into details on the gut-brain connection in a later post. Suffice to say here that alterations in the gut microbiome due to the factors listed above are detrimental to brain health.

So where’s the evidence? If concussions are becoming more common and more severe largely because of our diet, how does supplementing one’s diet affect concussion rates? That question is addressed, at least in part, by Oliver et al. 2018. The authors reviewed the use of the supplements creatine, curcumin, and Omega-3 fatty acids. They present compelling evidence that the use of each of these supplements does, indeed, help speed recovery after an impact and/or prevent injury from occurring in the first place. Due to the ethical problems with human placebo-controlled concussion studies, this evidence is from animal studies, but it still supports the hypothesis that our diet does influence our general brain health, and a healthier brain is more resilient and resistant to impact.

The CDC recently published guidelines for the assessment and treatment of concussions/mTBI in children (Lumba-Brown et al. 2018). After thorough investigations of the literature, they concluded that imaging (MRI and CT) should not be used as the routine diagnostic method for concussions in kids. Instead, “Health care professionals may use validated, age-appropriate computerized cognitive testing in the acute period of injury as a component of the diagnosis of mTBI.” As the Brain Gauge is used to assess cognitive function, it fits the new CDC criteria. However, based on the Morley and Seneff hypothesis, it seems that the Brain Gauge really should be used before any concussion occurs to assess if an athlete’s brain is working optimally. By being able to easily, cheaply, and accurately test brain function, parents have the ability to monitor their child’s brain health and make dietary/lifestyle modifications to ensure that even if an impact occurs on the field, their child’s brain is in the best shape possible to handle it. If you’re going to put in the physical training to get your body in shape, you also need to get your brain in shape!

When dealing with general brain health, there are a lot of variables to consider, and it is impossible to evaluate the relative importance of each. Everything is connected, and there are many factors that work together to contribute to health, both physically and mentally. With the mainstream view that the only way to prevent a concussion is to prevent an impact, we’re ignoring all of the factors that contribute to overall brain health. While it is still important to take steps to protect your head when engaging in activities that could cause a concussion, it’s just as important to take steps to modify your lifestyle to maximize your brain health so it is ready whenever danger strikes. You can’t rely on your brain to tell you when your brain is or isn’t functioning optimally, which is why the Brain Gauge is such a powerful tool. By quantifying your cognitive health and tracking over time, you are able to assess whether or not your brain is prepared for any impact, and if what you are doing to improve your health is actually working.