Drug companies may spend years to decades developing drugs, but nature has been working on it for millennia. When it comes to finding the best compounds to combat the modern epidemic of chronic inflammatory diseases, maybe turning to plants can offer the best solution. Based on a recent study published in the Journal of Nutritional Biochemistry, the evidence for that is compelling.

Lycopene, the pigment that gives foods like tomatoes and watermelon their red color, is known to help fight physical problems like obesity and cancer, but how does it effect your brain? Very positively, it appears (at least in mice). Wang et al. (2018) found that adding lycopene to the diet of mice “alleviated amyloidogenesis [plaque formation], suppressed microglia activation, inhibited the excessive release of inflammatory mediators, and elevated antioxidant enzyme activities.” The group of mice with LPS-induced inflammation but no lycopene showed memory impairments similar to what is seen in Alzheimer’s patients, but those impairments were not seen in LPS-exposed mice that had lycopene in their system. Tomatoes and watermelons sure are a tasty way to keep your memory sharp!

One downfall of the study is the dose of lycopene used—approximately 50mg/kg body weight/day. If you convert that to the amount of tomatoes you’d have to eat per day, that’s approximately your full body weight in tomatoes every day. Even as a tomato-lover, I couldn’t handle that! But that approximation is based on your average tomato, which today, has much lower nutrient levels than plants have the genetic potential to produce.

Interestingly, the way that the plant is grown can have a significant impact on the nutritional content of its fruit. Davis et al. (2007) investigated the nutritional profiles of 6 types of watermelons grown under two different organic methods—one with heavy tilling and planting into black plastic cover to control weeds (“High Input”), and one where plants were grown in a no-till system following cover crop termination (“Low Input”). While previous studies looking at the difference in nutrition between conventional and organic practices have yielded inconclusive results as to if one method is better than the other, this study showed a very significant difference between the two organic methods—as much as a 65% increase in lycopene levels between the high input and low input systems! Furthermore, different cultivars showed significantly different levels of nutrients even when grown in the same system (see figure below). 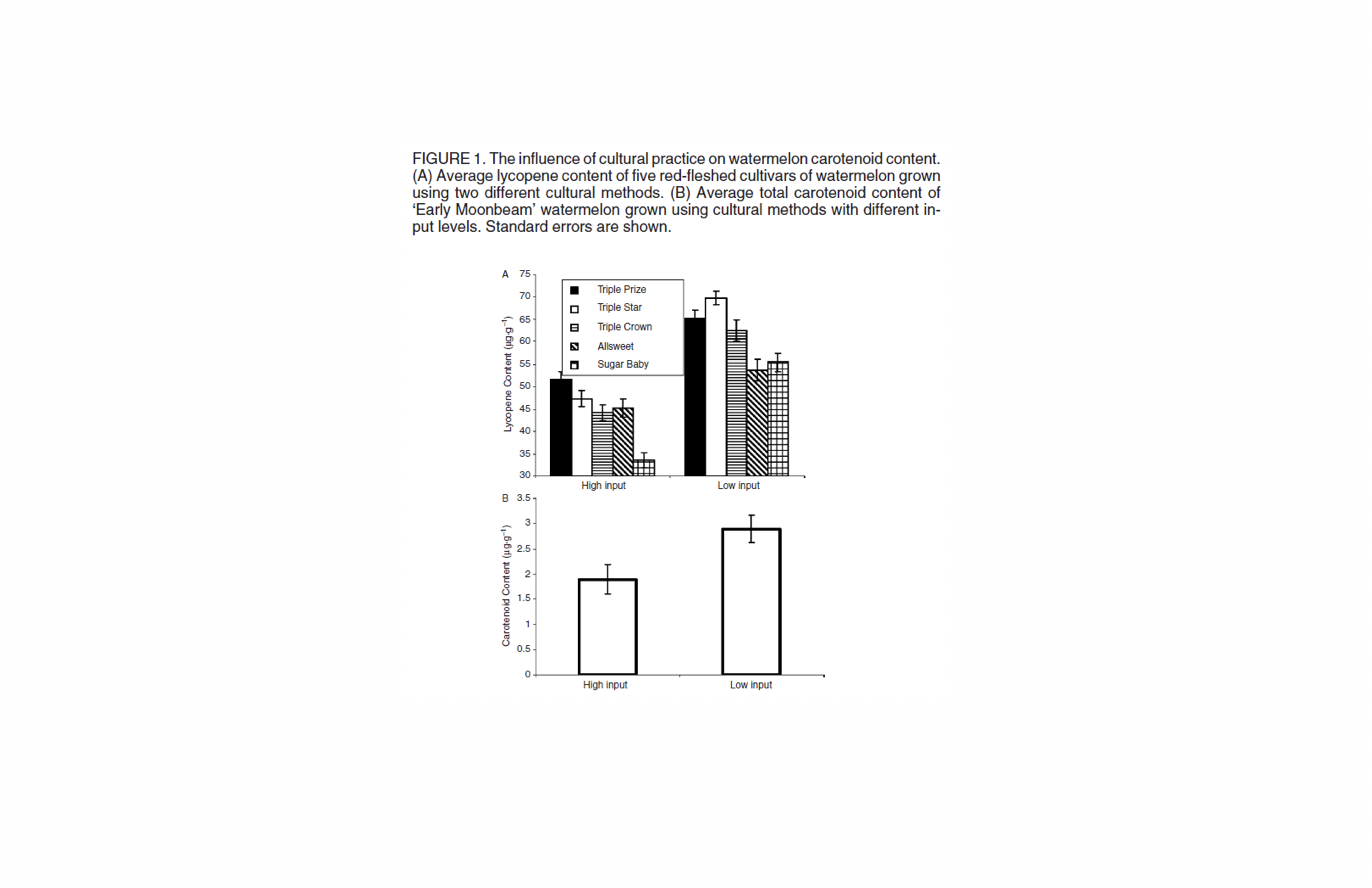 We see no problem with eating large quantities of watermelon, but your body weights worth every day is a still out of reach. So if you’re trying to get the most impact out of each bite of food, it is important to know how your food was grown, and realize that listed nutrient content of fruits and vegetables is not necessarily accurate—it is heavily dependent on how the food was grown! Going back to one of our previous blog posts (https://insights.corticalmetrics.com/fertilizer/), the way food is grown can also effect the neurological health of the farmer growing the food. Thus, not only does an organic, no-till system increase the neuro-protective benefits of the food you eat, but it also benefits the neurological health of the farmer.

Another downfall of the Wang (2018) study is that they did not test different doses of lycopene—maybe a lower dose would be just as effective. Or maybe the dosage needed to make a difference is different between mice and humans. And maybe that dosage is different even between individuals. Using a Brain Gauge allows you to investigate those questions on your own. This is the perfect time of year to find a local farmer whose farming practices help their plants reach their full genetic potential and experiment with how eating different quantities of high-lycopene foods impacts your own personal neurological health.