The short version of where the Brain Gauge came from, what it does, and how people are using it.

The Brain Gauge is a laboratory grade research tool designed to probe brain function. It is probably one of the only, if not the only, devices with superior resolution for measuring brain health that are available for the home user. Most research grade technology is only available to researchers and clinicians. The Brain Gauge, which is used by both clinicians and researchers, has been in development for 15 years and has merged state-of-the-art technology with decades of neuroscience research. Don’t let looks deceive you – it’s not a modified computer mouse. Rather, it’s about $50K worth of lab equipment crammed into a computer mouse sized device that works with any computer or laptop with USB (the Office of Naval Research funded the development, and that is why it is so low cost). 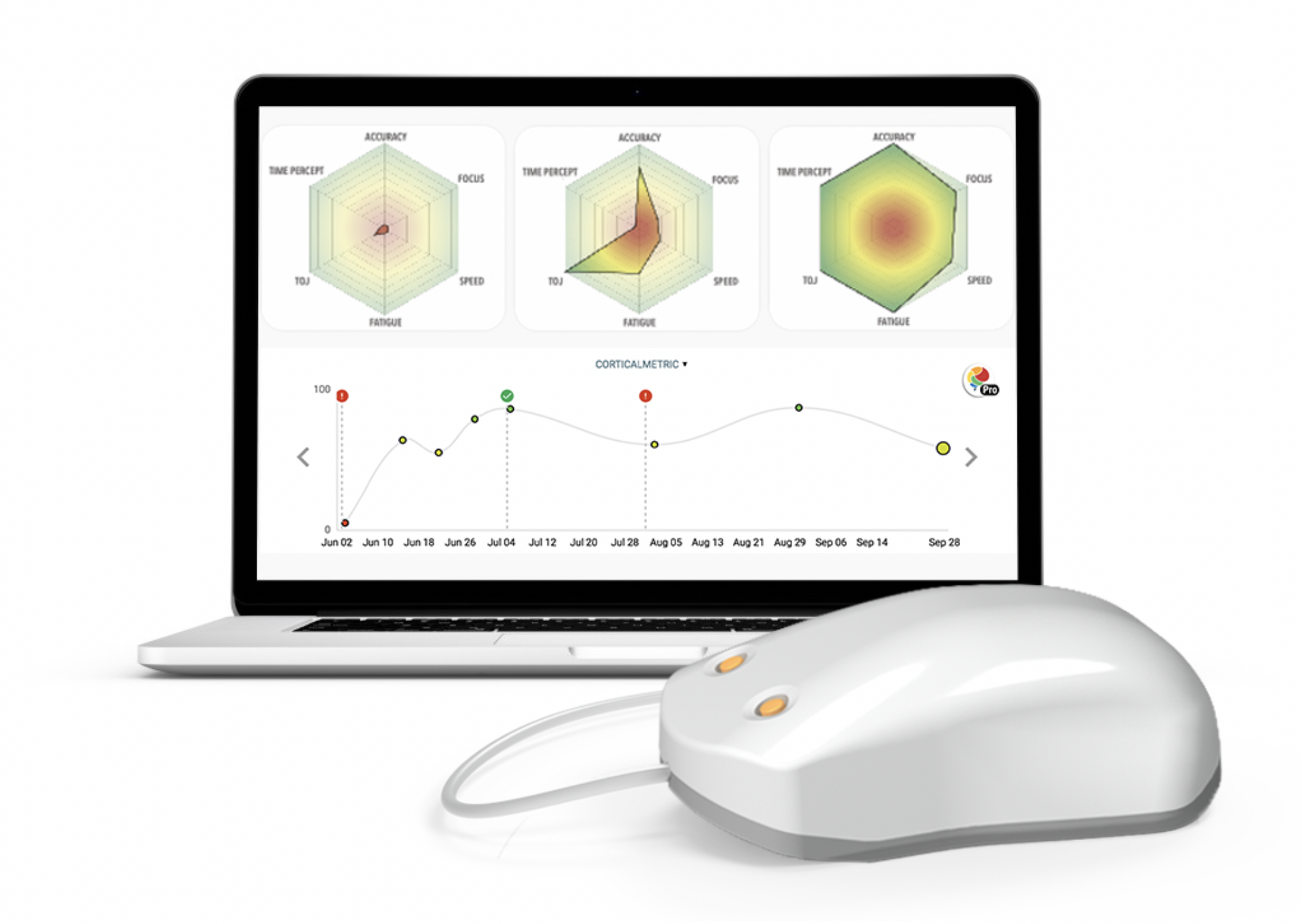 If you are self-hacking your nervous system, you should know that it’s not only the most powerful way to monitor subtle changes in brain function, but it is probably the least expensive - it’s a fraction of the cost that one imaging scan will hit you for, and the imaging scan won’t be sensitive to the subtle changes in brain function that you want to measure.
How does it work?

Technically, the Brain Gauge is what is called a neurosensory assessment tool – which means that it tests brain functions with inputs through the sense of touch. The probe tips on the Brain Gauge vibrate the finger tips with precision stimuli (calibrated to specific times, intensities and frequencies). There are different tests that ask you different questions about what you feel on your fingertips. Questions such as “Which is larger?”, “which came first?” and “which lasted longer” are not difficult to comprehend. The difficulty is in answering them if some brain function is diminished. 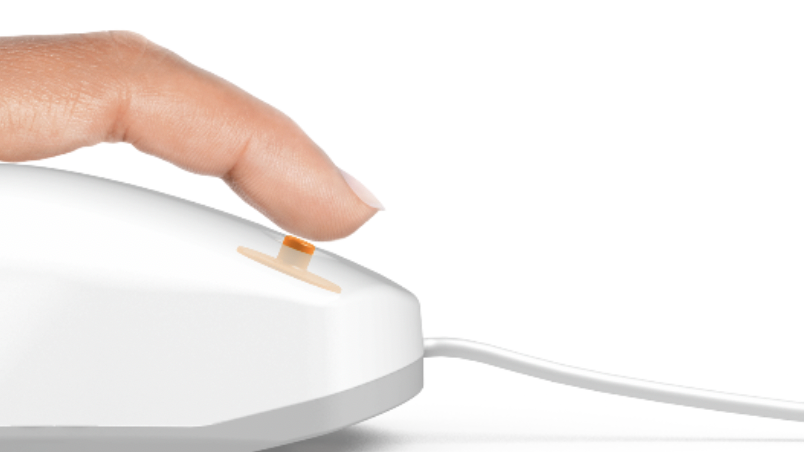 The one exception of all the tests to these types of questions is the reaction time test. The reaction time test delivers a stimulus to your finger and you have to respond as quickly as possible. While this may seem trivial, it turns out to be a very sensitive test (it’s been documented back to the mid-1800s as being related to lots of different things – you can read more about that here.

It also turns out that lots of online tests use reaction time – but they are not very accurate as they depend on computer equipment that is not laboratory grade equipment. If you take a look at another of the blogs, you can compare the difference (turns out the Brain Gauge is the world’s most accurate device for collecting reaction time!). You can read about that here.

What do the results look like? The results are pretty easy to interpret. Without any real knowledge of what the specific measures mean, the graphs intuitively tell you how you did. For example, here’s a set of bar graphs from someone that used the Brain Gauge post-concussion. Notice that the individual improved each day after the concussion (lots more green with the bars at 100% on day 14 than day 1).

What these graphs suggest is that this is a tool that can track improvements in brain health and any interventions that might be used to make brain health better.

Another example is from a study of chronic TBI patients that were treated with PEMF, and you can tell that they got better from pre-treatment to post-treatment. 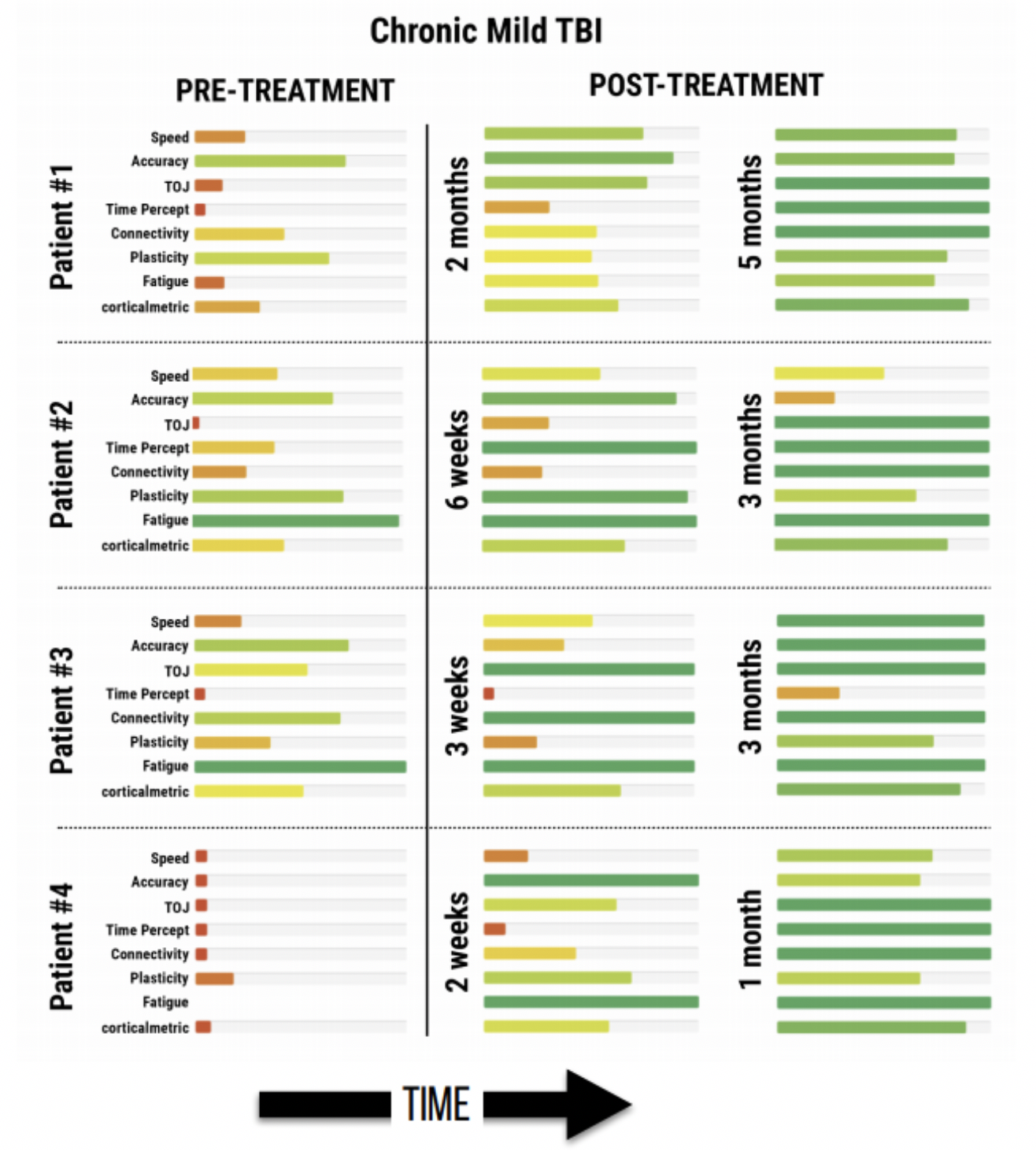 Another display option for the data is a radar plot:

The plot on the left was obtained from someone when they were fatigued; the plot on the right was after rest, recovery and morning coffee.

A summary of how to look at the Brain Gauge results can be found here. The movie below shows results from student athletes recovering from concussion. The interesting part of this is that most people are cleared by conventional testing methods long before the Brain Gauge clears them – this speaks to the sensitivity of the method. People are cleared to play routinely after 3-5 days post-concussion, but the Brain Gauge matches physiological methods in that it sees changes on most people at least 21 days post-concussion.

How sensitive is the Brain Gauge?
One of the publications (there are over 70 peer-reviewed pubs) demonstrates a sensitivity to cough syrup. Keep in mind that lots of people are given sedatives before they get a scan just to keep them from moving – and it does not impact the results of the scan. You read more about the cough syrup study here.

Another study demonstrated that college-aged individuals who drank over 60 drinks per month had altered plasticity, and you can read about that here.

Start looking around and you will quickly find examples of clinicians and researchers using the Brain Gauge. Researchers have or are using the Brain Gauge to study TBI, neurodevelopmental disorders (such as autism, ADHD, OCD and Tourette’s), pain disorders, neurodegenerative disorders (such as aging, Alzheimer’s, Parkinson’s) and the effects of drugs (prescription or non-prescription) and substance abuse.

The reason that I mention the publications is that not many biotechnologies have this much scientific foundation, and the decades that went into this science is clear, and we often get asked if the Brain Gauge has any publications (so the answer is yes, quite a few).

There are lots of examples of the Brain Gauge being used for looking at improvements in brain function with some kind of treatment. You can see a video example from LiveO2 results here. You can also read a testimonial from PureO2 showing how their patient responded to treatment (select testimonials on the link below). The military has been sponsoring the development of the Brain Gauge. They mention that this will be the first standardized measure of mTBI – something that is missing from their toolkit.